Plus a Special DEAD NO MORE Prelude!

The biggest heroes, the biggest creators and the biggest stories in comics are coming to FREE COMIC BOOK DAY! And Marvel is bringing a second all-new title to comic shops this year!

Steve Rogers is returning to comics this May, and you can get your first taste on FREE COMIC BOOK DAY. Today, Marvel is pleased to unveil FCBD CAPTAIN AMERICA #1, featuring the reinvigorated Steve Rogers as Captain America! Nick Spencer and Jesus Saiz bring you one of Steve’s first adventures since his dramatic return in the pages of AVENGERS: STANDOFF and get you caught up just in time for the release of Captain America: Steve Rogers #1, coming to comic later that month!

But that’s not all! FCBD CAPTAIN AMERICA #1 will also feature a second all-new story and a special prelude to DEAD NO MORE, giving fans their first look at the blockbuster storyline coming later this year. If you got a chance to bring back someone who died, would you? And how will CLASSIFIED deal when ones they thought long dead once again walk the earth? Find out on FREE COMIC BOOK DAY!

This May, be there as Steve Rogers re-enters the fray and witness the startling secrets of DEAD NO MORE. No fan can afford to miss out on Marvel’s two all-new FREE COMIC BOOK DAY offerings this year – available May 7th at participating comic shops nationwide! 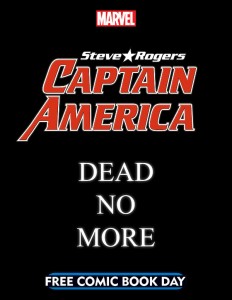