Why I’m Stoked AND Terrified For ‘Agent Carter’ 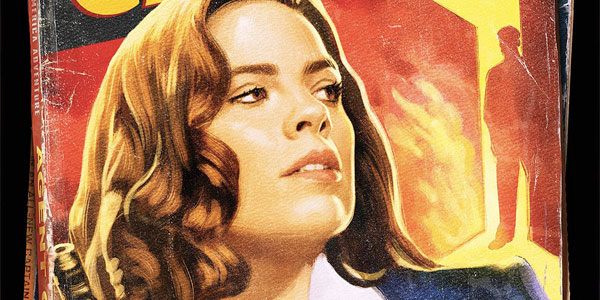 Marvel’s Peggy Carter is coming to ABC next season, and I’m both really excited and really nervous.

Last week, ABC officially announced we’ll be seeing Peggy Carter among their new TV lineup, marking the second Marvel universe show to hit the air.  This is good news, for a bunch of reasons.  Obviously, Hayley Atwell’s Agent Carter is an awesome character.  She proved to be one of the best female characters in Marvel’s cinematic universe in Captain America: The First Avenger, smart and capable and much more than some boring damsel in distress type.  But it was the Marvel short Agent Carter that proved what a badass Peggy can be, and how she’s more than strong enough to carry a story on her shoulders alone.

So in essence, the Agent Carter short proves that this show idea can work, and work well.  And since the TV show will be set after the end of World War II, we’re going to see a new area of the Marvel universe, as SHIELD is built from the ground up, with Carter and Howard Stark as two of the heavy lifters.  That whole time period is ripe for opening fun new avenues to explore, which can further flesh out the ever-growing Marvel universe, while providing the pulpy fun of a period piece, a niche Agents of SHIELD has never quite managed to find for itself.

Lest we forget, too, Agent Carter will be the first female-lead Marvel property, and even though it’s on the small screen, that’s a huge step in the very welcome sense of diversity Marvel is committing to the typical white, male comic scene.  So there’s lots to be excited about– and we haven’t heard anything about cast or guest starts, nor have we seen a split second of footage!

But while the potential positives of this show are numerous, that means there’s a much greater risk involved if Agent Carter doesn’t come together.  The big one, story-wise, is having this show take place after the reveals of Captain America: The Winter Soldier.  It’s easy to SAY Hydra has been hidden within SHIELD from the very beginning… but managing to pull this off without Carter and our leads come off as ignorant or stupid will be a definite challenge.  There’s no way they can avoid this storyline entirely, but if they focus on it too much, I can’t see it winning any favors for the competence of our heroes.

There’s also the echoes of Agents of SHIELD hanging over the head of this new show.  While Agents isn’t as bad as it was at the start of the season, it still isn’t very good.  I went in to that show fully expecting it to be awesome, and almost a full season later, it hasn’t come close to meeting those expectations.  I realize Agent Carter will be its own show entirely, and it seems like another home run as far as concepts go, which is good… but Agents seemed like a total win ahead of time, too, even though the end result missed the mark.

And the most exciting aspect of Carter— our female lead– is also what has me most nervous.  Atwell proved she’s great in the role, so I don’t have much doubt she’ll be good on the small screen… but if this show fails, I’m hoping Marvel is savvy enough not to discredit female protagonists elsewhere in their cinematic universe.  Thankfully, Marvel seems hip enough not to let one flop, or under performance sour them on an idea (see again: Agents of SHIELD), so I’m hopeful that not even a poor showing from Agent Carter– in terms of ratings or quality– will close doors for other stories about Marvel’s women.

So with Agents of SHIELD’s mediocrity still fresh in my head, I’m avoiding my better judgment to remain very, very excited for Agent Carter.  It’s a great environment for a story, and we already have a solid lead who has proven herself with this character (twice!).  I’m hoping this time around, Marvel’s TV outing lives up to my high hopes.