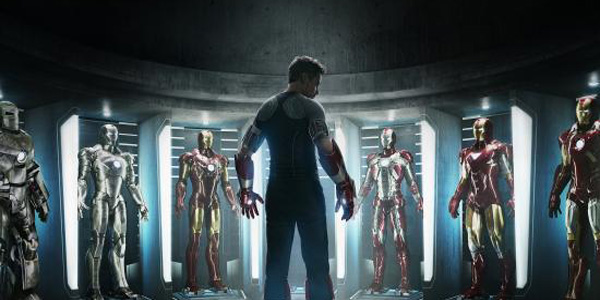 Marvel’s latest installment in the Iron-Man series is a joy to watch, with thrills and a sense of fun that transports you… but it also features a fascinating subversive streak that stays with you long after the credits roll.

This piece will have some serious spoilers for Iron-Man Three, so consider yourself warned– if you haven’t seen the movie yet, you probably shouldn’t read this!

There was a lot to love in Iron-Man Three, but the thing that made the movie really stand out among its comic book peers is director Shane Black’s incredible penchant for messing with our expectations, and turning everything on its ear.  There’s twists and turns to Iron-Man Three‘s characters and narrative that made this an exceptional and delightfully offbeat entry in Marvel’s fantastic cinematic series.

Coming off the astonishing success of The Avengers, it would have been very easy for Marvel to rest on their laurels as the latest Iron-Man movie kicked off “Phase Two” of their cinematic universe.  But instead of a standard, by the book sequel, we got a clever and complicated movie, with lots of grey area filling in the moments between remarkable action set pieces.

It’s that grey area where Shane Black truly shines, and Robert Downey Jr. is totally on board for the ride, as he delivered his best performance yet in the series, as the stripped down, PTSD riddled Tony Stark.  At this point, there’s no arguing that Stark has proven himself a hero– he helped save the world from an alien invasion, for God’s sake– but Iron-Man Three was quick to showcase the demons he still faces.  Not the much talked about anxiety attacks (although they are wonderfully well handled)– it starts way before Tony ever stepped into his first suit of armor, as the younger, more callous industrialist feigned interest in a pretty scientist’s research in an attempt to bed her, while overtly making fun of the pathetic Aldrich Killian.  There’s a coldness to Tony’s attitude in these opening moments darker than we had ever seen before… a narcissism that eclipses the attitude he eventually measured with his innate charm in the present day. This Tony is a real jerk, and as we fast forward to the present, we realize that despite his heroics, he still has the tendency to be just as much a jerk.

Stark’s early interactions with Pepper, with his expensive but thoughtless Christmas gift and holing up in his workshop while remotely controlling a robot to entertain her upstairs, can be blamed on his severe post- Avengers problems, but it also establishes that Tony is still very much a dynamic character, who needs to change now more than ever.  That gives him a meaty arc in his third solo outing, and one that keeps subtly spinning sideways, from his stupid decision to endanger Pepper and himself by giving The Mandarin his home address, to unexpectedly smarmy interactions with Harley, the little kid who should have been, by all accounts, incredibly irritating.

And let’s consider the remote controlled armors, which help deliver a thrilling final act. Tony straight up stole the remote armor concept from Whiplash from the previous movie.  Yes, he’s using it for more virtuous reasons– but no matter how altruistic his end, his means are really the same as Obidiah Stane and Justin Hammer before him.

I’m not knocking Stark here, in fact I couldn’t be farther from it– I find it incredibly interesting that Downey could capture these many shady edges to the character, while still pulling off the cool, confident, good man that the world has, at this point, accepted him for.  That the movie could feature a hero so dark and, in his own way, morally compromised and stay as light and fun as it is serves as a true testament to Shane Black and his writing partner Drew Pearce.

Of course, the most talked about (and impressive) subversive aspect of Iron-Man Three is the reveal that Ben Kingsley’s Mandarin is a fraud.  This is a twist in a number of ways– as far as storytelling, it’s a genuinely shocking surprise, that comes out of left field but still makes sense in context.  It also really throws the audience off– once the reveal was out of the bag, I honestly had no idea where the movie was going to go next.  The twist can be viewed as a double-whammy, as some fans are already scouring over alleged hints that Kingsley’s drunken mess of an actor is actually another front for the real Mandarin, hiding in plain sight behind the illusion of the buffoon (much like the movie’s surprise did so expertly in the trailers).  That’s the sort of fun twist that could all be in fans’ heads– or something very intentional on the parts of Marvel’s powers that be– but I’m totally looking forward to analyzing the scene for hints and clues as many times as possible.

I kind of hope Mandarin really IS a fake, though, because that makes Killian’s plan way more interesting, and lends itself to a much stronger political statement hidden in this popcorn blockbuster.  If Killian truly did invent The Mandarin, he likely co-opted icons from the Ten Rings organization we’ve seen since the first Iron-Man, exploiting them as much as he did the American public his actions terrorized.  Through Killian, the movie asserts that war-mongering big business, and the morally corrupt people behind it, are the true terrorists, propping up and hiding behind a menacing villain of their own design.  That’s a ballsy kind of statement… especially in a Disney movie starring a man in a flying suit of armor!

Honestly, I can’t really say that Black was explicitly going for that message with his twist, but it’s pretty on the nose when you consider it– the corporate suit IS the terrorist.  What it means that the US government can’t locate, let alone take this guy down– leaving it up to essentially another businessman with a clearer sense of morality– is a whole other can of worms, but either way this seems like a wildly challenging and complex idea to be housed in a Summer blockbuster like this.

Maybe I’m totally stretching on that last idea.  I’ve only seen the movie once so far, so I can’t be sure… but in any event, I CAN say I’ve heard, read and engaged in a large number of conversations about this movie over the past week. Some people agreed with me and dug it, some hated it… but everyone seemed to have an opinion and a different interpretation of what they saw.  At the end of the day, that’s what I want out of any movie– we’ve seen big movies like Prometheus inspire a similarly passionate debate among geeks, but the talk over Iron-Man Three seem to be reaching way past the standard “it sucked/ it was cool” arguments.  This is a movie that starts real conversations, that leaves you with ideas and concepts and feelings to mull over and talk about.  And it does this on top of being incredibly entertaining, breathlessly paced and a complete blast to watch from start to finish.

My first reaction was that I really, really liked Iron-Man Three… But the more I think about this movie, the more I realize I absolutely loved it.