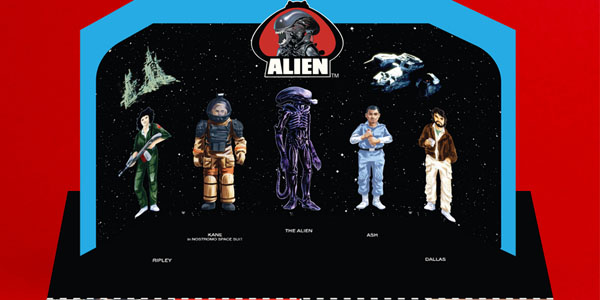 Super 7 will launch the presale for their awesome retro Alien figures at Comic Con, and they’re offering up some great exclusive incentives for convention goers.

Super 7 has been working on their Alien ReAction Figure collection for a long time now, and the figures’ presale will officially begin at Comic Con.  In case you’re not sure what this ReAction Figure project is all about, here’s the Cliffs Notes:

When Alien came out in 1979, Kenner (who made the original Star Wars toys) crafted a set of five figures for a proposed Alien toy line in a very Star Wars-y scale and style.  The figures were never produced, for a multitude of reasons, but Super 7 managed to chase down all five original prototypes, as well as licensing approval from Fox, so they will finally be making the unmade toys, over 30 years later.

That’s cool!  And to celebrate the launch of their preorders for the series, Super 7 are offering up some very clever, period-appropriate exclusives and incentives at SDCC.  I think my favorite is the Early Bird set, which is really just a preorder for the set of five Alien figures, to be delivered later this year.  But in the meantime, you get a Star Wars-style kit complete with Alien stickers, photos and all the other swag the Star Wars Early Bird set came with.

But Super 7 is also having some alternate timeline fun, with their “Kenner Prototype” figure two-pack.  The concept here is that these unpainted versions of the Alien and Kane in his space suit were made up for Toy Fair ’79, so come in a date-appropriate white Kenner box, with a fabricated press release.  Of course, these figures were actually made in the present, but the historical angle of the concept is delightfully meta, and really makes me want to give them my $40.

The toymakers will also offer two freebies at their booth– some slick branded figure stands for your collection (given away when you sign their mailing list at the show) and a vintage style catalog, showing off the Alien toy line the way Kenner used to in the early 80s.

Each one of these exclusives does a great job of playing into the retro-cool vibe of this project, and I kind of desperately want them all.  Read on for a closer look at each of Super 7’s SDCC exclusives, as well as lots of photos that will bring you straight back to 1980 in all their retro goodness:

In 1979, prototypes for 3 ¾” action figures for the ALIEN film were developed but never manufactured.  Through our network of industry and collector contacts, Super7 has unearthed reference material and original 34-year-old prototypes and will now make these “lost toys” a reality. Under authorization from 20th Century Fox, Super7 will produce the full series of ALIEN toys as part of our ReAction Figure Series (Retro-Action).  Each is stylized exactly as items from the “golden age” of action figures with approximately five points of articulation, accessories, and period-authentic blister card packaging. 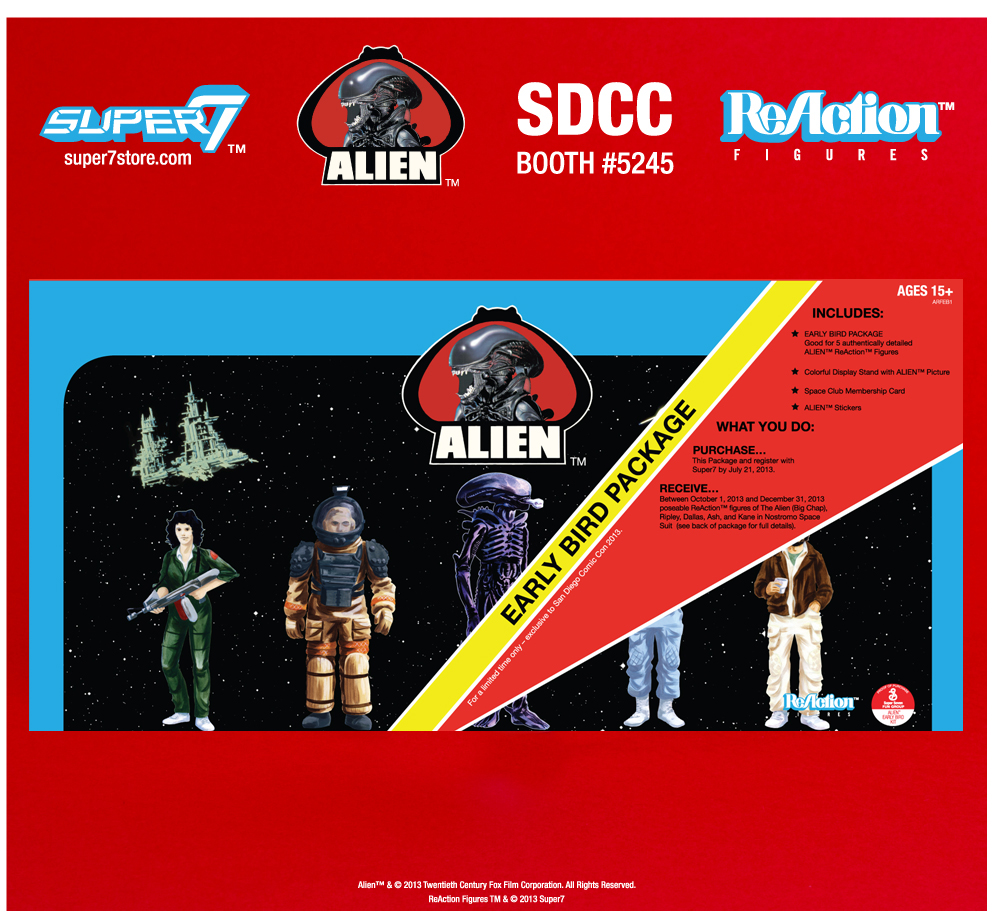 Preorders for the ALIEN ReAction Figures will begin at San Diego Comic Con….and fans who preorder a set of the five ReAction Figures at our Super7’s booth will get more than they ever expected – a full Early Bird Package containing:

But the best part is this Package is FREE when you preorder your set of five figures at SDCC!  The five ReAction Figures will be complete with accessories and on Blister Card packages –
* THE ALIEN (“BIG CHAP”) – with removable transparent dome, extendable jaws and glow-in-the-dark head!
* RIPLEY – with Flame Thrower
* ASH – with Motion Detector
* DALLAS  – with Flame Thrower
* KANE in NOSTROMO SPACESUIT – with removable helmet and transparent visor

The Early Bird preorder for the five figures is only $100.00 in the Continental US, Rest of the world $125 (+tax) and the cost includes shipping fees!  No additional postage necessary!    The figures will ship between October 1~December 31, 2013, and the Early Bird Package will be handed to you on the spot at SDCC. 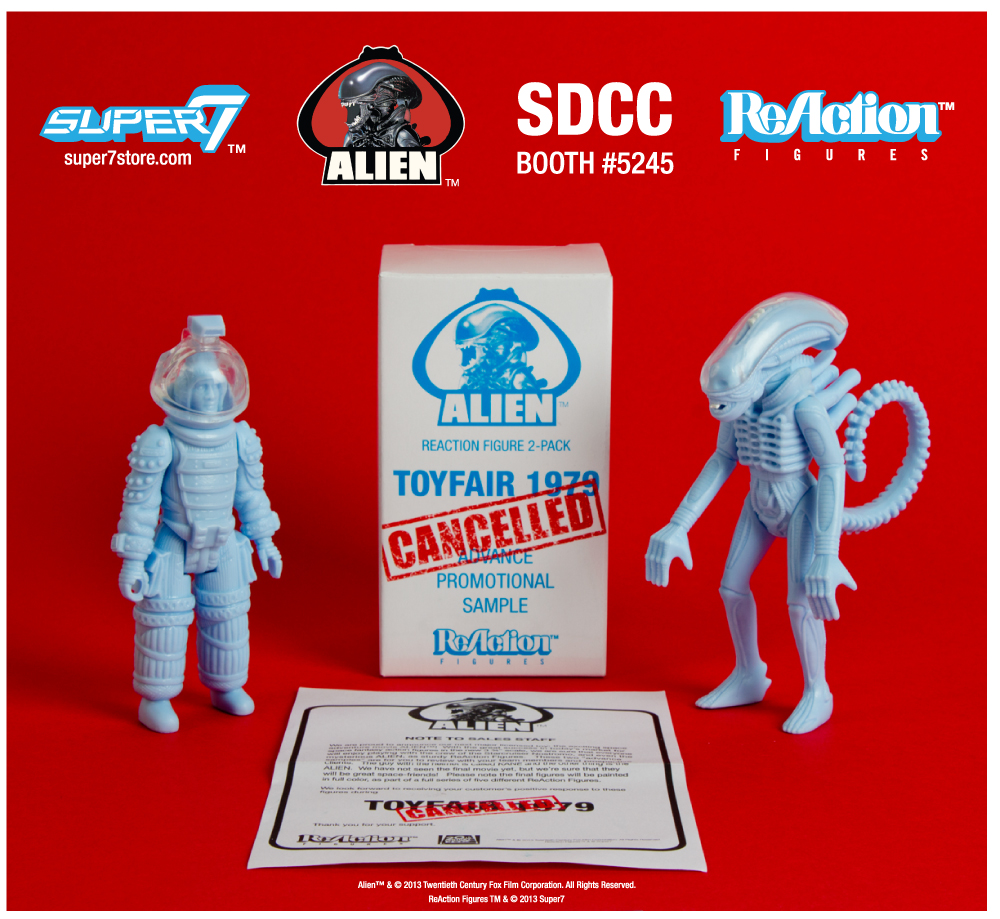 Super7 tracked down a retired toy sales representative who had a storage unit filled with old catalogs and toys from the 1970s, including a most amazing find:  cases of “ALIEN SALES SAMPLES” designated for 1979’s Toy Fair!   Each package contains two figures – the ALIEN (Big Chap) and KANE (in Nostromo Space Suit) –  in unpainted “test shot” blue plastic.  These samples were intended for distribution to wholesale buyers looking for the “next big space movie” product in the 3 ¾” scale.   Ultimately, the line was cancelled –as shown by the large red stamp on the box and enclosed letter to the sales staff – and these samples never were taken to the trade show.

Okay, full disclaimer: These two-packs are brand new and we are joking about “discovering” them.  As far as we have been able to ascertain, ALIEN figures were never displayed at any toy show or event, which made us wonder what really happened behind the scenes.   Taking that curiosity further, we decided to create “the sales samples that never existed” and turn it into fun collectible…and a great way to kick off the ReAction Figure series!

Super7 will bring a limited quantity of the “Discovered Sales Samples” to San Diego Comic Con!  This will be the first opportunity for collectors to own the ALIEN and KANE in ReAction Figure format – five points of articulation, extendable inner jaws, removable clear dome, removable clear space helmet.    Each two-pack in “cancelled” packaging (including the sales staff letter) retails for only $40.00. 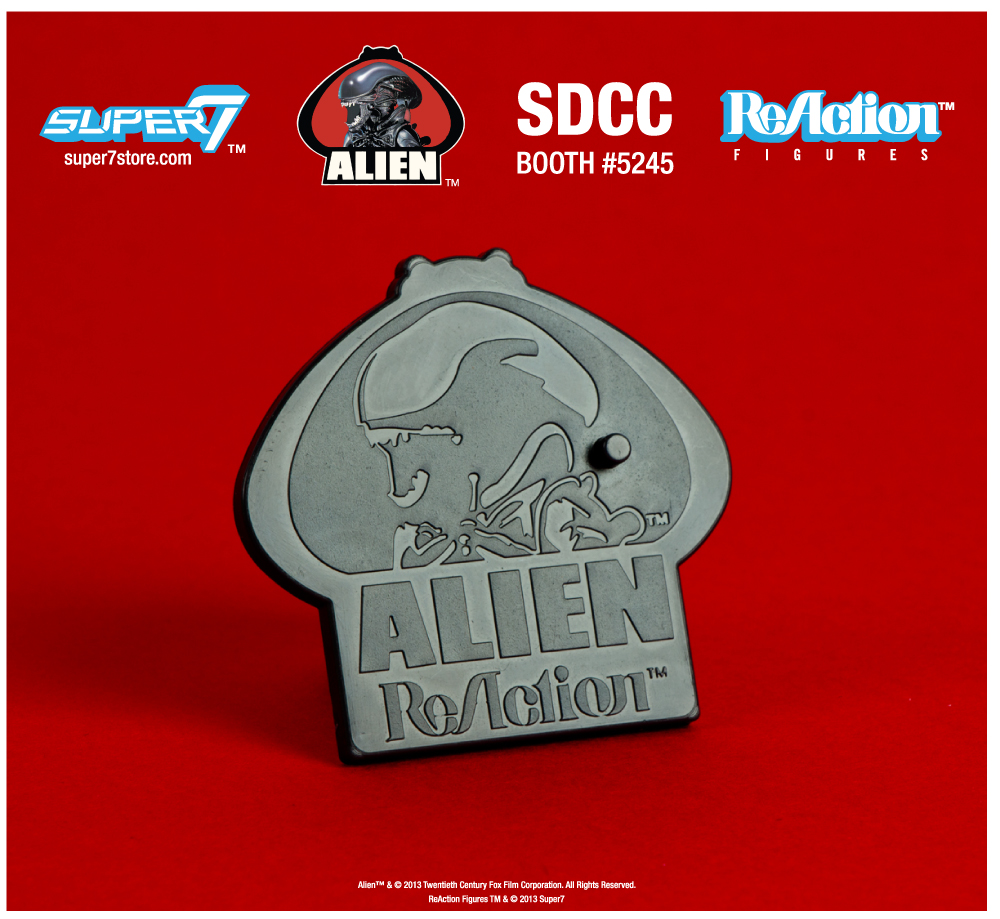 Classic 3 ¾” figures are known to have holes in the heel of the toy, and ReAction Figures will keep that tradition alive!   And if there is a hole in the foot, there needs to be a peg somewhere to connect…

Super7 has created an Exclusive Base in the shape of the ALIEN ReAction Figure logo complete with said peg.  These bases will fit the upcoming ALIEN ReAction Figures as well as most vintage 3 ¾” scale toys.   Visit the Super7 booth, sign up for our mailing list, and you will receive a Figure Base for FREE! 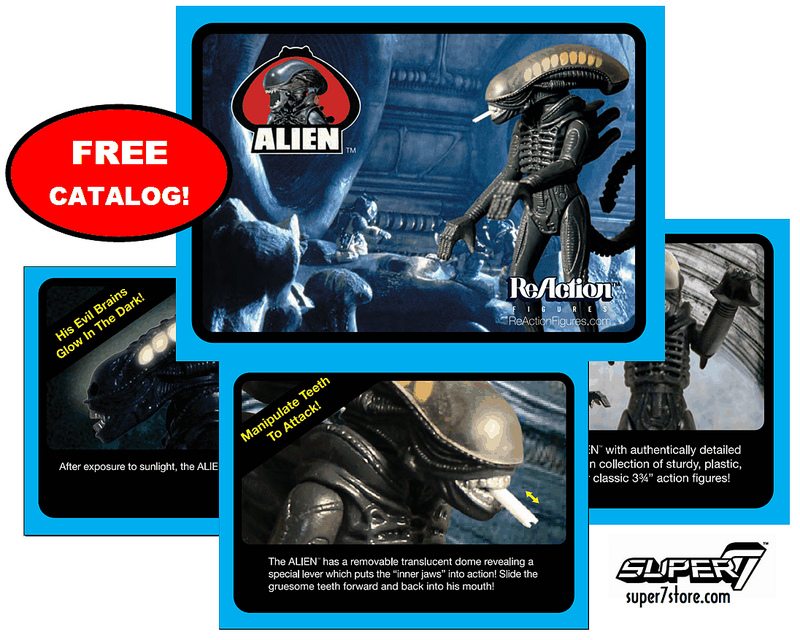 Thirty-four years in the making!  Get the lowdown on Super7′s plans for the ALIEN ReAction Figure line in our “vintage style” catalog!  A limited quantity of this popular catalog have been printed for San Diego Comic Con – and these will be available for FREE!    Formatted exactly like the 3 3/4” space-figure booklets of yesteryear, this 12-page catalog features brand new information and photos on all five of the ALIEN ReAction Figures.    Much of the catalog text and imagery is adapted from original toy packages and sales materials from the 1979 ALIEN product line, continuing the fun, retro vibe of the ReAction Figures themselves.

For more info on all of these items, please visit our official site at http://www.super7store.com
Alien™ & © 2013 Twentieth Century Fox Film Corporation. All Rights Reserved. 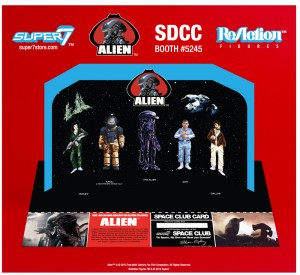 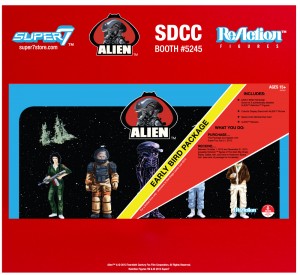 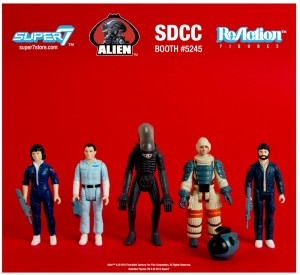 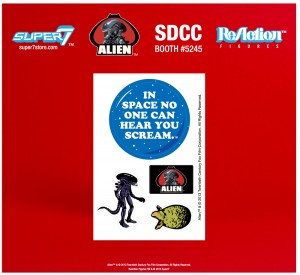 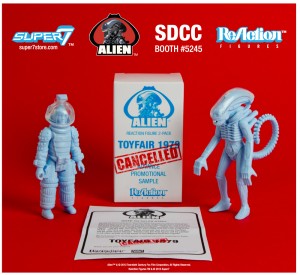 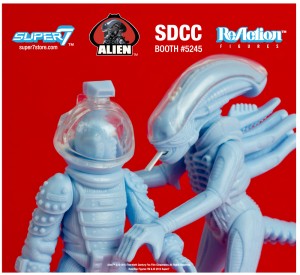 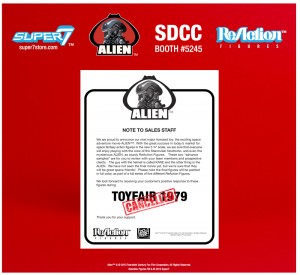 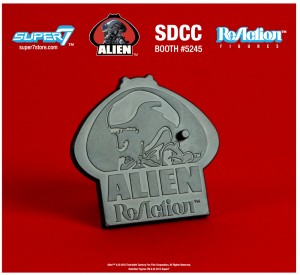 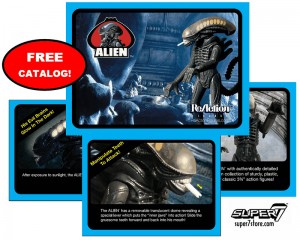 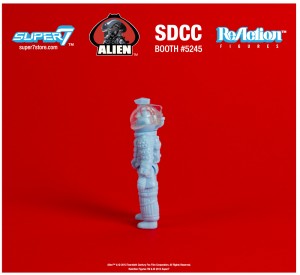