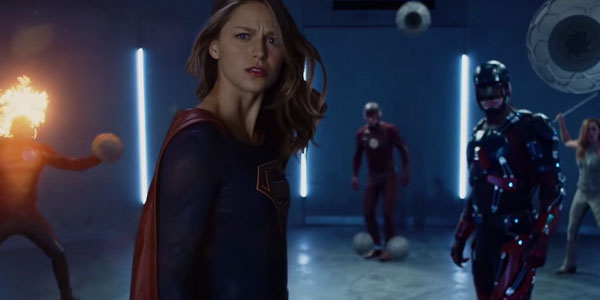 DC’s CW superheros get a little bit of a warmup before their season premieres.

The Superhero Fight Club was a promotion started by DC/CW to showcase their shared Arrowverse and tease the season three and season one finales of Arrow and Flash respectively; as well as tease the coming of DC’s Legends of Tomorrow.  You can see the original here.

However, now it appears that the club has been updated.  Check it out.

Since the original, the Arrowverse’s roster has increased significantly, adding Supergirl (Melissa Benoist), Firestorm 2.0 (Franz Dremeh), and White Canary formerly known as just the Canary (Caity Lotz), and of course The Martian Manhunter (David Harewood) who sadly doesn’t fight but is still a cool presence.  The original was a way for the team to blow off steam and practice.  It seems that 2.0 (or 8.0 depending on who you ask) is more of a training facility like the Danger Room, but hosted by an AI that looks suspiciously like GLaDOS.

While this one is a bit more campy than the original, it’s a lot of fun to see Supergirl interact with the rest of the heroes.  The villains didn’t get the showcase they got in the last fight club, but the inclusion of Diggle, Felicity, and Cisco as commentary behind the glass lightens up the mood; and considering how dramatic the premiere episodes of Flash and Arrow’s new seasons will be, it was probably a good idea to project a little bit of levity beforehand.

Be sure to check out the Flash’s season three premiere, “Flashpoint” tonight and 8PM/7PM Central and Arrow’s “Legacy” tomorrow, at the same time, only on the CW.