Is Superman Still A Hero? 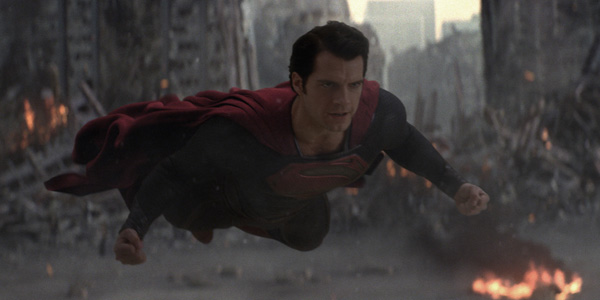 There are a few things in the comic book world that seem absolute; Batman does not use a gun, Uncle Ben stays dead, and Superman does not kill. Recently those absolutes lost their power, and comic fans are upset.

Superman was the subject of a recent op-ed piece on MTV geek, the topic: Should Superman kill?

For anyone who has grown up as a comic fan, the fact that there is always another way has been Superman’s main moral code. He has even been nicknamed the big blue boy scout, just to reaffirm that he is a good guy.

In the MTV article they said,

“So while in “MoS,” Superman lets out a scream of primal rage after executing Zod, he’s pretty much fine a scene later, happily trying to murder members of the US Army by tossing satellites at them.”

There were a few leaps in logic in the article, and from my perspective they missed some important facts in the film. After leveling Metropolis Superman had Zod pinned down, but Zod using his heat vision was about to kill a family.

This was not the Superman we have come to know, he is a new hero. He has hidden his powers for his whole life and he was just then embracing his abilities. He has also never faced anything that could match him punch for punch.

In that scene the writers were able to convey the conflict and the pain Clark faced while holding on to Zod, giving the audience the view that there was no other way. He did not have a phantom zone projector to transport the villain into, he does not have a Fortress of Solitude to hold him prisoner, nor does he have the JLA to back him up. He was alone, and when face with the choice, there was no way out. And afterword the strongest person on the planet let out a “primal” scream and cried clutching to Lois. There was no measure of time when the next scene took place, so to say he was just fine is unfair.

Many are calling this a betrayal of the character and that he is too dark and gritty, but has everyone forgotten that in 1980 Christopher Reeves’s Superman turned Zod, Non, and Ursa human and threw them into a bottomless pit in the Fortress of Solitude? While we did not see the bodies, they were left to fall to their deaths.

We have built up Superman and many of our heroes in the past few decades, too much so in fact. Zod’s death could turn into the event that gives Clark the “there is always another way” morals, but we won’t know that until Man of Steel 2.