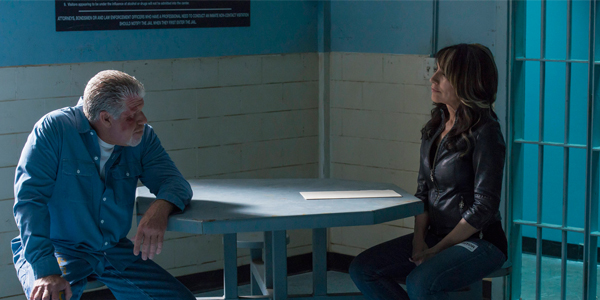 With the weight of the clubs future and the downward spiral of his marriage can Jax carry these burdens without losing himself in the process?

This week opens with Jax moving out and warning Tara not to take the boys anywhere far away. Clay moves back into gen-pop his trial has been moved up and he’s heading to county the next day. He tells the book guy to let Galen know to reach out to Jax and make this thing happen tomorrow.Pope was capital and a guilty verdict could send him anywhere and make all the effort they have been putting into the guns go away

Jax heads to meet up with Nero,and finalize their deal for the Diosa Stockton. The club shows up saying they got a message from Clay. Jax and the club have to head to meet the Irish as soon as possible. Before they leave Jax starts sharing info with the events Tara has initiated explaining to the club she filed for divorce and wants to take custody away from Jax, and move the boys out of Charming. The meeting went off without a hitch with the Irish Jax let’s them know everyone is on board except the Italians Galen offers to go show the Italians the new hardware Jax says no they will handle it But Galen Insists on them taking one of his guys with them Galen then tells Jax and his crew to help break Clay out of prison. Jax says no at first but Galen reminds him they both need this to happen.

Meeting the Italians in a secluded area the Irish show off the new hardware as they are playing around the Chinese show up. Galen and crew try to take them out, forcing the Lin’s crew to run. Galen tells the Italians that this is how serious they are about getting their business. Jax tells the guys to reach out to the Asians to try and stop the bleeding in their relationships in Oakland.

After having no luck finding people to take the club’s spot for the Clay breakout Jax calls the Patterson. and says he will deliver Galen to her in next 48 hours he says he will meet her to give her the details. Meanwhile the Chinese start tailing the guys, a firefight ensues on the highway, and they chase the guys to a shipping yard. Jax is forced to disarm and make a deal with the Chinese to take over guns and deliver Galen to them and takes one of the guys as collateral.

Tara goes to Wendy to confront her for telling Gemma the plan only to find out Wendy is using again. Wendy wants her to come clean and tell them all the truth and try to get clean, but Tara shuts her down sending Wendy into another downward spiral. Tara’s plans are unraveling,  she’s tries to keep it together but ends up taking all her anger out on Juice and his bike, backing up into him and taking off.Tara and Gemma meet face to face by finally and Gemma delivers a very serious message about Tara’s plan and the outcome; Mommy moved away or Mommy passed away. Tara heads to Diosa and catches Jax screwing Colette and punches the madam in the mouth, and runs out pulling a gun on Jax and freaking out, asking what happened to me.

Gemma and Clay meet up one last time before Clay has to go to county and escape. Clay hands her a letter of intent to turn over all assets to her because he wont be able to file divorce on the run, and this insures she gets everything and she is let out of the marriage.

Jax takes the boys from daycare to his home and settles them in back at the house, while Tara makes a last ditch effort to save herself and the boys by agreeing to take the Patterson’s deal. Patterson tells Tara the deal is no longer available leaving her feeling all alone and helpless.

Will Tara do something dangerous? Can Jax keep all the plates spinning and make the deal work? We are down to the final 3 episodes anything can happen.