TBP Pick of the Week- Batman: Rise of Sin Tzu 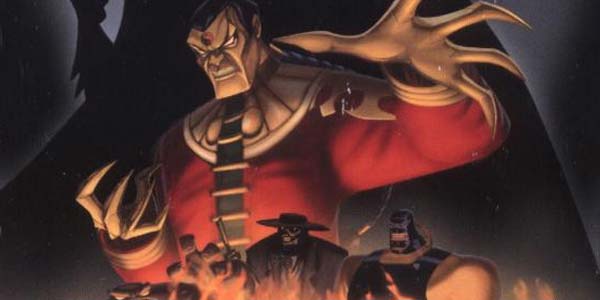 This is a change of pace from the normal TPB that I usually review.

Batman: Rise of Sin Tzu is actually a novel adaptation of the 2003 Ubisoft video game that was on the XBOX (regular non 360) and PS2 formats. The game was set in the Dini-verse style New Batman Adventures and Jim Lee was tapped to make a new villain waaay before he was VP at DC comics.  The original game script was written by Flint Dille and with the help of writer Devin Grayson they took the beat em up game and made a very good novel out of it.

This novel takes Batman on a thrilling and action-packed adventure  that presents a milestone in the legend of the Dark Knight, the introduction of a new and very powerful criminal mastermind who vows death and destruction to Gotham City and her protectors.

For millennia, the immortal Sin Tzu has enslaved kingdoms and reduced nations to wastelands. A master of mystic powers who can control minds, SIn Tzu is all knowing and all powerful. After years of hunting he has found a worthy opponent– Batman. He declares war on Batman by recruiting three of Batman’s dangerous rogues, Bane, Clayface, and Scarecrow. Sin Tzu frees the inmates of Stonegate Prison and Arkham Asylum to give them the numbers they need to cause destruction, death, and anarchy. Only when Batman and his team of Nightwing, Robin, and Batgirl regains control of the streets can the true battle for Gotham begin. Can our Dark Knight win the day against this mystic opponent? Pick up the book and find out!

I remember playing this game as a kid and after reading the book I wanted so badly to find an old XBOX and play it again. You can click the Amazon link on the page to find the novel. It’s 286 pages of awesome!!