Temple of Darkness Sorceress Is A Great Variant 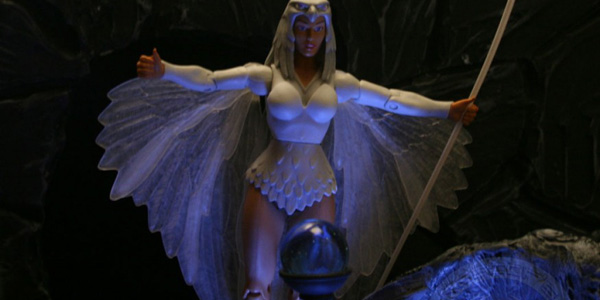 Temple of Darkness Sorceress is Mattel’s Power Con/ New York Comic Con exclusive for 2012, and while she may be seen as a straight-up Sorceress repaint, there are a couple of changes that fortunately (or unfortunately, depending on how much you love the original) improve on the first Sorceress.  She loses her bird form and perch, but she does come with an impressive new podium for King Grayskull’s Orb of Power. This alone moves the toy beyond a mere redeco and definitely merits a purchase. Please read on as to why.

TOD Sorceress is supposed to be decoed in all white, enough white for Frosta, Teela, Zodac, and She-Ra to throw stones at her. It’s nice and bright, and white, heaven forbid. It’s great to see the vendor getting it right like they do here.  This figure is supposed to be the version depicted in the Temple of Darkness mini-comic. This is technically not true, as in that particular issue, Sorceress actually has bare arms– the feathered outfit seems akin to a one-piece bathing suit. While this is the case for purists, take heart that this deco IS accurate to another mini-comic, so all is well on the accuracy front. 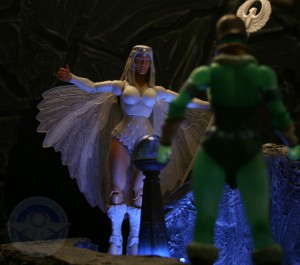 She is the same Sorceress you may already have, but with the old Teela/Evil-Lyn legs. While she does lose her feather boot trim, she does gain her upper thigh movement sorely lacking in the previous version. It shows that since her skirt would have hidden the pins at the hips, these upper legs should have been the ones to use for the first Sorceress. Her accents are pearlescent white, and in the case of her hood, lavender.  Any issues you may have seen with the original Sorceress in the way of paint or hood placement when glued on will be echoed with this one, too. Her wings are translucent, and while she had to utilize the large drums hanging off the back of her shoulders again, the choice of clear looks great. She looks like she JUST received her powers, and her colors and wings were still coming in. It’s a beautiful touch. 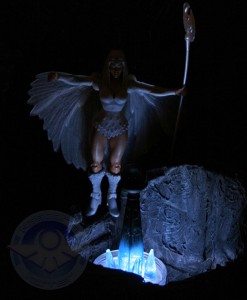 Sorceress includes her wand and a Power Orb display stand. The wand is identical to the first release. The stand is an amazing piece to come with TOD Sorceress– the glyphs and design put into it are gorgeous, and the translucent blue base plastic is a great choice. The construction may be weird on mine, but it doesn’t stand straight up, but it may have been how the stand was glued together before being shoved into a tight bubble. I also needed a hair dryer to bring the top of the distorted stand back to its original shape. If I wanted to be a fanboy about it, I would have preferred she come with her white falcon and perch/armor. For one, the upcoming Castle Grayskull will now have a home for the Orb of Power. Secondly, since King Grayskull come with the Orb, perhaps the base would have been more appropriate for Veena, his Sorceress wife? As it is, I do like the idea of the stand as necessary bait to purchase TOD Sorceress. I am a big fan of plus-ing up older figures with newer ones.

Temple of Darkness Sorceress is an impressive variant and a welcome addition to the line. It will hopefully open the door to other easy comic and Filmation variants will little new tooling as convention exclusives: Filmation Evil Lyn, 200x Evil-Lyn, Filmation Captain Glenn, Comic Trap Jaw, Tri-Klops, or Ram Man, among countless others. She should be on sale in December 2012 on mattycollector.com. I purchased mine at Toy Tokyo in October during NYCC– I had to exchange four of the five TOD Sorceresses I purchased, and they were kind enough to let me choose from the ones on display. With each figure came one of 5 MOTU art prints by Alvin Lee. They are nice extras, but really icing on an impressive cake. 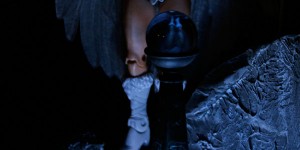 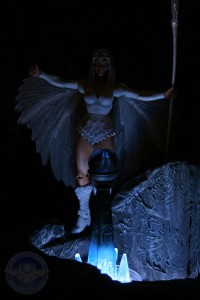 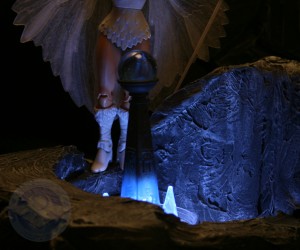 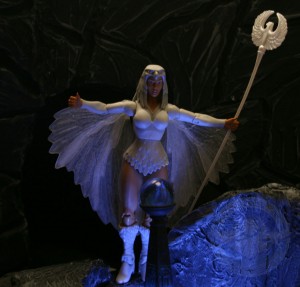 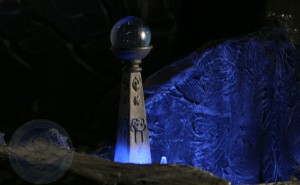 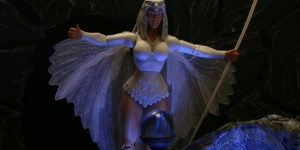