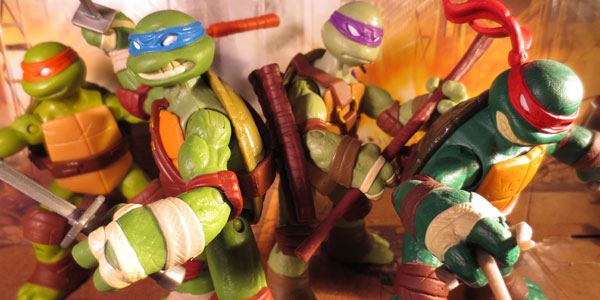 Overall, 2012 was a year filled with surprises for tried and true toy collectors, with some stunning toy lines both new and old coming to the forefront.

2012 was a rollercoaster ride for action figures, with plenty of ups and downs.  We saw major companies scale back in the face of increased production costs and dwindling shelf space, while many smaller, independent companies were more than up to the task of delivering fantastic new products.  Here’s our picks for the ten best lines that made 2012 such an interesting year to be a toy collector: 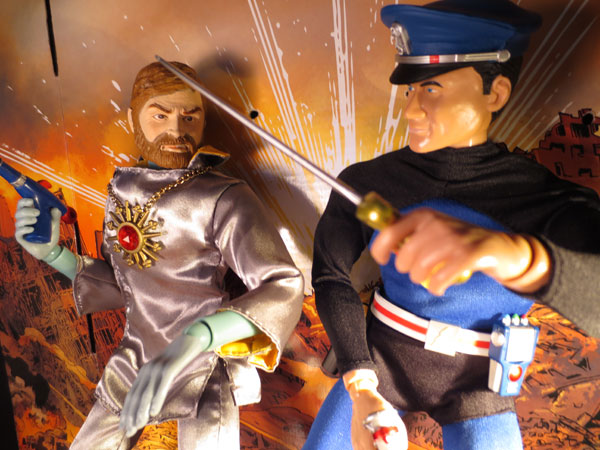 I was late to get into the new Captain Action relaunch, but Round 2 did a great job revitalizing the 60’s franchise with a great mix of retro hipness, excellent new sculpting and engineering, and a LOT of fun.  The classic gimmick, by which Captain Action and his nemesis Dr. Evil can dress up in the costumes and masks of other heroes and villains, made for a very fun new toy line, and a very cool action feature that’s quite addictive to play with.  Captain Action’s relaunch was ambitious, with licensed Marvel costumes, all new figures, and a comprehensive new website– Round 2 really made a splash with this great new line. 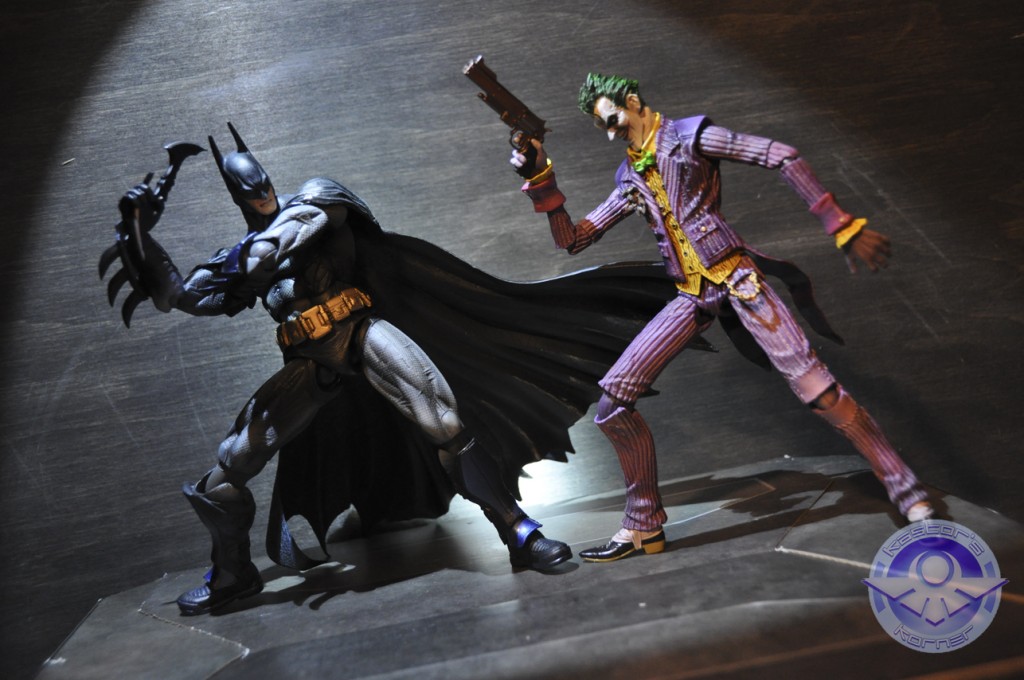 It should come as no surprise that the Square Enix Play Arts Kai series would have a place on this list.  Square added an impressive roster of video game characters and more in 2012– from the excellent Arkham Asylum Batman and Joker, to the long awaited Metal Gear Solid and Mass Effect sub-lines, all of which featured the hyper-articulation, painstaking attention to detail and dynamic design work that made Square Enix such iconic toymakers in the first place.  For me personally, I don’t think anything could top the straight-up cool of their Cowboy Bebop Spike Spiegel figure… but I can’t wait to see them try! 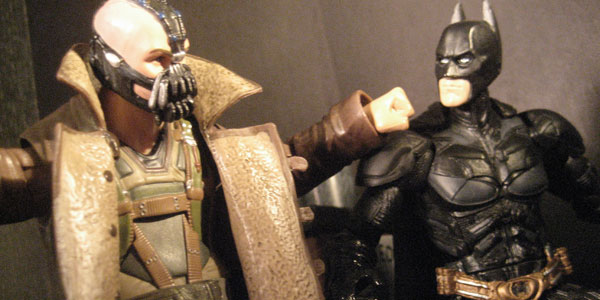 The trend of less movie-based toy lines hitting shelves definitely continued in 2012– despite some wonderfully toy-friendly flicks like John Carter and Dredd— but we did see a few lines based on the Summer’s big blockbusters.  While many of these collections saw reduced articulation and overall quality, Mattel’s Dark Knight Rises Movie Masters held strong.  The Four Horsemen sculpts were as fantastic as predicted, and the figures blended in seamlessly with past Movie Masters to successfully round out the definitive action figure line based on Christopher Nolan’s Batman trilogy.  The “Build A Batsignal” gimmick was icing on the cake, and the final display piece– complete with functional light– is one of the coolest add-on accessories I’ve ever seen. 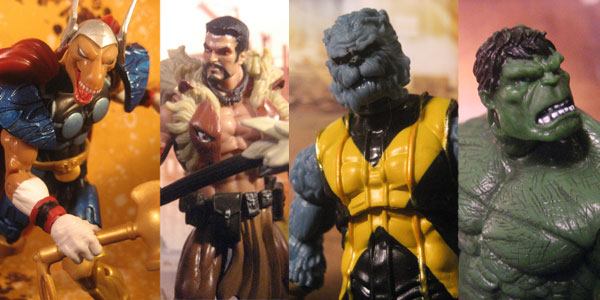 It was a rough year for many of Hasbro’s 3.75″ toy lines, and in many ways Marvel Universe was impacted worse than anything.  While many new figures had been showcased as early as October 2011, we saw a complete dry spell of Marvel Universe for about nine months, before the Kraven/ Beast wave started trickling in to stores, only to remind us how great this line is.  Yes, we only saw three new waves in 2012, but with figures as fantastic as Beta Ray Bill, the new Hulk, Paper Bag Man, She-Hulk, Professor X and Blastaar contained in this sparse selection, Marvel Universe absolutely earns its spot on this list. 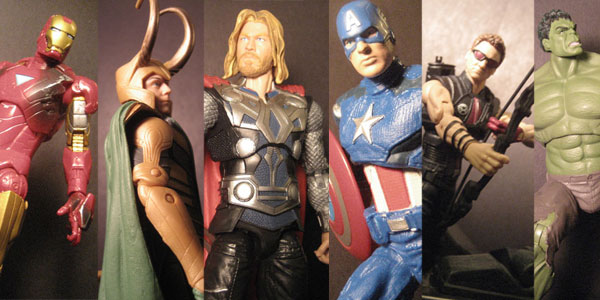 The Avengers was far and away the best super hero movie of 2012, so I guess its only fitting the toy line would follow suit.  Nothing compared to the awesome quality and great looking figures released under the Marvel Legends umbrella this Summer as Wal-Mart exclusives.  While Wal-Mart’s disgustingly horrible distribution, coupled with the organic popularity of the movie being such a smash hit made for tough times tracking these guys down, they were well worth the effort.  The all new sculpts are amazing, packed with movie accurate detail and fantastic actor portraits.  The character selection was solid (we got the whole team minus Black Widow), including what I still think is the best Hulk toy ever released.

NECA had a banner year, with the release of tons of awesome movie and video game based properties.  Their Borderlands, Evil Dead, Django Unchained and Prometheus lines were all stellar, but nothing captured the company’s excellent craftsmanship as well as Rocky.  In three waves, NECA cranked out the entire core cast of the long-running franchise– three eras of the Italian Stallion himself, along with Apollo Creed, Ivan Drago and Clubber Lang, and each figure looked as if they just stepped of the screen.  The variant concept, with different trunk colors and alternate “beat up” heads, was very creative, and lent itself to a wide variety of display options, something the excellent scale and articulation patterns also helped with.

4. Masters of the Universe Classics (Mattel) 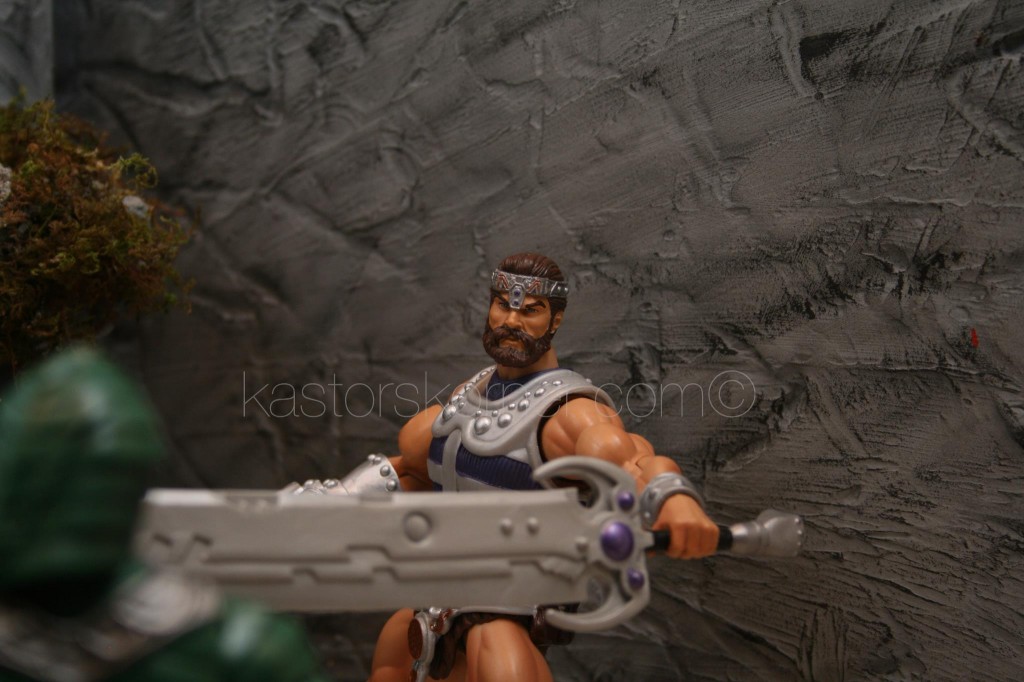 The prices may have gone up for non-subscribers, and some of the character selection was a bit questionable, but 2012 is still the year Mattel delivered amazing updates to classic characters like Fisto and Spikor… plus the very cool 30th Anniversary Collection, which saw new characters such as Draego Man and Castle Grayskullman already earning their permanent shelf space alongside Teela, Man-At-Arms, Hordak and Skeletor.  Overall, this year’s good Masters offerings far outweighed the bad, and they deserve inclusion among the year’s best toy lines… in spite of the Star Sisters.

3. The Hobbit (The Bridge Direct) 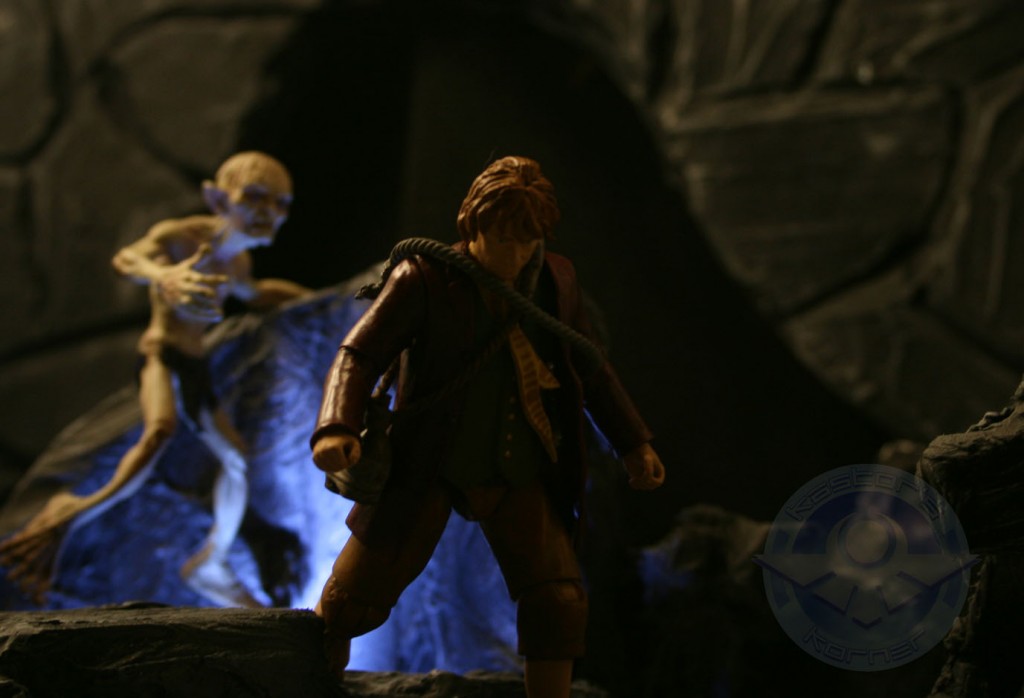 I don’t think any line surprised me more than The Hobbit toys by The Bridge Direct.  It’s been ten years since I retired from collecting Toy Biz’ Lord of the Rings series, but as soon as I checked out the new Hobbit toys, I was instantly transported back to Middle Earth.  The nostalgia of these new toys won me over on giving the movie a shot, and served to remind me just how much I adored Peter Jackson’s cinematic universe of hobbits and elves and dwarves and orcs.  Both the 3.75″ and 6″ Hobbit toys featured some great sculpts and fun sets, with creatures great and small and a real sense of the variety in Tolkien’s universe.  I have to give Bridge Direct special accolades for marrying the scale, sculpting style and articulation of their 6″ line so closely to what Toy biz did for LOTR– these new figures felt like a direct extension of that legendary line, as if they hadn’t been gone for a decade. 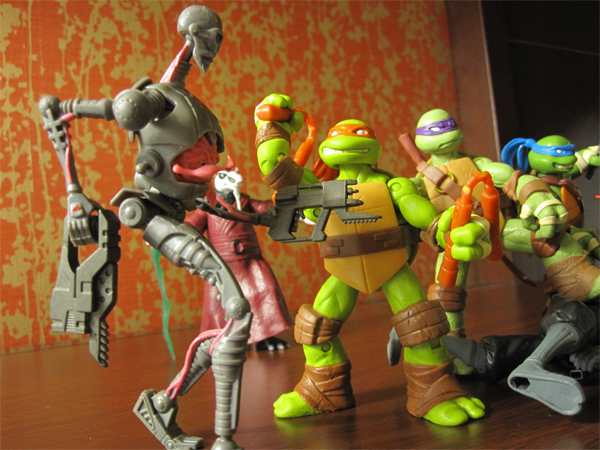 The latest relaunch of Teenage Mutant Ninja Turtles was slow to pick up, but by the Holiday season, TMNT mania had apparently exploded, with cases of figures and vehicles flying off the shelves as soon as they could be restocked.  While the new line (and the new cartoon source material) have their problems, Playmates really knocked it out of the park with their new toy takes on the Turtles themselves– I have never seen Leo, Raph, Don and Mike look as cool, or be as fun to play with as the latest versions.  Loaded with accessories, packed with useful articulation and sporting all-new sculpts– even unique bodies for the four brothers– the new Ninja Turtles were the most fun toys I’ve checked out all year. 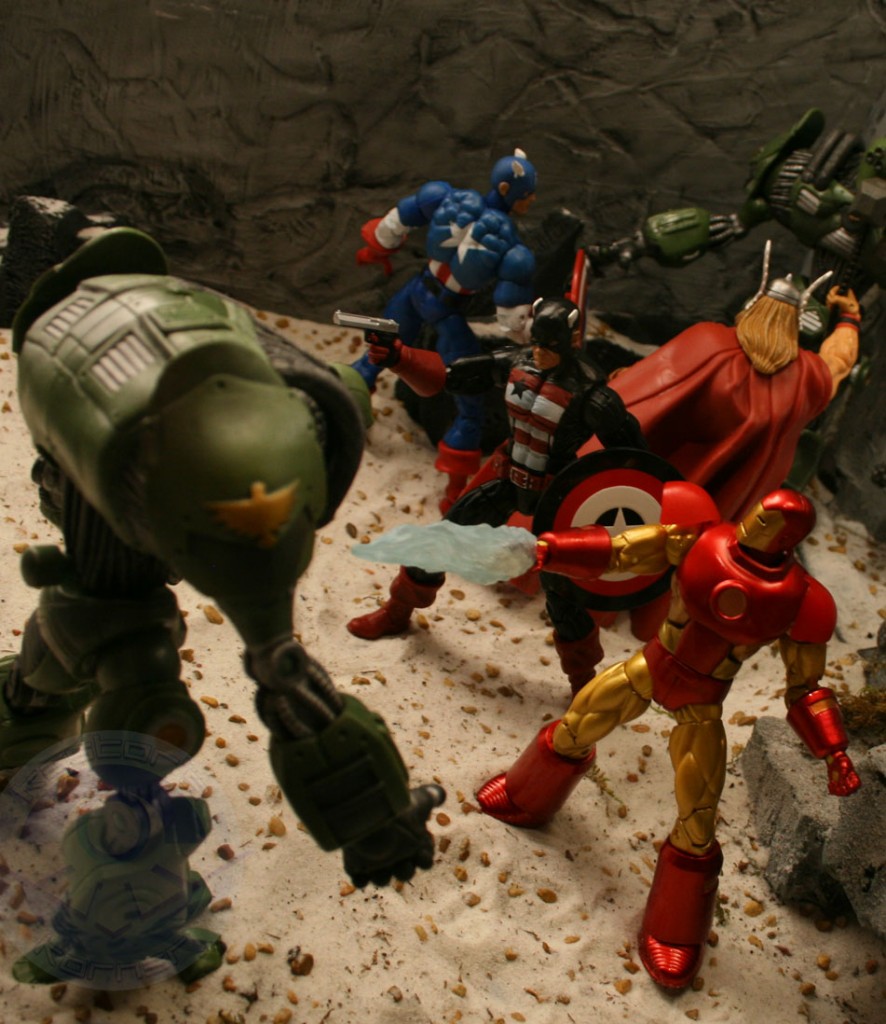 I guess this shouldn’t come as a huge surprise.  Hasbro had been hinting at 2012 as the Return of Marvel Legends for almost two years, but when they finally hit… they were every bit as good as we’d hoped.  We got three new waves of Marvel Legends in the year of the line’s return to the forefront, with awesome modern updates of heavy hitters like Steve Rogers, Bucky Captain America, Thor and Iron Man.  But we also saw the release of more smaller characters like Fantomex, Hope Summers and even half of the Wrecking Crew, as well as a pair of super cool new Build A Figures (Terrax and Arnim Zola) and a stunning Comic Con exclusive X-Force set, with the best Wolverine figure ever released, as well as a preview of 2013’s incredible Archangel.

Aside from great character selection, the new Legends improved on virtually every misstep Hasbro previously took, proving they really listened to the fans.  Gone were the soft sculpts, gummy joints and weird proportions that brought the line to an early close.  Even the new packaging was among the most dynamic and eye-catching of any line at retail.  It’s been a long time coming, but the Return of Marvel Legends was absolutely worth the wait.

A lot of time, 2012 felt kind of like a “down” year for toys, but the lines above were far from the only great toys we saw over the past twelve months.  While these are my picks for the best of the best, honorable mention should also go out to NECA’s Evil Dead and Django Unchained, the Star Wars Vintage Collection, Playmates’ TMNT Classics and Mattel’s DC Club Infinite Earths, which brought the subscription model to their long running DC Universe series.  2012 ended up way rougher on my wallet than I had predicted after Toy Fair, but the amount of cool and diverse new toys in my collection makes that OK with me.