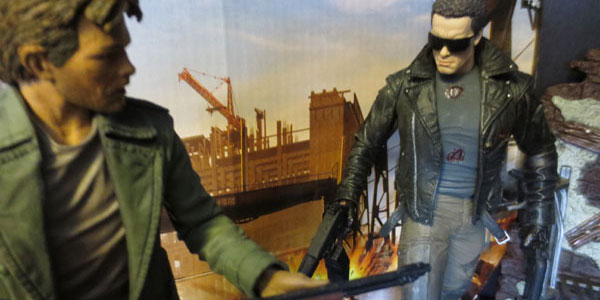 The latest figures in NECA’s Terminator collection are among the best traditional figures we’ve seen from the company.

The most recent figures in NECA’s growing Terminator series bring us three new figures, including the Tanker Truck T-800 and the debut of Human Resistance fighter Kyle Reese into the lineup.  These figures make a nice pair of the core characters from the original film, both in their most iconic on-screen looks.  The new series is rounded out by a liquid nitrogen version of the T-1000 from T2: Judgment Day, but in keeping with the design of these figures, I wanted to keep things as old school as possible. 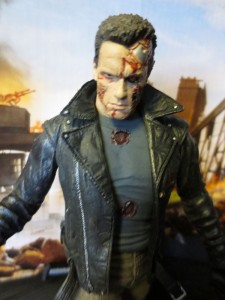 I’m not entirely sure how design choices are handled with NECA’s properties. Across the board, the toymakers are well known for their amazing sculpts, ample accessories and meticulous on-screen details, which these new Terminator figures feature brilliantly.  However, unlike lines like Predator and the upcoming Aliens, the Terminator line still features the traditional articulation we saw on collector-oriented figures by NECA and other companies over the past ten years.  It’s not to say these are statues– each figure still sports over a dozen points of articulation– but with their static legs and limited torso movement, both the T-800 and Reese are fairly set in a single pose.

What’s good is, both poses work brilliantly for the characters.  The new Terminator is presented in a menacing mid-stride, and he can wield either one or both of his guns– a shotgun and an assault rifle. The figure features some great detailing on the battle damaged bullet holes adorning his shirt and leather jacket, and two predictably stunning portraits of Arnold Schwarzenegger. One head features a battle damaged look to match his ripped jacket, revealing the iconic metal skeleton underneath his torn flesh, and the result is just as striking as in the classic movie… I was very pleased to see even small details, like Arnie’s lack of eyebrows, included on the figure.  The second head depicts the robot killer with his signature sunglasses, and looks totally determined in his mission to kill Sarah Connor.  The heads swap on and off at the base oft the next with relative ease, so it’s simple to switch between both looks. 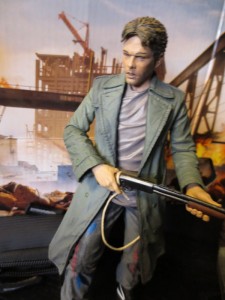 Kyle Reese finally makes his debut in this series, and he doesn’t disappoint.  Reese is featured in his disheveled trench coat and baggy t-shirt and sweats, and the bagginess of his overlays grants him a few more points of articulation, with an effective ab crunch underneath the shirt.  This joint has a great range of motion, but sadly his limited lower half, with the lack of hip movement or anything other than swivel ankles, makes balancing a challenge if you pose him the wrong way.

The portrait of actor Michael Biehn is very good, and it’s making me even more anxious as I await his second NECA figure (Hicks from Aliens), and the figure is appropriately armed with his shotgun and a photo of poor Sarah Connor.  Most of the paint apps are great on both figures, although the paint stains on Reese’s pants tend to be a little over the top on some of the figures.  Like some other paint apps, these appear to be hand-painted as they vary greatly from figure to figure, so with a little bit of looking it should be easy to find one to your liking.

If these Terminator figures had been released a few years ago, they would probably be the finest figures ever released for this property.  It seems unfair to compare them to the even more stellar work NECA has done over the past few years in lines like Predator, but their recent releases– which combine the incredible sculpting that made NECA famous with an increased attention to articulation and engineering– make these Terminator figures feel a little slight, despite their overall quality.  I hope some day NECA gets to go wild with some hyper articulated Terminator figures that match their Predator and Aliens lines, but in the meantime this pair of figures does the job just fine.

Toys R Us is currently having a sale on Terminator Series 3, with each figure temporarily priced at $9.99– at a great price like that, these figures are an even better value.  Click Here to order yours today, or check your local Toys R us store. 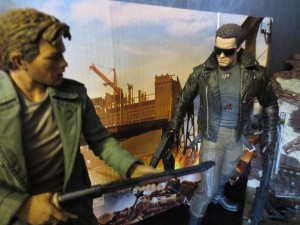 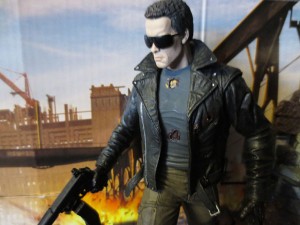 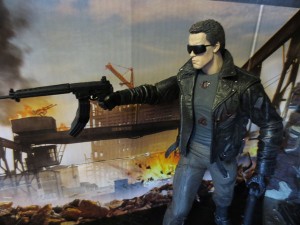 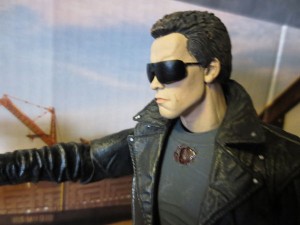 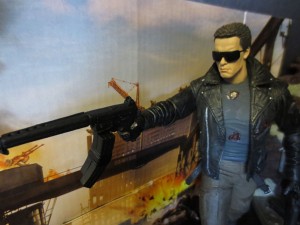 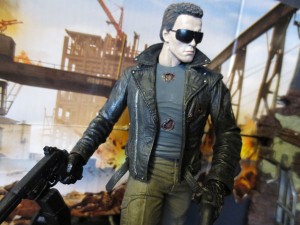 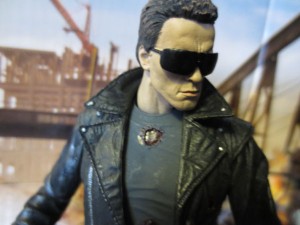 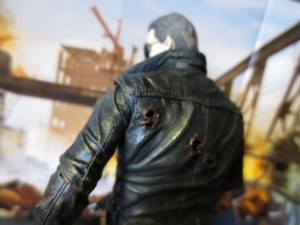 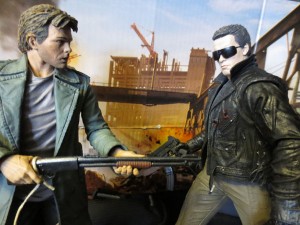 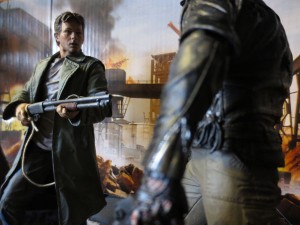 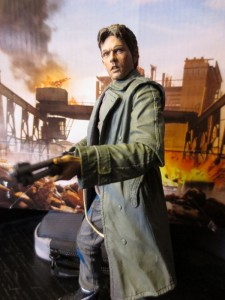 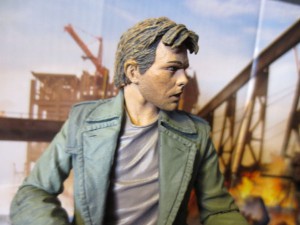 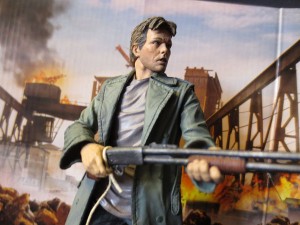 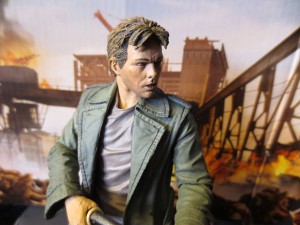 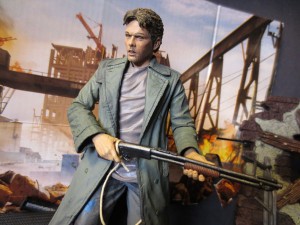 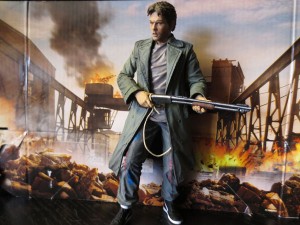 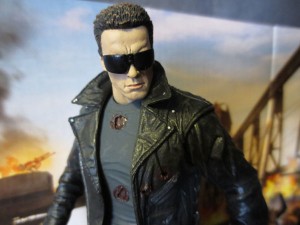 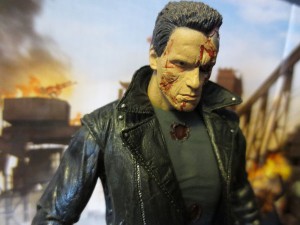 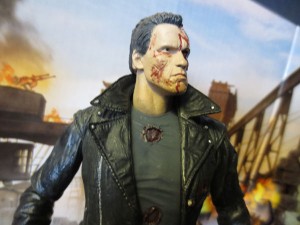 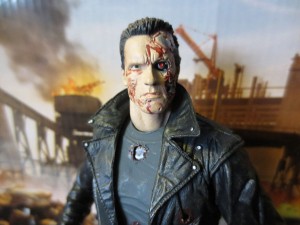 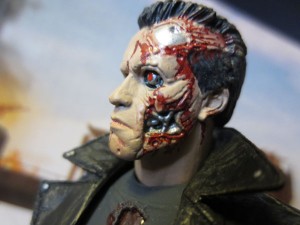 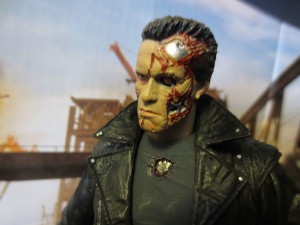 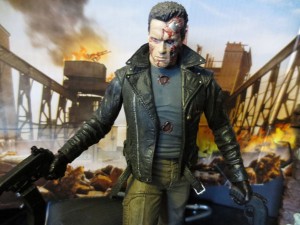