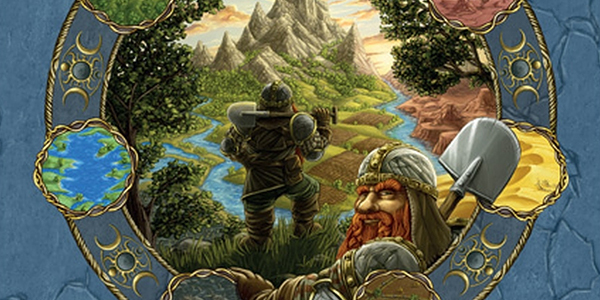 Published domestically by Z-Man Games, Terra Mystica is an utterly fantastic title for the Euro-game enthusiast, managing to deliver a thoroughly unique experience even while relying entirely on familiar mechanics.

The seven types of terrain represented on the game board, divided by a series of rivers, serve as the homelands to fourteen different playable races/factions.  Each of these factions may build structures only on their exclusive terrain, but may pay workers in exchange for spades to transform any land adjacent to a building they’ve already constructed.  This is shown on the game board by placing a round cardboard tile denoting the current terrain type over the targeted hexagonal space.  Players will be able to expand their territory while building their initial dwellings and then upgrading those structures to strongholds, temples, and sanctuaries.  Each of these will impact a player’s economy and earnings differently and earn them different abilities while they continue building an empire.  Additionally, as their influence grows, each player may wish to develop their faction on a spiritual level through devotion to four cults – fire, water, earth, and wind, which are represented by numbered tracks on a separate board. 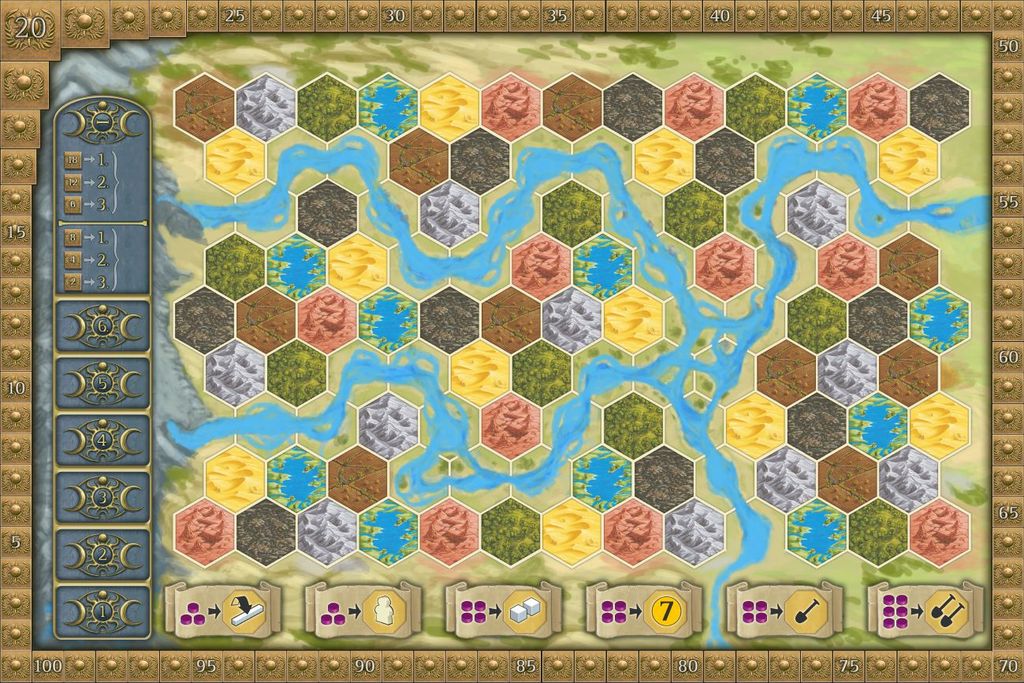 The winner of Terra Mystica is the player who can accrue the largest number of victory points by the end of the game, with many ways to go about reaching this goal.  In addition to specific objectives that are chosen randomly to appear each round which grant bonus points, players also get to strategically choose and pass bonus markers throughout the game with a variety of effects including ways to score.  Once the game is over (play continues for exactly six rounds), achievements are given to the players who have built the longest line of connected structures and who have progressed furthest on the cult tracks, granting them with a large amount of points as well.  Aside from this, many factions have their own special abilities that award victory points under a number of different conditions.  The asymmetrical nature of all the different races is one of the game’s more interesting qualities, as each requires its own strategy and can vary in usefulness depending on what other races are in play.

Each game round begins with an income phase.  The design of all of Terra Mystica’s components is incredibly intuitive and makes it easy to keep track of an otherwise complex affair.  Any revealed spaces on a player’s faction sheet or bonus tile that depicts an outstretched hand under an item advises that, at the beginning of each round, the player will collect those items. These could be, for example, a number of workers (wood cubes), gold (cardboard tokens), or power (purple discs).  I say “revealed spaces” because, as you remove buildings from your faction sheet to build them on the main board, the income bonus underneath them becomes visible and available for future rounds.  Fans of Eclipse will immediately feel at home with this mechanic, although it’s far less oppressive in that there is no balancing of an economy with a chance for bankruptcy – players are simply able to spend only what they currently have in their possession. 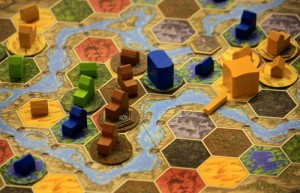 Once each player takes his or her earnings, they may take turns performing eight possible actions as few or as many times as they wish as long as they are able to afford to do so.  All actions cost money, workers, priests or a combination of those and the cost requirements can be different amongst races.  Using a “transform & build” action will allow a player to use x amount of workers to obtain spades.  Using the circular terrain key on their faction mat, players can determine how many spades would be required to transform each kind of territory to their homeland, up to a maximum of three spades.  If you were able to fully transform the land into the required territory and you can afford the materials, you may then build a dwelling on the land. Players may only transform land that is adjacent to one of their structures.

By using an action to upgrade your shipping ability, a player may consider a space to be adjacent even if it is across a river. Terraforming skills may also be upgraded as an action to allow players to spend fewer workers on each spade.  Both upgrades have their own associated costs.  Using an action to upgrade existing buildings is an important part of the game and the key to a healthy income.  You may upgrade a dwelling to a trading house, which can then be upgraded to a stronghold or to a temple. One temple can in turn be upgraded to a sanctuary and each grants bonuses such as priests and favor tiles.  The former can be sent to advance your footing on cult tracks or used to fund actions, while the latter grant powerful bonuses – dedicating a priest in this way is also an action.  There are also power actions on the game board and on the special cards players draw that allow only one person access to the ability in a given round.  These may grant additional spades and workers, advance you on a cult track, or give the ability to build bridges (more on why bridges may be important in a bit) in exchange for power.  Power can be gained as income but may also be gained by neighboring structures.  Building next to another faction is a double-edged sword for this reason.  On one hand, it may make expanding your territory more difficult, but on the other, you have the option to gain power (in exchange for victory points) when another faction erects a structure that is directly adjacent to one of yours.  Not only that, but trading houses are cheaper to build if set up next to an opponent’s structures.  Lastly, passing is considered an action and the first player to do so in a round becomes the starting player in the following round. 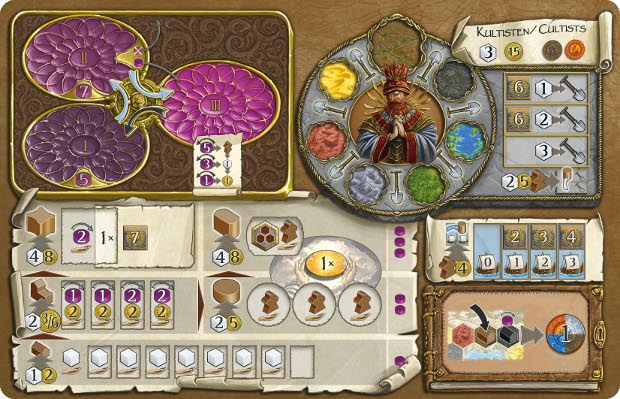 Once a player has built enough structures, a city can be formed.  While there are exceptions, a city normally consists of at least four structures with a total power value (as depicted on the faction sheets) of at least seven.  Forming cities not only grants victory points and one of five other bonuses, it also grants a key to the top tier of one cult track.

There are plenty of other subtleties to learn, but that covers the basics, and luckily the rule book is comprehensive and is laid out extremely well.  At first glance, the sheer amount of information presented on the faction sheets is almost overwhelming and looks incredibly complex, but once you familiarize yourself with the game, you realize just how intuitive and well-designed it is.  Terra Mystica is a joy to play and, even with its random elements, allows no room for luck – this is a deep strategy game through and through which will take thought and skill to come out victorious.  And while an argument can be made that some factions are slightly more powerful than others, everyone does have a fair shake and the games I have played thus far have been rather close.

Component-wise, the publishers went all-out.  The boards, cardboard cards, and chits are all gorgeous and even the wooden bits look great.  Everything from the vibrant color palette to the wonderfully illustrated factions and terrain looks incredibly impressive and helps immerse you in the world of Terra Mystica, even while the theme itself isn’t terribly well-implemented.  Between its wonderful aesthetic and brain-burning, fun & interesting mechanics, there is just a ton of value here for the money.  It’s the type of game that, upon completing, you instantly look forward to playing again, to try out new strategies or experiment with different factions.  Without a doubt, it’s one of the best tabletop games to hit stores this year.