The Amazing Spider-Man 2 Pretty Much Sucks 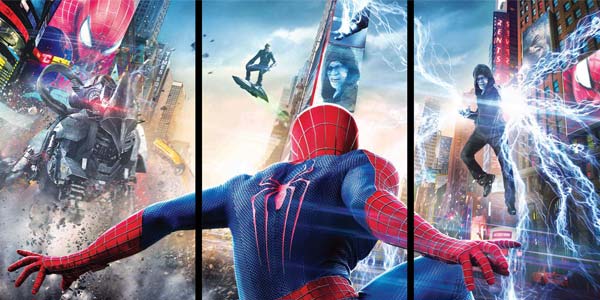 The latest Spidey sequel is a shapeless, frustrating and mostly un-enjoyable mess.

There is a scene late in The Amazing Spider-Man 2 in which Aunt May explains to our hero how to cope with grief, by putting things in a box and finding a better place for them.  It seems that this life lesson was not lost on the folks responsible for Spider-Man’s latest big screen outing, because what they present here really is just a random pile of stuff jumbled together.  Some of it is good, lots of it is bad, but this movie is a mess, that much is clear, and it did not leave me with much confidence in Sony’s plans to expand their Spidey franchise into its own Marvel-esque universe.

Like I said, not everything in this random slattering of visual effects, teen melodrama, super heroics and attempts at pathos is bad.  Andrew Garfield and Emma Stone once again bring their A-game as Peter Parker and his would-be (should-be?) girlfriend Gwen Stacy.  The chemistry between these two is wonderful, and if there is one thing that really works in the movie– and one through line that feels complete from a storytelling standpoint– it is these two kids and their complicated relationship.

Stone in particular stands out, as Gwen becomes more than just a damsel in distress.  Throughout the movie, she is met with an overly protective attitude from Peter, along with the message that “he knows best.”  Gwen won’t stand for that, and Stone makes her frustration feel real, to the point that it makes sense that Gwen continuously places herself directly in the middle of the super heroic action whenever she can.

While comic readers are likely to roll their eyes at some of the clunky, heavy handed foreshadowing with her character, there’s no denying the energy and life Stone brings to this girl.  It’s enough to make her cliche “will she follow her heart or follow her dreams” story arc compelling, and Stone sells the conflict of being uncertain about what the “right” thing to do is.

Garfield’s Peter is also great, with his own parallel conflict after graduating high school.  His back-and-forth with Gwen could easily have fallen into Twilight level melodrama, but the two leads’ natural charisma helps keep things engaging.  Both characters have a stake in their relationship, but also a very different point of view on what they are for each other.  And each of these perspectives stays true to the character, making it one of the best relationships we’ve seen in a comic book movie.

Of course, Peter is only half of Garfield’s role, and while his work as Peter is good, his Spider-Man is the best realization of the character we’ve ever seen on film.  Spidey swings from buildings, focuses much of his time on protecting innocents, and is just as deft with his quips and one-liners as he is with his fists.  There’s a simple joy to seeing the exact Spider-Man I have read in the comics come to life like never before– right down to the absolutely perfect new costume– and a scene like the opener where Spidey first meets the man who will be Rhino is a blast.

But two great leads and some geeky wish fulfillment moments with Spider-Man is all movie has going for it.  Unless this is the super hero equivalent of Before Sunrise (it’s not), two great leads aren’t enough to save the rest of the movie from itself.  While I was okay with Paul Giamatti going really over the top with his Rhino, the more important villains such as Jamie Foxx’s Electro and Dane DeHaan’s Harry Osborne are just as broad, over exaggerated and campy in the worst ways possible.

The two villains follow a similar path, starting as (semi) sympathetic characters before going through a metamorphosis (and yes, there’s a zany German doctor named Kafka in the movie, in case you didn’t get the reference), and ultimately blaming Spider-Man for their woes.  The movie would have us think this blame is unfounded, and while it mostly is, Spider-Man is very quick to abandon any empathy for either villain once they become dangerous.  It adds nothing to the bad guys’ pathos– seriously, Electro/ Max Dillon is so one-note I almost felt bad for Foxx, who seems to think he’s playing an actual character here– and it kind of makes Spidey seem like a dick.

Electro is the worst offender, with his only purpose in the whole movie being to extend the run time and provide set up fr a few big, CGI action set pieces.  It’s a waste of a good character, a good actor, and a good concept, because if there was some meat to his fanboy-turned-villain arc, he could have been something special.  Instead his tragic origin and humanity is completely ignored the instant after his first fight with Spidey, never to return.

DeHaan’s Harry isn’t terrible, but his Green Goblin sure is.  The character is tied intrinsically to the horrible sub plot that Peter was predestined to become Spider-Man, robbing the hero of the everyman quality that defined him.  And while Harry could have been a character worth following through the franchise, he’s rushed into his role as the Goblin way too quickly in the third act, and this iteration of Spidey’s number one villain might be the worst we’ve ever seen.

Thankfully, we don’t get much of him, as his one fight against our hero is basically tacked on after the big Electro battle, and serves mostly to hit a very spoilery story beat from the Spider-Man comics (I’ll discuss this at the end).  This whole two-tiered final battle brings up another major strike against the movie– the effects work really hasn’t improved since the first one.

Director Marc Webb has a decent eye for visuals, but I just cannot get into his stylistic choices for these movies.  While Spidey’s building-swinging through the city is much more well executed this time around, the awful POV shots from the first movie have now been replaced by an absurd amount of bullet time sequences that made me think the same thing as last time– I’m watching a video game, not a movie.  The final showdown with Electro is the worst offender, as it becomes painfully obvious that nothing on screen is practical… so we really are literally just watching a video game.

I could get over some crappy effects work, or even a rushed villain story (especially when the Peter-Gwen stuff is so strong… that SHOULD be the main focus), but the whole script is bad.  Alex Kurtzman and Roberto Orci– responsible for the Transformers and Star Trek movies– have outdone themselves this time, with line after line of clunky dialogue, characters changing motivation and attitudes for no reason, and no attempt to streamline the story as it toggles frantically from Peter and Gwen to Spidey to Peter’s parents to the lame bad guys.  If there’s one thing to blame the failing of this movie on, it’s the script.  Webb and Garfield and Stone do what they can with the (very) little they have to work with… but it’s not enough to save this movie.

SPOILERS AHEAD in Inviso Text… Don’t highlight and read, unless you’re okay knowing how the movie ends.

Speaking of saving, I will give the story one thing– they handled the death of Gwen Stacy much better than I thought they would.  As we all assumed, the Goblin throws her, and Peter is too late to save her. By the time he catches her in his webbing, she is falling too fast and her neck snaps.  When Peter finds her, she’s already gone, which was honestly the only surprise of the movie’s final act to me– with all the predictable, eye rolling moments prior to this, I assumed Gwen would fade away slowly in Peter’s arms, after they say their last goodbyes.  For what it’s worth, the filmmakers had the guts to be a little more realistic and a little less contrived, if only for that one scene, so… credit where credit’s due.

However, while this scene was handled well, it seems to hurt the viability of expanding the Spider-Man cinematic universe.  We know there’s a Sinister Six movie in the works, and it’s looking very obvious it will be lead by Harry.  But after he murders our hero’s girlfriend in cold blood in this movie… is anyone really going to want to see him as the lead in his own film?