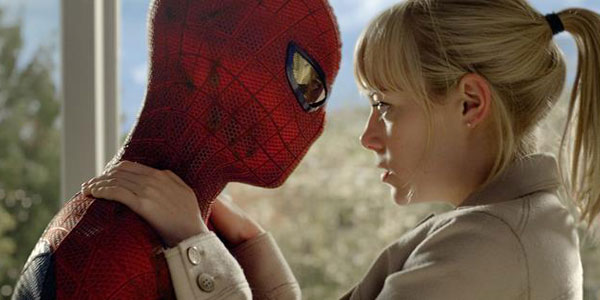 Sony’s reboot of Spider-Man is a solid, but nowhere near perfect new start for the wall crawler that brings us the best cinematic version of Peter Parker and sets the up the potential for some great new big-screen adventures.

The Amazing Spider-Man is a movie charged with the unpleasant task of rehashing the origin of Spider-Man for the second time in little more than a decade, but it faces this problem head-on.  Unlike Sam Raimi’s version, this new movie adapts Spidey’s classic beginning rather than translate it and the result is a fresh, fairly new take on an overly familiar story.

What really sells this new version is the well-crafted characters, and the excellent cast is lead by Andrew Garfield, playing a very different Peter Parker. Gone are the straight-up nerd of the comics, or the sad-eyed sappiness of Tobey Maguire’s portrayal– Garfield’s Peter is still an outcast for sure, but he’s got a punky, rebellious streak that was refreshing for the character. The idea that nerds are cool in today’s young society, skewered brilliantly in 21 Jump Street, helps make the new Peter a unique rendition of the boy trying to find out who he is, and rather than bookish nerdism, Garfield’s Parker is more of a tech geek, a mechanic who’d rather rebuild an appliance than a muscle car.

There’s a lot to Peter, who’s dealing with abandonment issues due to his parents leaving him in the safe keeping of Uncle Ben and Aunt May when a mysterious outside agency threatens their family, but rather than get all emo and mopey about it, the gawky teenager instead busies himself with skateboarding, taking photos like a fly on the wall, and occasionally getting into fights at school… in other words, being a teenager.

This take on Peter is also very headstrong, and prone to obsession, both over finding out what happened to his parents (which leads him to both meet Rhys Ifans’ Dr. Curt Conners, and receive the fateful spider bite that mutates him) and eventually hunting down his Uncle Ben’s killer in his first outings as a masked vigilante.  A big part of Spider-Man’s origin is truly understanding the meaning in Ben’s words “with great power come great responsibility” (a phrase never uttered in this movie, by the way), and I absolutely love that Peter develops what will be his crime-fighting alter ego not as a means to help others, but on a mission of revenge to find Ben’s assailant.  It’s a cool spin that Spidey goes so far as to become a pop culture icon in NYC, covered by YouTube videos and gossip on the streets, before his actions become anything near heroic.

These early missions also bring Peter in opposition with Denis Leary’s well-realized Captain Stacy, who assumes the J. Jonah Jameson role as the anti-Spider-Man crusader, and his denial of Spider-Man’s heroics as he explains the way police surveillance actually works is a lesson for the young hero every bit as important as the wisdom Ben imparts. Peter’s clashing with Captain Stacy also complicates matters with his would-be girlfriend Gwen Stacy (the absolutely charming Emma Stone), who just happens to be the Captain’s daughter.  Of course, Peter makes things even more complicated by revealing his secret identity to her as fast as possible. It may sound like sloppy writing, but when keeping in mind that both Parker and Gwen are teenagers, the lack of maturity they display feels organic as opposed to lazy. On top of that, Garfield and Stone have an incredible and natural chemistry together, which brings a spark of life to even their most taxing dialogue.

A lot of this review has focused more on Peter’s life as opposed to Spider-Man’s activity, and there’s two reasons for that… first, to be perfectly honest the Peter stuff is far more compelling and entertaining, especially with a powerhouse like Garfield commanding such a presence.  And second, while there’s still a healthy chunk of big blockbuster action beats, a lot of the movie really does keep the focus on Peter and not his alter ego.

This isn’t meant to say the Spider-Man stuff is bad, it just feels a little rote.  The new costume looks good, and Marc Webb’s camera does quite a few inventive things far more imaginative than anything on display in Raimi’s movies.  Even when they don’t entirely work (the POV web-slinging shots still look like a video game to me), I have to give credit to some of the more interesting visual ideas in the direction.  That being said, the action sequences are virtually 100% CGI and it really shows– I’d much rather have seen more practical effects especially involving Curt Conners’ Lizard, who looks nice and creepy in his half-mutated state but nowhere near as scary when he’s an obviously CGI monster.

The re-introduction of Peter and his world, and the methodical evolution of Spider-Man into a hero are well done, but the movie suffers from a very by-the-book third act which almost betrays all the good that preceded it, with virtually every scene being recycled from a previous comic book movie. NYC residents band together to help an ailing Spidey? That was done brilliantly in Spider-Man 2.  The villain wants to mutate everyone in the city?  Try the first X-Men.  There’s more rehashed spoilery bits as well, but I think you get the idea without me giving them away here.

A lot of people are knocking this movie on the grounds that it’s too early to reboot the franchise, but while I adore Sam Raimi, he made so many missteps even during the good part of his run that a do-over seems like the only way they can really go forward.  The new movie seems more clearly cognizant that it will be an ongoing series, so they’re willing to take their time by not cramming Peter’s entire High School career, or the Daily Bugle, or Mary Jane Watson, or even Norman Osborne into a single film.  The result is something that seems much more sustainable as a franchise– the biggest hook of Spider-Man was that he’s just a kid, and so many of his best comic book stories took place before Peter even made it to college.  To take that out of the equation in 20 minutes never sat right in Raimi’s movies; nor did Peter’s constant need to remove his mask with no repercussions (an issue with at least a hint of impact on display here), and the reboot lets them fix those mistakes and more.

Overall, The Amazing Spider-Man isn’t a truly great movie, but it’s a pretty good one, and it pretty much works.  The best part about this movie for me is that with an excellent Peter Parker in place and the baggage of the previous films and the origin story cast to the wayside, we’ve been set up for possibly the first truly amazing Spider-Man movie up next.