The Avengers Movie Blasts Into Action at NYCC 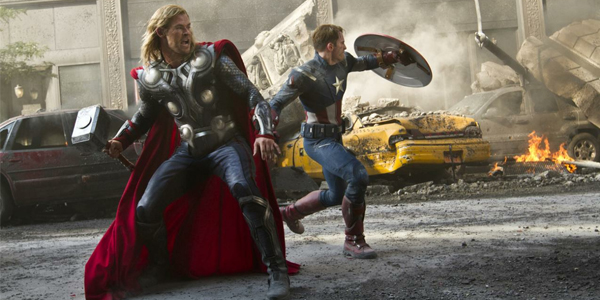 There were a lot of major panels at New York Comic Con, but the biggest by far was the Marvel Sudios panel for The Avengers! The movie, coming to theaters next Summer, is the culmination of six years of films, bringing together such comic book (and now cinematic) heroes such as Iron-Man, Captain America, The Hulk and Thor along with newcomers such as Hawkeye and Black Widow in the ultimate comic book team-up movie. The panel saw the first big-screen presentation of the brand new Avengers trailer, as well as an exclusive first look at a scene from the film… and featured much of the cast of the super hero movie live to answer questions from fans!

Kevin Feige, the man behind all the great Marvel films came out first, and shared the brand new Avengers trailer with the packed crowd. When I first saw the trailer online last week, it left me a little cold… it was good, but not great. But seeing it on the big screen, in a room full of die-hard fans really made it come to life– each action beat was thrilling and each piece of great banter between the heroes really popped. It ramped the experience up, and left me dying to see more as soon as possible.

Fortunately, they came prepared and screened an all-new scene from the film as well, which made its world debut at NYCC! In the scene, Natasha Romanov (Scarlet Johansson) tracks down the fugitive scientist, and Hulk alter-ego Bruce Banner in India. The two share a great scene in which Romanov, AKA Black Widow, tries to recruit Banner to join the team to help them, while trying to keep Banner calm enough that he doesn’t “hulk out” and destroy the building– and her. The dialogue between the two was sharp and very well done, with some great beats that pay off in the end. Just from this one scene it’s clear that The Avengers is going to be a BIG movie, with a much larger scope than earlier Marvel movies, which is great since I still feel the one thing lacking in the Iron-Man movies is scope; it worked well to keep the first one a small story, but the sequel never seemed to get as big as it should have been. This time out there’s a real global sense to the adventure this time out, and to the danger our heroes face.

But the panel wasn’t all about screening goodies for the lucky fans in attendance– much of the cast was also in attendance. Appearing live for the panel were Chris Evans (Captain America), Tom Hiddleston (Loki), Colbie Smulders (Maria Hill), Clark Gregg (Agent Coulson) and Mark Ruffalo (The Hulk). Chris Evans started things off, saying it was great to be able to “share the load” in this ensemble movie, as opposed to being the only hero from Captain America: The First Avenger. It’s always important for an ensemble to get along, but Evans said the whole cast got along very well during filming, and it was clear from the panel they all had great chemistry. While the schedules of so many top actors don’t always coincide, they did film some of the movie all together, and even went out on the town as a group when shooting wrapped– Clark Gregg recalled his favorite text message of all time, sent by Evans after filming one night. Planning to hit the town for the night, Evans sent a text to the whole team that simply said “Assemble,” the famous catch phrase of the comic book Avengers.

It wasn’t all just fun, though– Evans was quick to point out he loved they could all “share the misery” of the elaborate super hero costumes they all wore, which took hours to put on and take off each day. Tom Hiddleston, who plays the villainous Loki whole-heartedly agreed with this, with a costume featuring an elaborate horned helmet and a suit of armor and leather that was as heavy as it was complicated to assemble. Despite this, Hiddleston loved the role, and clearly has a great understanding of his nefarious character– as the actor described, the Thor movie saw Loki as confused about who he was and his place in the universe, but by the end of that film he was much more clear on who he was and where he belonged… and unfortunately for the rest of us, that place was as a very bad guy, a point which Hiddleston found thrilling. That’s not to say Loki has it all figured out– Hiddleston stated “Everyone has daddy issues. [Loki’s] got some brother issues, as well.” With the Thor movie essentially being an origin story for not only the God of Thunder but also his brother, Hiddleston plans to continue Loki’s evolution from confused trickster to sinister villain, this time squaring off as the main villain against the entire team of heroes. The new Loki, now fully possessed and mean also gets to flex his shape-shifting muscles, adapting his fighting style to counter each of the heroes’ abilities, from Captain America to Iron-Man… and of course a rematch against his brother Thor!

Mark Ruffalo was clearly very geeked out to be a newcomer to the Marvel film series, and very enthusiastic about his performance as both Dr. Banner and his monstrous alter-ego, The Hulk. Thanks to modern motion capture effects, Ruffalo is actually the first actor ever who will portray both Bruce Banner and the giant green creature… and apparently he looked hilarious on set, in his sensor-covered bodysuit in the background of the rest of the heroes in their full costumes. The new Banner will borrow from past performers in the role, from Bill Bixby, who appeared on the 70’s TV show, to Eric Bana and more recently Ruffalo’s friend Edward Norton. Ruffalo and Norton joked about the role of The Hulk, saying it’s “[our] generation’s Hamlet– we all get a chance at the part.” Despite following what the past performers brought to the role, Ruffalo said his Banner is a bit more insecure and skittish– it’s been two years since he “Hulked out” when he’s introduced– and he feels he was able to add his own angle to the character… or as he put it, he’s “Ruffalized” the character.

Clark Gregg and Colby Smoulder both play agents of SHIELD, the secret government organization which brings the heroes together, and both were very excited to be part of a project of this magnitude. The always-amusing Gregg has been part of the Marvel movie franchise since the first Iron-Man movie, and never thought a single line as a minor player in that film would evolve into a main character appearing in everything from Iron-Man 2 to Thor, and now The Avengers. Gregg’s Agent Coulson has served as a great way to connect all the heroes’ individual stories, planting them squarely in the same universe has essentially been the foundation of The Avengers, which gives some truth to Gregg’s quip that he’s “the hero you don’t see coming.” Colby is a newcomer to the Marvel series, playing Maria Hill, another SHIELD agent from the comics. The How I Met Your Mother actress said her physically demanding role was great, and she always wanted to work on a project with director Joss Whedon. She and Gregg both recollected the feeling of awe they felt the first time the doors of the giant SHIELD Heli-Carrier (yes, we’re going to see the Helicarrier!) opened to reveal the fully assembled Avengers, and the excitement of this presentation gave the same feeling to the entire packed theater at the convention.