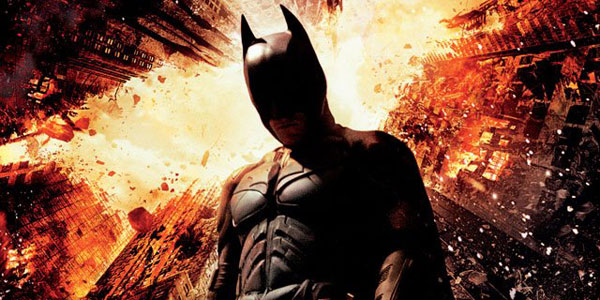 Chris Nolan has completed his Batman trilogy, but does his swan song end on a high note?  Is it even a good movie?

I wanted to wait a few days to publish my review of The Dark Knight Rises because it’s real tough to talk about this movie without going into spoiler territory, but even so, be warned– there will be some spoilery stuff in the second half of this review.

One thing I can say is Nolan went large scale on his final Bat-movie. The Dark Knight Rises has more effects and large-scale set pieces than Batman Begins and The Dark Knight combined, and there’s plenty of parts of the new movie which are stunning to see on screen.  As could be expected from a cast as great as we have here, there are some excellent performances as well.  These things should tie together nicely to form a solid cinematic experience, but for some reason The Dark Knight Rises just didn’t feel complete to me.  Its almost three hour run time belies a weird sense of rushed pacing, especially in the second act, and there’s more than a few times when even a director as skilled as Christopher Nolan just can’t handle the bloat of his own film.

We’ll start with what works, which more than anything is the cast.  Anne Hathaway nails it as Catwoman, and her flirtation with Bruce Wayne (both in and out of costume) are electrifying– the chemistry these two share on screen is fantastic, and we are given just enough back story and character moments with Selina Kyle to really understand who she is.  Hathaway’s performance comes the closest to rivaling Heath Ledger’s Joker, with a similar air of energy breaking up this still overly-dour romp.  The problem is, the script gives Selina practically nothing to do, as she chases a MacGuffin that will erase her identity and give her a much-coveted “clean start,” and mostly hint at where her eventual allegiance will lie. It’s a sad betrayal of an actress really going for it in this role– despite how entertaining she is on screen, Selina can basically be wiped from the movie altogether and it would impact virtually nothing.

Equally great and slightly more integral to the plot is Joseph Gordon Levitt as GCPD rookie John Blake. The young beat cop proves his chops early in the film and quickly enters Bruce’s inner Bat-family circle.  Blake has an interesting role in the film, as much of the rise of Bane and the ensuing chaos is seen from his vantage point, and he has the most complete and satisfying arc of any character, although I’ll talk about that later in the spoilers section.

The most disputed role in the film will certainly be Bane, but I actually really liked Nolan’s take on the man who broke the Bat.  Tom Hardy plays Bane as broad as Ledger’s Joker, but in an entirely different direction.  The actor gained 30 pounds of muscle mass for the role and it shows– Bane is a hulking beast of a man, and Hardy does wonders conveying the vicious intelligence of Bane using mostly his eyes, as the rest of his face is encompassed by the (still silly looking) mask.  Bane is kind of a blank slate character to me; part of the 90’s trend of new “ultimate” villains that would lead to the replacement of DC’s core heroes during their “kill crazy” phase, Bane was cool enough but far from the most sacred of cows in Batman’s rogues gallery. Nolan and Hardy play Bane more like a Bond bad guy than a super villain, clearly their intention right from Bane’s heavily Bond-inspired introduction in the midst of an airplane attack.  Yes, Bane’s voice is incredibly silly, but for some reason it didn’t take away from him as a very dangerous threat– something else certainly did, but again, I’ll approach that in the spoilers.

The rest of the cast is mostly returning support, and everyone from Gary Oldman to Morgan Freeman to Michael Caine again prove their pedigree in this series, although all are made weirdly inconsequential to the story being told.  This is especially bad for Caine’s Alfred, who basically just leaves the damn movie toward the end of the first act, in a move that’s a far cry from the characterization of the ever-loyal butler of the comics.

I think a lot of the sidelining going on with other characters is to make way for Christian Bale’s Bruce Wayne, who really is the center of this movie. Batman Begins was the first Batman movie to really shine the spotlight on the Dark Knight and his alter ego, instead of having him play straight man to a more compelling villain. Nolan’s first sequel– still the best Batman movie by far– backed off on that notion, instead opting for a movie with basically three protagonists… is The Dark Knight a Batman movie? Or is it a grand tragedy of the rise and fall of Harvey Dent? Or is it an ode to chaos starring The Joker? It was a cool concept that the same movie could feature any one of the three characters as the “hero,” but for this final chapter there’s no getting around it– this is Bruce’s movie.

What’s good about this is, Bale as Bruce Wayne has never been better. He gets to explore the human side of the character a lot more this time out, and while I could have done without two similar scenes of a sidelined, broken Bruce whipping himself back into fighting shape, his journey is fairly well-handled until his cheap payoff in the film’s final moments.  I’m also glad we delve more into Bruce than Batman, because while the suit still looks good– and the additions of elbow and knee braces to aide Bruce’s failing joints are a wonderful nuance that did a perfect job of marrying the comic book hero to Nolan’s obsessive realism– the voice is as goofy as ever. With both the hero and villain sounding so unintentionally silly, I was almost rooting for the film to end with a debate between them, while the city of Gotham literally dies laughing at how absurd they both sound.

So with a few caveats based on weird decisions, the cast really does shine. How’s the story?  It’s okay, but not without some hefty problems. Taking cues from Knightfall and No Man’s Land, the movie picks up eight years after Bruce hung up the cape and cowl and became a recluse in the wake of Harvey Dent’s death. Gotham has since cleaned up its act due to some vague legislation in memory of Dent, so it seems as though the Batman is no longer needed.  Bruce meets Selina Kyle and his interest in the cat burglar motivates him to get back into the suit– a thought which is fast-forwarded due to the arrival of Bane and his army of terrorists, who roll out their far too elaborate plot to take control of Gotham and isolate it from the rest of the world.

Bane portrays himself as a populist, and a champion of the people, an idea that is exaggerated with his strike on the Stock office early in the film.  While there could have been some interesting elements to politicizing Bane’s motivations and actions, these concepts are introduced and then forgotten about in the more traditional action-heavy final act. Much like Prometheus, it plays out in a way that the creators had some intriguing, high concept ideas, but couldn’t keep them running parallel with the actual plot of the story, so they haphazardly cut them short instead.

**I’m probably going to star delving into spoilers now, so be warned– only read on if you haven’t seen the movie, or don’t mind getting spoiled on some third-act stuff!!**

While the reveal of Bane’s plan in action is thrilling and well-handled, with explosions going off all throughout Gotham and the crippled bridges that surround it, the resulting No Man’s Land never feels horrifying enough– it’s all still quite sanitized. Characters talk about how awful things are, and there is the threat of a ticking time bomb that will wipe the city out of existence, but with an army of heavily armed terrorists, a prison full of deadly convicts roaming the streets and Bane as warlord of Gotham, there’s no real portrayal of a sense of urgency or dread.  This flatness means the stakes of the big, brawling finale never feel as high as they should, and the whole war for Gotham really ends on an anticlimactic note.

In the meantime, we have the last main character, Marion Cotillard’s Miranda Tate, a Wayne Enterprises board member and seeming love interest for Bruce. One of the movie’s worst-kept secrets was her reveal as Talia Al Ghul, daughter of R’as, the eco-terrorist from Begins who served as mentor to both Bruce and Bane.  The reveal is pretty rote, and I imagine had I not known in advance– or been familiar with Talia from the comics– I’d be plenty confused as to what just happened. From my take it just further deflated the finale, as the too-short and remarkably static fist fight between Batman and Bane transitions quickly into a run of the mill chase scene as Talia makes her escape, in a scene nowhere near as visceral as the chases from the previous two movies in the series.

And then there’s the epilogue-heavy ending.  As you’d expect from a franchise like this, there’s more than a few little crescendos after the finale ends. Here they range from pretty cool to pretty bad, but there’s a string of bad logic that seems to run throughout.  With intercuts between the small funeral of the now broke Bruce Wayne, Alfred grieving for the man he abandoned about two hours earlier, and Blake receiving an invite from Bruce to carry on where he left off, there’s quite a bit going on in these final moments. I actually thought Nolan would have the balls to kill off Bruce Wayne, as the hero seemingly sacrifices himself in an explosion as Bane’s bomb is dragged out to sea to neutralize its devastation on Gotham and the city’s inhabitants. But no, Bruce made it out and faked his death, to give himself the fresh new start with Selina that Alfred always wanted for him.  Meanwhile, Blake is given access to the Batcave, and adopted as heir to the cape and cowl of Batman– beneath Wayne Manor which has been turned into an orphanage.  I’m actually really cool with the idea of a new Batman, and Levitt was so good in this movie that Blake’s new role is one that feels completely earned, far more so than Bruce’s very contrived happy ending.

Overall, The Dark Knight Rises was certainly an ending for Nolan’s story. While there was a lot to love throughout the film, with some truly amazing sequences and character moments, the overall package feels like it collapses under the weight of its own lofty goals, not unlike Prometheus earlier this Summer.  It’s absolutely worth seeing, and worth discussing, so more than anything I urge you to see it and decide for yourself if you think this ending does justice to Nolan’s trilogy.