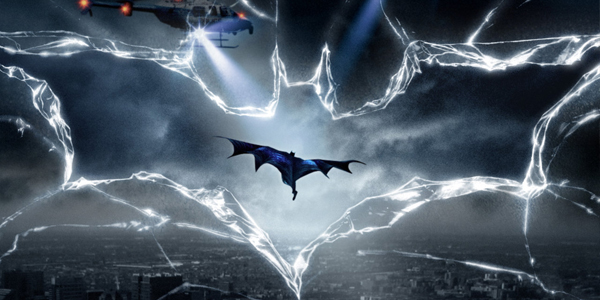 Now that a good many fans have had the opportunity to catch The Dark Knight Rises, I feel compelled to give my two spoiler-heavy cents. While my admittedly low expectations were boosted slightly from an initial wave of positive reactions from theatergoers, I walked away from the film underwhelmed not only by a poor screenplay but, for the first time in a Nolan film, questionable direction.

During a grandiose opening number, Bane (a mercenary who sounds like Patrick Stewart doing an imitation of Sean Connery while shouting into an empty Kleenex box) makes his debut while hijacking a plane in mid-air.  Despite the booming score and ostentatious set pieces, the scene, much like the two-and-a-half hours that followed it, is largely unexciting, nonsensical, and little bit silly.

While any number of Batman’s cast of villains would have been better suited to carry a full-length movie, I knew that Nolan at least had the good sense to portray Bane as an intelligent, calculating man – the polar opposite of Joel Schumacher’s take.  And a good portion of the film fooled me into believing that Bane did in fact have a fiendish master plan with the motives to back it up.  Bane’s actions early in the film led me to believe he may have taken a route that echoed the Knightfall Saga in the comics in which he takes a series to measures to systematically wear down Bruce Wayne physically and mentally.  Instead, the film finds Bane (and in fact all its characters) making increasingly cryptic decisions and introduces exceedingly ham-fisted plot twists until it just ends up falling apart by the third act while struggling to maintain a cohesive narrative.

But I’m getting ahead of myself.  Before we really get to know Bane, we are re-introduced to the main character of the movie, Bruce Wayne, who (for some reason) is now a crippled shut-in who lost all his joint cartilage(?)  Following the events of the previous film, Batman is a fugitive but, more importantly, is no longer “needed” in Gotham now that crime is down and citizen morale is up.  So basically, in Nolan’s universe, Bruce only dons the cowl when a super villain comes to town – preventing petty crime is apparently below him.  Eventually though, he suddenly decides to come out of retirement and make a public spectacle of himself.  I appreciate the filmmakers sticking to Batman’s character-defining “no killing” rule but why turn him into an attention seeker?  All three of Nolan’s films, and really every live-action Batman movie, have been basically devoid of any sort of real detective work.  Instead, here he relies on Lucius Fox and his young cop friend to do all the legwork while he charges headfirst into battle.  Even so, if the goal was to turn Batman into an action hero, the least they could do was give him some screen time. What we got in The Dark Knight Rises was an oddly paced story that puts Bruce through not one, but two rounds of rehabilitation of the mind and body while baddies trash Gotham.

And why are they trashing Gotham?  Good question.  I’m not sure the villains know either.  See, it turns out that Bane is head of the League of Shadows and sworn protector of R’as Al Ghul’s daughter Talia.  Yes, Talia is in the film the whole time right under our noses, but her big reveal is anything but memorable because she was such a non-character throughout the movie.  It also takes all the wind out of Bane’s sails as he is downgraded to a lowly, whimpering sidekick role in the last minutes of the film.  In fact, the entire League of Shadows angle is completely unnecessary.  Their intentions in the first film were ridiculous enough (they singled out Gotham City to “cleanse” through anarchic destruction because it was a cesspool of crime and corruption) but, after Gotham proved the good of its citizens in the last film, how can they justify their actions now?  Well, they seemingly can’t because the League’s intentions get more and more ambiguous as the movie progresses.  For starters, they are in possession of a nuclear bomb that they can detonate at any time but prefer to just let the timer run down – just to make sure that they give everyone at least 22 days foil their plans.  They must have been pretty confident that Batman couldn’t stop them though – after all, they left him in a completely unguarded prison with a spinal injury so severe it took days to recover from. All the while, Bane spouts inane drivel about the current unruly state of the city (of course it’s out of control…he just released scores of murderers and rapists back into society) while he televises Gotham’s decline in Bruce’s holding cell.  Essentially, it’s the identical plot from the first movie, but this time the League had to send Gotham back into the abyss of lawlessness to justify wiping the slate clean?  Why not just blow it up right away since that was the ultimate plan all along?

So eventually Bruce escapes from his cell in let’s say India, and then manages to quickly travel halfway across the world to Gotham somehow, without any money or equipment.  Despite the very title of the movie originating from this specific series of events, it came off completely anticlimacticly.  In any case, he conspicuously appears back in Gotham for a chance encounter with Selina Kyle.  Although I could technically do this entire review without mentioning Anne Hathaway’s portrayal of Catwoman, she did handle the character as well as you could expect.  The problem is that she was absolutely detached from the narrative and, as such, not needed in the film.  Her role could have easily been omitted without affecting the movie in the least.  Similarly (although Bill may disagree) I also found John Blake, the young detective I briefly mentioned earlier, along with his epilogue sequence at the end to be pretty tacked-on. Furthermore, the entire second film in the trilogy is rendered moot and may as well have not existed. Literally every plot point that was carried over from the film (really all you need to know is that Dent and Rachel are both dead) is reflected in a negative light.  Bruce’s idea for Gordon to call in a manhunt on Batman following Harvey’s death blows up in his face…well, not really, but he feels bad about it anyway. And Alfred’s decision to burn Rachel’s letter ends up creating a rift between him and Bruce that causes them to go their separate ways (which is completely absurd).  Aside from that, the story just rehashes the worst ideas from the first film and presents them in an even more incoherent fashion.

Finally, after nearly three contrived and, frankly, boring hours, the film ends on a sappy, Disney-esque note reflecting (in a send-up to a line from The Dark Knight) the ending Bruce deserves, but not the one this movie needs.  Bruce Wayne doesn’t get to be happy because he’s Bruce Wayne.  He must feel pretty confident in the new, penniless crime-fighter he chose to be his successor while he is off decidedly not protecting his city, but rather starting a new life with the woman who less than a month prior stole from him and got him beaten half to death.  Concurrently, Selina Kyle is enjoying her new life thanks to a magical USB drive that erases all traces of her identity from the world’s databases (what?).  Unfortunately, I feel like Nolan lost his way with this one.  Even if you’re the type of person that can ignore an inconsistent and, at times, downright stupid story in favor of eye-candy and expensive-looking action sequences (i.e. if you were a fan of Prometheus) you will still likely find the general flow of the movie to be uneven and the brief action to be less than breathtaking.  Disappointing for sure after Batman Begins & The Dark Knight’s slightly flawed but solid presentations.