‘The Hobbit: Desolation of Smaug’ Misses The Heart 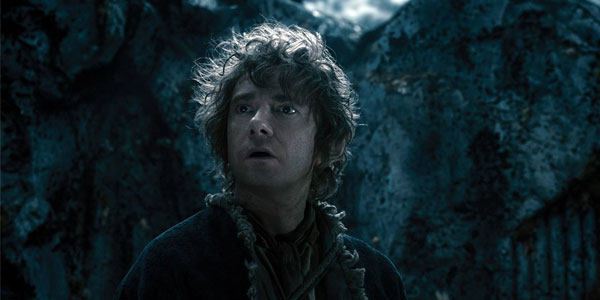 When it was first revealed that Peter Jackson was planning to adapt The Hobbit, JRR Tolkien’s beloved but slight children’s classic into a trilogy of Lord of the Rings-esque epics, many of us wondered how exactly he would do it.  Now, with the release of The Hobbit: Desolation of Smaug, we’re two thirds of the way in to the story, and the answers are becoming clear.

In regards to the second chapter of the Hobbit series, many reviews are likely to use words like indulgent, bloated and excessive in their descriptions; these are fair critiques for the middle installment which spends much of its time treading water and does remarkably little with its nearly three hour run time to advance the overall story arc.  But the padding is something we should have expected in the extended retelling of the original book, especially from a director with Peter Jackson’s “more is more” attitude.  The key issues with Desolation come from not the filler but its content, and how it affects both this film series, and Jackson’s own, far superior Lord of the Rings trilogy.  The glaringly bad shortcomings of this movie are almost offset by what it gets right, though, so it’s tough to write off Desolation as a complete failure.

The biggest issue in this Hobbit movie is the lack of Hobbits. Martin Freeman’s fantastic Bilbo Baggins is releagted to a background character for much of the film, making way for lots more of Legolas and the Mirkwood elves than we need, plenty of mythology tossed onto Thorin Oakenshield and his quest to recalim his underground throne, Gandalf’s increasingly problematic search for the evil Necromancer, and even Bard and the other denizens of Laketown.  Bilbo, our should-be star, is overshadowed by all these other players, few of whom bring the same level of energy and warmth to their roles as the diminutive hero.

I’ve never been a book purist– I think a good adaptation has every right to make the changes, additions and subtractions needed to translate a story into a new medium.  As such, I had no real problem with adding Orlando Bloom’s Legolas back into the fray, or even the addition of his fellow woodland elf Tauriel (LOST‘s Evangeline Lilly), a new character created for the movie.  It’s not their presence, but what is done with the elves that’s indicative of the bigger issues with Peter Jackson’s Hobbit.  In the Lord of the Rings series, it was thrilling to see Legolas sliding down the trunk of a gigantic elephant-like beast, firing his arrows into the heat of combat.  It made for a great action beat, a moment to stand up and cheer at how visually cool this guy is.  In Desolation, Legolas slides around and fires arrows behind his back constantly, desensitizing any impact to his CGI assisted stunts, and also making his less showy (and yet more realistic) actions in the LOTR movies make him seem like a slacker in comparison.

Lilly’s Tauriel felt like a welcome addition, despite her relative pointlessness to the overall story and a few too many CGI-fu moves of her own.  I liked the idea of another strong, capable female being added to this world, although it was equally frustrating when she was almost immediately shoehorned into not only a romance, but a silly would-be love triangle between Legolas and Kili the dwarf.  Aside from these all-new movie inventions, moments from the book are also extended unnecessarily, in subtly disappointing ways.  Luke Evans’ Bard gets a lot of screen time, which at first feels welcome– he’s a good character, and feels worthy of fleshing out a bit more.  But by the end, we’re dedicating far too much time to Laketown and its relation to the prophesy of Thorin’s return to the dwarf throne.  Not even the always welcome Stephen Fry as Laketown’s lord can save the heavy handed mythology from slowing the story down.

There’s one offender, though, worse than any other, and it’s a character I never imagined would cause such a problem in the cinematic LOTR universe– Gandalf.  The Grey wizard spends much of this chapter investigating the dark Necromancer, only to find him amidst his orc army… and discover who he is– Sauron.  The battle scene that ensues is the worst we have seen not only from this series, but from Jackson’s entire filmography.  The cheap CGI backdrop and equally cheap CGI orcs that populate Sauron’s fortress would be bad enough, but the reveal of the Necromancer’s identity is so campy and heavy handed, it’s embarassing, and Gandalf’s delivery of “Sa- Sa- Saurooonnn!” will surely go down as the LOTR version of Darth Vader’s infinitely lame “Nooooooo!” from Star Wars Episode 3.

But this misstep causes far bigger problems than being just a bad scene in the movie– by having Sauron appear here in a physical form, we ruin the most important mystique of the character.  Sauron is an unseen force, omnipresent but disembodied, an ominous cloud over everything as opposed to a physical monster.  Having him appear in physical form is a mistake Jackson himself corrected during the final battle of his Return of the King movie ten years ago, but it’s a lesson he clearly didn’t learn as well as he should have.  The reveal of Sauron also spoils Gandalf as any kind of competent character– 60 years go by between the events of The Hobbit and the start of Lord of the Rings.  It has always been assumed that Gandalf dedicated this time to investigating the Necromancer, trying to establish who he is, only to confirm his hunch that the Dark Lord has returned during Fellowship of the Ring.  Having Gandalf make this discovery in the middle of The Hobbit means he, what?  Sits on this information and does nothing for over half a century before re-discovering the same thing in Fellowship and telling his presumed ally Saruman?  At best, this will take some retconning in the third Hobbit movie to maintain continuity between this trilogy and the LOTR movies… But even then, any time spent on it will be wasted, as the entire setup is both clumsy and pointless to include.

Like I said earlier, Desolation of Smaug isn’t all bad.  There are actually a number of great moments and characters that are so good, they almost let me forgive the movie’s many stylistic and thematic problems.  The best is the dragon– While he does not finally appear until nearly the two hour mark, Smaug is perfect in every way.  The design, the voice, his entire interaction with Bilbo… Smaug is a serious presence and I couldn’t take my eyes off him.  It helps that he gets to play opposite one of Bilbo’s few actual starring scenes, and Freeman brings his A-game as the two size each other up in the vast CGI treasure room of the Lonely Mountain.  Benedict Cumberbatch struck the perfect chord for Smaug’s voice, and even acted in the mocap suit to animate the dragon, and like past virtual actors such as Andy Serkis’ Gollum, the difference is very easy to notice.

In addition to Smaug, Bard and Tauriel, Lee Pace is great as the smug elf king Thrandruil, and despite his green screen action hero vibe, it was nice to see Orlando Bloom return to the role that made him a star.  For it’s nearly three hour run time, Desolation is well paced enough to not feel as long as it is… although some portions definitely still drag, the final act flies by as the dwarves attempt to slay Smaug and reclaim their home.  Despite the long run time, this movie did not advance the story nearly as far as I imagined it would, so there is still plenty to do in the final installment when it hits theaters next year.

The shape of that final movie is coming together now, and it’s becoming as clearly defined as the lame Sauron appearance in Desolation.  On one hand, I am glad to see Smaug’s attack on Laketown and the Battle of the Five Armies come to (at least partial) life on the big screen… but the various mythologies of the extended cast in this series will likely continue to overshadow Bilbo and his quest more than ever.  In a story about, at its core, how the little guy can stand up to truly impossible odds and come out on top, The Hobbit remains in serious danger of burying its greatest hero with too much stuffing.