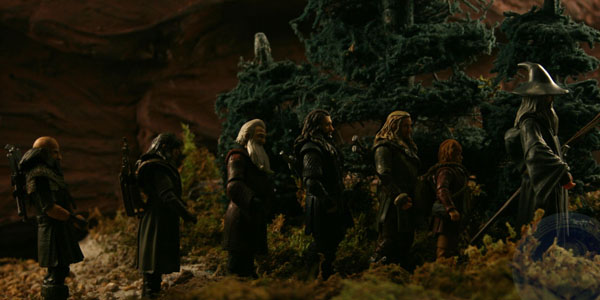 Over a decade after the seminal Lord of the Rings movie and toy line were released, The Hobbit is ready to hit theaters and The Bridge Direct has launched a new toy line which feels like a direct extension of the legendary Toy Biz collection. 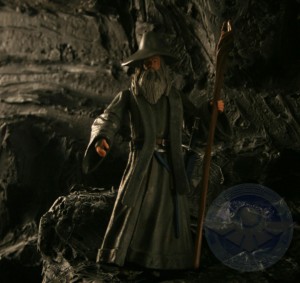 The Hobbit will see a return of Peter Jackson to the cinematic Middle Earth he created for Lord of the Rings, and so far everything we;ve seen from the movie is filled with a warmth partly tied to the classic children’s tale the movie adapts, and partly due to nostalgia of revisiting this wonderous world.  It makes sense that the new Hobbit toy line by Bridge Direct, would follow suit with a collection of toys that immediately recall the Toy Biz figures from LOTR.  And considering just how good the LOTR line was, that’s a strong compliment.

Bridge Direct is offering two scales of action figures for The Hobbit, a 6″ line that is tied directly to the LOTR line in scale and detail, and a 3.75″ line, a new scale for the world of Tolkien.  After much debate, I opted to check out the 3.75″ scale figures, as I always thought this would be the ideal size for an expansive Middle Earth toy line, complete with in-scale beasts, playsets and all the other cool stuff we all love from the novels and movies. 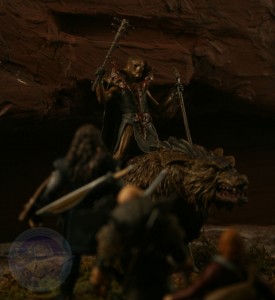 When I say 3.75″ scale, I mean just that– ironically only about two of the figures released thus far actually measure up to this height, as Bridge Direct have done an incredible job of keeping scale consistent between the many characters, from the towering orc Bolg, to Thorin Oakenshield and his company of dwarves, to the even smaller titular Hobbit Bilbo Baggins.  The commitment to accurate scale is awesome, and does a lot to make these figures feel as accurate as possible, while at the same time making for a wonderfully dynamic display of all the various creatures, heroes and villains.

The sculpting on these figures is also top notch, especially considering the small size of many of them. From the links and plates of armor to the gritty fabric of Gandalf’s robe, each figure features a great sense of texture that adds to the realism of the sculpt, while the frequent use of soft rubber overlays keep articulation useful without interrupting the aesthetics of each figure.  The portraits are quite good as well, with the familiar snarls of the orcs and goblins from PJ’s previous movies to the exaggerated features of dwarves like Dwalin and Balin.  These figures also peg the actor portraits, particularly Orlando Bloom and Legolas and Ian McKellen as Gandalf.

I mentioned articulation earlier, and it works quite nicely, with a universal pattern for each figure including a ball socket head, swivel waist, ball shoulders and hips, half-ball elbows and knees and swivel wrists. The articulation works nicely, and doesn’t lend itself to any loose joints, while allowing for plenty of cool posing options.  I do with ankle hinges had been included, because some of the figures are a little unsure on their feet, and poseable ankles would have helped stabilize them.  Aside from this one missing moving part, the figures have a great style and feel to them, while the scale helps them look excellent all together. 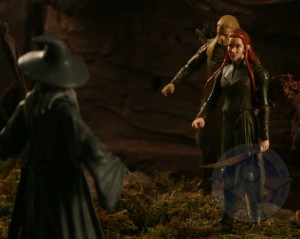 Paint apps are surprisingly solid for all the figures, many of whom include nice, subtle washes which accentuate the realism of their earthy costumes, and they match the medieval tone of PJ’s films wonderfully.  It’s typical, especially in smaller companies not used to action figures like Bridge Direct, that paint apps end up all over the place, but everything here, from the clean, crisp eyes, to the grey streaks in Gandalf’s beard and Thorin’s mane, to the sickly, bacon-fat skin tone of Grinnah the goblin are perfectly executed.  Accessories are included with virtually everyone, and are also beautifully scaled to the figures, not too big or too small. There are a few issues with figures holding their gear securely, as the sculpts are designed to be more naturally open, like a real hand, than cupped in a circle to hold an accessory. With a little rigging, even the most unstable of pieces, like Gandalf’s staff, stay in place securely.

Bridge Direct certainly went all-out with an expansive launch wave, as well… there are plenty of options to choose from to assemble your residents of Middle Earth. When it’s all said and done, we get Gandalf and Bilbo, Gollum, Legolas and newcomer elf Tauriel, a handful of evil creatures and five of the company of 13 dwarves… not a bad start! 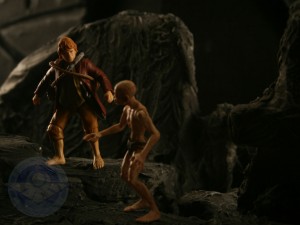 The best value by far is the hero five-pack, which includes Bilbo, Thorin, and three more dwarves, Kili, Fili and Dwalin. Each figure includes all the accessories their single-carded versions include, and at a retail price of $30 for five great figures, this set is a must-buy.  We get a multitude of main characters as single-card releases as well, but the price is a bit steeper at around $10 each– there are other packs which include every single figure but the goblin Grinnah, so I’d suggest sticking to the multi-packs if you want to collect the entire line.  There are two tiers of two-packs, the first of which includes pairs such as Kili and Fili, Dwalin and Balin, Bilbo and Gollum and an elf pack with Legolas and Tauriel.  A larger two-pack for a few bucks more includes Gandalf and his orc opponent Bolg, another wonderfully nasty PJ creation captured perfectly in toy form.  Other sets include a Warg with orc rider and the massive Goblin King, packed with Thorin.  It’s an ambitious volume of product for the launch of this new film series, but if you buy strategically, they can be a great value.  The one drawback is the doubling-up of figures in various packs, always a pet peeve of mine.  To assemble the main heroes on the cheap, the five-pack is the way to go, but it includes Dwaling who is also packed with Balin, who is exclusive to a twin pack set.  This means You end up with doubles on some figures, and there’s really no difference in their paint apps, sculpts or accessories.  It’s a minor quibble, especially when the figures all came out so great, but I hope future releases manage their mixout a little more effectively. 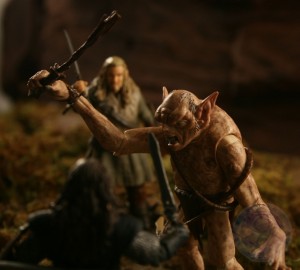 I wasn’t planning on picking up any of The Hobbit figures, especially in a new scale.  But when I saw them all sitting on the shelf at my local Toys R Us, I knew I was going to get sucked in, and they do a brilliant job of pulling me right back into the world of Middle Earth.  With great sculpts, excellent paints apps, good character selection and a phenomenal sense of scale, The Hobbit toy line is one of the nicest surprises I’ve seen all year.  I love the new scale, and I love the potential for this line to keep growing… if all their figures are as cool as wave one of The Hobbit, and especially if Bridge Direct can land the Lord of the Rings license for this scale, I’ll be happily back in Middle Earth for a long time! 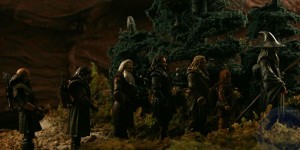 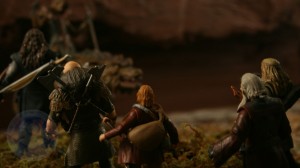 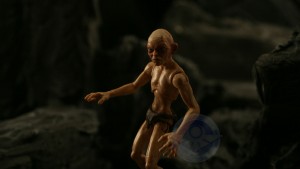 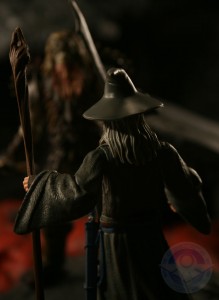 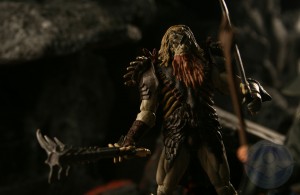 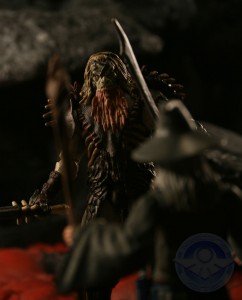 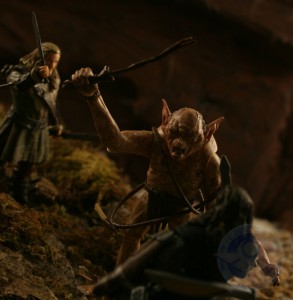 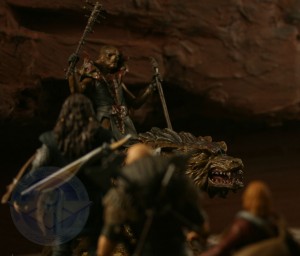 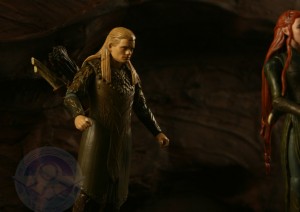 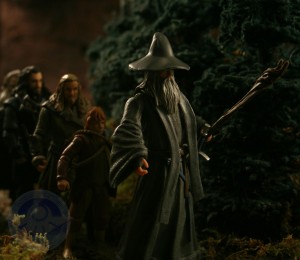 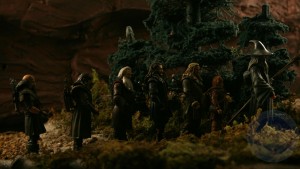 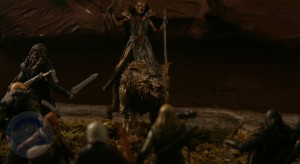 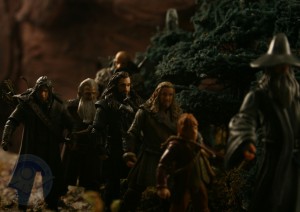 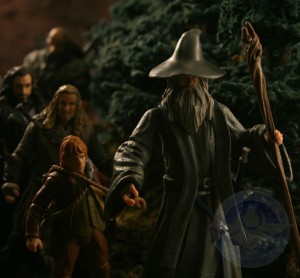