The Horde Grows By One and a Half 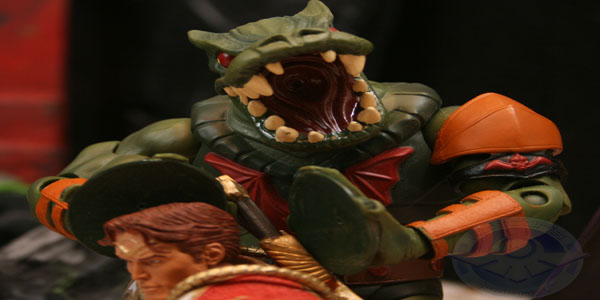 September gives us two new Masters of the Universe Classics figures, and both of them come from the same faction! The Horde has been building nicely with Hordak, Grizzlor, and Force Captain Catra. The energy-draining Leech and the quarterly variant Hurricane Hordak join them. Each come with their own pluses and minuses, but let’s see how the scales tip, overall. 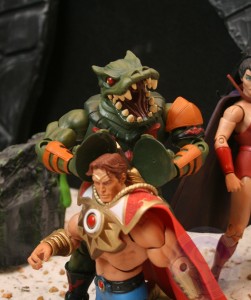 Leech has a ton of new tooling, making him visually stand out from the rest of the line. His body is wide but flatter than most figures. This has been a point of contention, along with his head sculpt, but this fan couldn’t be happier. The flatter look of his torso makes him further stand out from the rest of the figures, and it gives him an anatomy unique to his species. The head sculpt is a fantastic update to the vintage figure. It eliminates the action feature, but it vastly improves on the aesthetics of the vintage figure. All the details are there, from his weathered armor to the circular rings on his suction cup hands and feet. Hurricane Hordak has a lot of his old tooling, with new glossy blacks that makes the reused pieces stand out more. This shiny paint is appropriate given the gold vac metal armor he now wears. I have heard about the gold armor flaking, but as I am not removing his armor, nor really giving him heavy play action, this may not be an issue. On the other hand, long-term quality of the vac-metal is leaving a lot of fans on edge, and I can understand their frustration there. 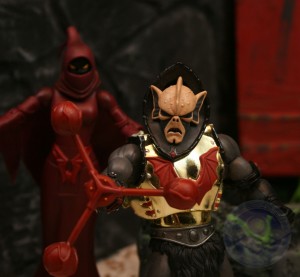 The weapons help both of these figures shine. Leech comes with his classic crossbow, re-designed to be more specific to his character. With no hand to hold it, he uses a wrist clip to brandish it. His new accessory is a very useful one for the character. His new Horde-shaped net is very essential for him, holding down his adversaries long enough for his suctioning feet to carry him to his victim. It even has suction cups like his owner! Hurricane Hordak pays homage to his Filmation character, mixing organics and technology. His right hand, when not looking like an arm cannon, can house three amazing, veiny, blood-red weapons. He chooses from a whirling propeller blade, a spinning bola, or a metal grabber claw.  Unfortunately, they are only for show. They were not tooled to spin. The grabber claw can’t open and close either. So much for caging Orko or the Doomseeker!

I really love how these characters look on my shelf. In spite of legitimate concerns about Hordak’s armor, and very vocal dissension about Leech’s sculpted features, I am extremely pleased with both figures. Leech adds to the Horde’s A-list, while the longevity of Hordak’s armor relegates him off the display shelf…for the moment. He can make a successful return if (and hopefully when) we see the Mantisaur make an appearance in the Classics line! It will need the leader of the Ruthless Horde to pilot him, after all!