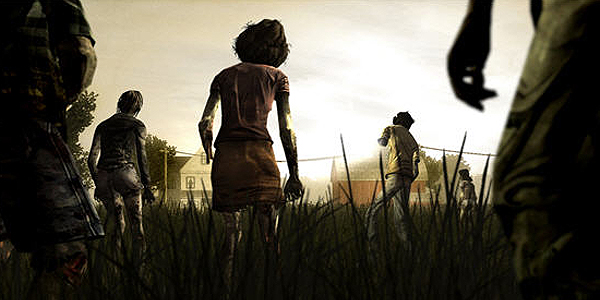 Developer Telltale Games is no stranger to building experiences around licensed material, but this time they’ve outdone themselves.  The Walking Dead:  A New Day has just been released for XBLA, PSN, & PC/Mac and I loved every minute of it.  Based directly within the canon of Robert Kirkman’s comic series, Telltale’s take on the franchise is an unexpected dose of drama that succeeds in all the places that AMC’s television series fell flat.  In less than three hours, this introductory episode (the first of five) has sold me on the new cast of characters while seamlessly working some familiar ones into a tightly-knit, intense narrative.  The result is an outstanding piece of storytelling that every Walking Dead fan needs to experience.

Episode 1 also takes place in the greater Atlanta area and introduces protagonist Lee Everett, who begins his adventure in the back of a police cruiser on his way to prison, conversing with an officer while subtly noticing a number of cops and helicopters racing into the city – seemingly responding to a disturbance.  Things abruptly take a turn for the worst and you quickly realize that you are indeed experiencing the beginning of the zombie outbreak.  The Walking Dead comic provided a perspective of a man who had awoken in a hospital to find the world that has already been overrun with walkers – but here, Rick is still comatose and you’re witnessing the start of horror. 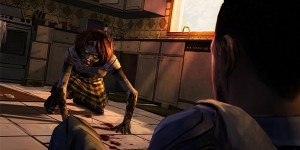 While there are many different dynamics at play, the game basically functions like a point-and-click adventure.  While moving Lee around with one stick, you also control a four-quadrant cursor with the other (or WASD & mouse on PC) which highlights different actions you can take to interact with objects and the corresponding buttons used to carry them out.  It’s a unique and intuitive mechanic that works really well in this title, coaxing players into scanning all their immediate surroundings for items of interest.  Soon after the jarring intro, we run into a young girl named Clementine who, like Lee, finds herself utterly alone and scared as the situation in the city quickly degenerates.  Setting off to find a safe haven before the sun goes down, Lee and Clem run into several survivors, three of whom comic fans will be very familiar with.  While it was awesome seeing some familiar faces and witnessing a bit of their backstory prior to where we found them in the book, it was even more impressive how seamlessly their presence was weaved into the game’s narrative – it really felt like I was playing an extension of the book. 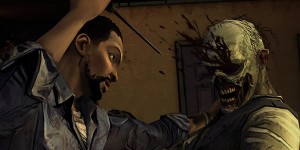 Telltale managed to exceed my expectations at every turn with the look and feel of the game.  Opting for a cel-shaded aesthetic with heavy ink outlines, it captures the charm of the comic art while the color palette furthers the dark, moody atmosphere.  Surprising for an XBLA title, the voice acting is top notch and the score/audio effects are legitimately creepy (I absolutely loved the radio broadcast reminiscent of the iconic news spot from Night of the Living Dead).  But fantastic audio and visuals aside, what really impressed me most about Episode 1 of The Walking Dead was the deliberate pacing and focus on character development in conjunction with a robust choice system.  Nearly every action you take and conversation you are a part of can be handled several different ways and these decisions will immediately effect how other survivors view you and can have lasting effects in future episodes.  Whether it’s a seemingly simple conversation option or a complex morality issue, Lee will have to take sides and make calls that won’t go over well with everyone.  Don’t expect to be able to sit around and mull it over while weighing the pros and cons though – the game gives you a short, limited window in which to choose your words and actions, forcing you to make the hard calls quickly, based on gut instinct.  You can always play through multiple times, however, to see how different choices affect the outcome. 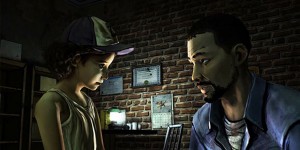 It’s not all just dialogue and weighty ethical decisions though, there’s a fair amount of encounters with the undead as well which play out equally well.  Quickly focusing the cursor on a roaming zombie’s head and clicking the appropriate button with make Lee attempt to take it down with a fatal blow.  You sometimes have to be a little quick on your toes to pull it off but the results tend to be some insanely cool-looking takedowns.  There are also some light puzzle-solving elements sprinkled throughout that typically involved finding a specific item and determining how to use it to your advantage.  Basically, there’s a decent amount of variation surrounding the goals you must achieve to move the game forward and, consequently, the title feels fresh and exciting throughout.  If you’re an achievement hunter, you may also note that this episode features 100 gamerscore points that are awarded during your playthrough and cannot be missed.

For under five bucks per episode, any Walking Dead fan would be foolish not to get in on this action.  The character development and tense, chilling atmosphere is a perfect companion to the book and is leagues above the AMC TV series.  The narrative has already sucked me in to the point that I can’t wait to dig into Episode 2 — Telltale Games’ The Walking Dead is shaping up to be an experience not to be missed.