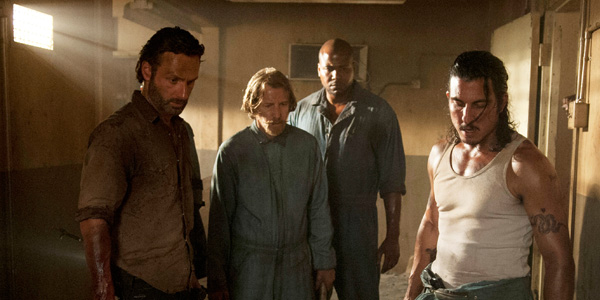 Shane may no longer be part of The Walking Dead, but his legacy is certainly driving the characters in the third season. How did day two in the prison go? Find out inside. The Grimes family is changing. Survival, not hope, is driving the family giving audiences some of the most suspenseful TV on the air today.

Rick has struggled to find his place in the Zombie apocalypse, and with every passing day it changes him. He has been trying to hold on to his humanity, while keeping those around him safe, but reality is starting to set in leading him into a new direction. This direction seems to be more Shane like than before. When faced with a limited food supply, the safety of his family, and someone threatening his role as leader Rick did the one thing that no one saw coming. When he took out Tomas with a machete to the head all we thought we knew about Rick went out the window. As if that kill was not shocking enough, Rick’s choice to leave the another inmate, Andrew, out in the yard to be eaten by zombies was gut wrenching. This turn in Rick can only be the result of the loss of Shane, and his realization that this new world has new rules, and he has to either adapt or die.

The matriarch of the Grimes family has also gone though a change, from the hard a nails female to a much softer character with a slight death wish. If Hershel loss of limb last week was the one of the goriest scenes in the show, Laurie giving CPR to a dying Hershel was the most “on edge of the seat” movement to date. Knowing that one bite would end her life and the life of the unborn baby, but still putting herself that close to a possible zombie Hershel, was great story telling on the creators part. Is it a foreshadowing of what will become of Laurie or will the baby open her eyes and make her more cautious?

The final member of the family who showed a change is Carl. He was only in a few minutes of the episode, but he had a huge impact. Running away from the group to explore the prison on his own and getting medical supplies was a surprise. Taking into account what happened last time Carl took off, Dale’s death, it shows the character is growing up and able to not dwelling on the past. Will Carl become the badass of the crew in upcoming episodes or will his recklessness make him one of the walking dead? Only time will tell.