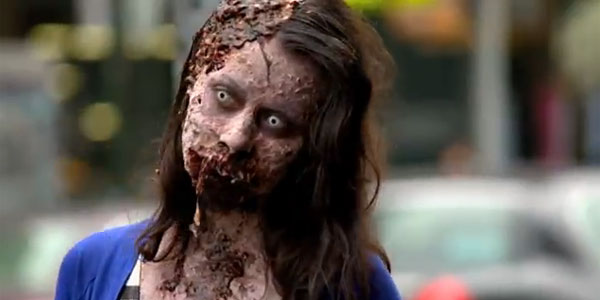 AMC’s The Walking Dead unleashes zombies in the big apple in their ongoing campaign against DISH network.

If you’ve been watching the latest incredible season of Breaking Bad– or any other AMC programming– you probably know that DISH Network has dropped the network from their service.  AMC has been pushing back in an effort to pull their DISH viewers to another, AMC-friendly provider.

The campaign went viral when it took to the streets for a zombie crawl video shot in New York City to coincide with the launch of the “Put Zombies Back” leg of the AMC vs. DISH camapign. AMC is really pushing their top-tier shows as the motivation for viewers to make the jump away from DISH, and Walking Dead is probably the most tame show they could adapt for a viral stunt (they can’t exactly cook meth in Manhattan to support Breaking Bad, right?).

What makes this video cool are the makeup effects used to transform these actors into the undead.  The zombie makeup here is top-notch, every bit as creepy and textured and nasty as the Walkers featured on the AMC series.   A surprising amount of New Yorkers in this video are visibly scared or startled– proof the makeup looked just as good in person, as otherwise the NYC natives would react with expected indifference.