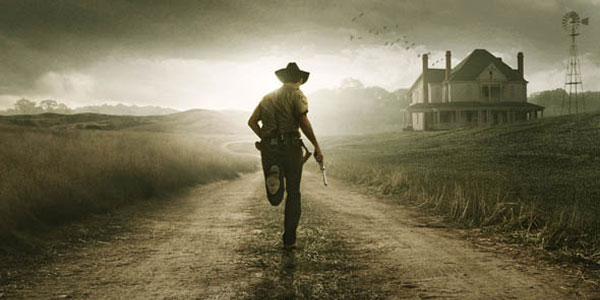 Anchor Bay has released the second Season of AMC’s The Walking Dead, in a set that collects all 13 episodes, plus a solid selection of special features that add to the zombie experience way more than shedding any light on this season’s behind the scenes drama.

I had my fair share of problems with The Walking Dead Season Two, especially as the AMC original’s sophomore season came to a close with, in my opinion, was some gross mishandling of our main characters and some clunky intro/ teaser scenes of what’s to come that didn’t exactly leave me excited for more.

If you’re in the minority that didn’t care for the way Season Two played out, I can’t say a rewatch of the whole season will do much to change your mind.  Revisiting the whole run start to finish on this set still reminded me of the weird pacing we saw in the first half of the season, and heaven help me, I still like Rick and Lori way, way, WAY less than I think I’m supposed to at this point.

What I will say about this collection of episodes is how much good stuff was going on, even as the plot started moving in some questionable directions.  Jon Bernthal’s turn as Shane is awesome, and his arc this season plays even stronger watching the episodes in succession.  I was also surprised by how much I dug “Judge, Jury, Executioner” on the second go-around.  The normally sanctimonious Dale came off as much more sympathetic in light of knowing the tragic fate that awaited him, and Jeffrey DeMunn is a joy to watch as he puts his all into what is basically a zombie riff on Twelve Angry Men.  The massacre at the Barn, the standoff in the bar from “Nebraska,” Andrea’s evolution into at least a hint at the badass we all hope she’ll become, and Daryl’s bad trip all remained really great scenes, well crafted, sharply written, and of the quality we’ve come to expect from the comic series as well as the programming folks at AMC.

The other thing that really shines is the amazing– and amazingly grotesque– makeup and effects work, from mastermind Greg Nicotero.  This was one grisly, bloody season, and every sinew and entrail and exposed bone look wonderfully visceral on the Blu transfer.  The envelope-pushing nature of the season’s gore also accounts, logically, for quite a few of the bonus features.  We get some cool glimpses at Nicotero and his team of gorehound wizards in action in features like “All the Guts,” “Sound of the Effects,” and “In the Dead Water” which delves inside the infamous well zombie sequence.

We also get some character/ actor profiles that give some light insight into Shane, Dale and Andrea, including a cool running gag featuring “In Memoriam” placards for the dead characters at the end of their features.  The rest of the special features revolve around what you’d expect– Robert Kirkman has a decent talking head interview in which he discusses the much-talked-about differences between the comic and series (fun fact: like the comic, the original plan in the show was for Carl to shoot and kill a still-living Shane!).  There’s also a feature on Nicotero, which does a nice job of documenting his evolution from makeup man to producer, to director of one of the season’s most moving episodes.

Other supplemental features for this set include the pretty cool webisode series “Torn Apart,” which tells the tragic tale of the Bicycle Girl zombie from Season One, as well as deleted scenes.

The deleted scenes are actually the most interesting aspect of the bonus features.  I watched these last, and while they still don’t mention him by name, it’s the only place you get a hint of Frank Darabont and the early-on behind-the-camera trouble that lead to him being ousted as showrunner after the Season Two premiere.  While this entire affair was fascinating to follow, I can’t say I’m surprised AMC opted to not air any dirty laundry on the Blu set, but to their credit they do include some large chunks of footage from Darabont’s abandoned premiere episode. We get to see the survivors revisit the Vatos from Season One, learn some cool new subplots that were abandoned, and lots more cool little segments that offer an intriguing look at how the season might have been set up in a parallel universe.

I rather liked much of what was cut when Darabont’s premiere was chopped up and meshed into what became the 90-minute premiere “What Lies Ahead.” My opinion is clearly not shared by current showrunner Glen Mazarra, whose commentary track explaining the deleted scenes is quite informative while making him seem almost superhumanly unlikeable.  Notably absent, even as a special feature here, is the much-discussed original opening Darabont had crafted, which would have flashed back to the initial outbreak, ending with the dead guy Rick encounters in the tank in Atlanta.  Whether this means Darabont never filmed the scene, or that the current team is holding it to possibly recycle in the future is up in the air, but what we get here is a mix of justifiable cuts and some stuff that would have made very cool sub-plots to flesh out this apocalyptic world.

Like I said, The Walking Dead Season Two Blu Ray didn’t immediately heal my wounds from the troubled sophomore season, but it’s packed with some interesting looks behind the blood-spattered curtain, and it left me resolved to absolutely give Season Three a fair shot before making my final decision on this series.  For the majority of fans who, apparently, LOVED Season Two, I’m sure you’ll like the Blu Ray even more than I do.

The Walking Dead Season Two is available now on Blu Ray and DVD… and the amazingly cool Special Edition packed in a zombie head, courtesy of Greg Nicotero and McFarlane Toys.