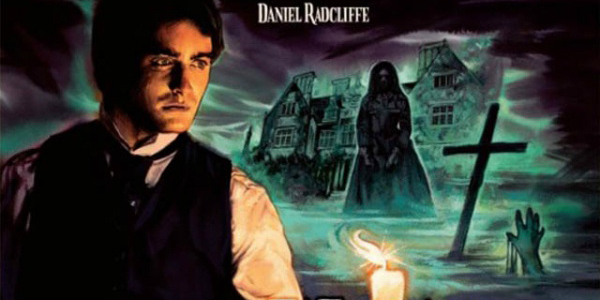 The Woman In Black marks the third movie released by horror film icons Hammer since their return, and the movie– starring the former Harry Potter Daniel Radcliffe– is the first movie that deserves a place in Hammer’s hall of fame. Atmospheric, dark and more than a little spooky, The Woman In Black is a great addition to the grand Gothic Horror tradition.

Right from the beginning, The Woman In Black tells you it’s the kind of movie you haven’t seen in a while. The turn of the century production value is excellent, and Daniel Radcliffe makes a striking leading man, a widow captured perfectly in his son’s doodles as a man who never smiles. Arthur works for a law firm, and has been charged with investigating the Eel State Manor for a potential foreclosure. The details of the plot are secondary, as is often the case with even the best horror stories– what matters is getting Arthur to that house, to unravel the terrifying mystery hidden by the superstitious townspeople.

There really isn’t much that we haven’t seen in The Woman In Black— weird, hostile visitors from the small, simple town glare at the unwelcomed visitor Arthur, the manor itself is filled with countless creepy props, from scary wind-up toys to stylized chairs, votives and pretty much everything else. But what it lacks in originality, this movie more than makes up for with a strong sense of style and pace, solid acting and the confidence to go old-school with both the story and the scares– there’s plenty of jump-cuts and cheap scares to be seen as Arthur delves deeper into the house and its former residents, but what sticks with you most is the atmosphere and tone of the movie… as much as I say it’s a classic-style movie, that isn’t to say it’s soft. In fact, more children die in this movie than any other I can recall in recent memory, and the movie isn’t afraid to get really dark toward the end.

When our hero finally discovers the secret of the Woman in Black, he rolls out his plan to set her at peace– this is a scene we’ve seen a lot of times before, and I was afraid the style and class that had impressed me for the previous  would be out the window during this big, broad set piece. But despite some little hiccups toward the end, they absolutely stick the landing and aren’t afraid to make their ghost pretty damn nasty.

I really love how the scares comes from the right places– atmosphere, heightened sound effects, creepy set pieces… it’s refreshing in this day of found footage and post-SAW knockoffs, and even with ghost designs that flirt with the Japanese meowing children trend from a few years ago, the style of the film, the mystery of the ghosts’ intentions and the Gothic tone of the proceedings give the ghosts a decidedly weirder and more unique appeal.

Daniel Radcliffe is pretty great, proving much like on stage he has a long leading man career ahead of him post-Potter. He’s been pretty bold and obvious about not being typecast as the Potter type, and that pretty much continues here… there’s a few Potter-isms that still come through, especially in the supernatural-meets-detective sensibility of the movie, and like Harry Arthur, while flawed, is pretty much the universal good guy throughout. Radcliffe has really emotes in this role, conveying the young man’s sadness with those piercing blue eyes throughout the movie. As he digs deeper and deeper into the sordid mystery that led to the ghost’s existence, you can’t really tell how much of Arthur’s interest is based on curiosity, and how much on a lack of fear over dying, due to his grief over his wife four years earlier. He makes a great leads, and the supporting cast is pretty solid all around.

There’s a lot of twists and turns to the mystery and I’m not going to spoil them here– half the fun of movies like this is watching them unfold, and The Woman In Black really works as both a compelling mystery and a Gothic Horror tale. With a strong sense of style and atmosphere, a very solid cast lead by Radcliffe, and the confidence to stay classic and avoid pretty much all the cliche’s of today’s horror movies, this movie really is worthy of a place in the Hammer archives.