THIS IS THE END Is Thoroughly Half-Baked 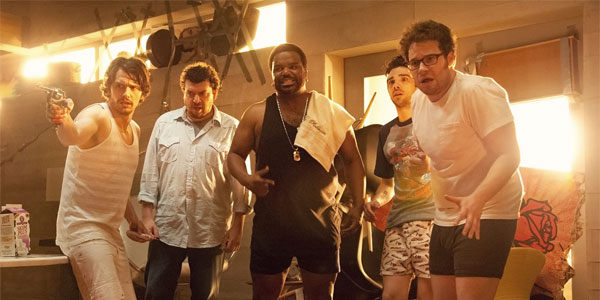 The stoner apocalypse comedy is as funny and amusing as it is uneven and sloppy.

This Is The End is by no means the first stoner comedy, or the best.  It’s not even the first stoner tale to feature the Judd Apatow posse including the likes of Seth Rogen, James Franco and Danny McBride.  But when you’re dealing with a movie filled with modern comedy heavyweights like this, even a mediocre movie is guaranteed to have moments of brilliance.  That’s exactly what This Is The End will deliver.

The premise here is very simple– Seth Rogen, Jay Baruchel, James Franco, Jonah Hill, Craig Robinson, Danny McBride and a litany of who’s-who of comedy cameos all play themselves (or at least varying degrees of parodies of themselves) at a Hollywood party, which takes place during the very literal apocalypse.  Things turn badly very fast, as many of the celebs are swallowed by a gaping sinkhole that serves as the maw of Hell, or die by many other graphic circumstances, leading our survivors to hole up in Franco’s mansion to try and ride out whatever this disaster is.

As the guys continue to live under lockdown, their friendships and rivalries come to the surface, amidst many bits as they re-enact callbacks to their previous movies, argue uncomfortably about inappropriate things, and indulge in their collective stash of drugs and junk food.  The main story focuses on Rogen and Baruchel, the former being newly adopted in the Hollywood “in-crowd” while his old buddy from back home opts to avoid the glamor of the super star lifestyle.  The duo play things straighter than their co-stars, but it works based on Rogen and Baruchel’s remarkable on screen chemistry.  These guys haven’t shared much screen time since the TV series Undeclared, but they waste no time in selling themselves as long-time best friends here, even amidst these increasingly crazy and dire circumstances.

Coming between them are Franco and the rest of the “cool kids,” who the on-screen Baruchel actively dislikes.  While James himself avoids any extreme skewering (playing Seth’s new BFF), Jonah Hill and Danny McBride each get to play much broader, with Hill as an aggressively empathetic goody two-shoes and McBride as a bigger white trash timebomb than the characters he typically portrays.  The whole gang play off one another very well, and when the movie gets loose enough to let them improv their way through completely wrong debates over NOT sexually assaulting Emma Watson, or who gets to eat the single Mily Way, or filming their own DIY version of Pineapple Express Part Two, the movie shines– it’s hard for these dudes not to be funny, and each gets plenty of moments to shine.

The loose riffing of the sextet works well, but doesn’t quite match up with the story, which is a bummer because the plot itself is silly enough to feel novel.  With the recent influx of doomsday scares and other apocalyptic fear-mongering, it’s refreshing to see a comedy lampoon these nonsensical theories head-on.  As the apocalypse goes from bad to worse, we also get some better than average effects work, including a CGI demon which shamelessly ape one of the best visual gags from the last GREAT stoner comedy, Your Highness.

That’s representative of one of the major problems with This Is The End— the movie relies on knowing who these actors are and having seen their previous films, but it doesn’t really offer much that we haven’t seen before.  A lot of this film feels like a callback to previous, more original flicks starring one or more of these actors, making This Is The End feel less than the sum of its parts.

One aspect that does work is the use self-portrayed characters.  In addition to providing a solid through-line for Seth and Jay’s plot, the movie plays with spoofs on virtually the entire extended Apatow comedy family.  Not all the jokes land, but when they do they are laugh out loud funny.  Small parts from Michael Cera, Emma Watson and Channing Tatum, in particular, are scene stealers– Cera’s coked out train wreck absolutely owns every frame he’s in, Watson is channeling an inner badass we’ve never seen from her, and Tatum’s surprise cameo is a perfect shocker of a reveal.  There’s lots of comedy in This Is The End, from the boatload of references to shock humor to drug gags to really broad stuff.  The more obtuse jokes are the ones that typically land best, and I love the meta-gag that no Hollywood actors would be included when the virtuous are raptured.

As first time directors, Rogen and long time comedy partner Evan Goldberg do a capable enough job, with a surprising sense of scale in the last act. However, the movie is awkwardly paced, and feels way longer than its 107 minute run time.  Considering their background, it seems strange that Rogen and Goldberg would forget the golden rule that timing is everything when it comes to comedy.  I applaud their kitchen sink approach to This Is The End, but all the varying pieces never quite gel together into one consistent whole.  When it’s on, this movie is ON– but the pacing needs to be tighter and the comedy given more free reign, in order to come close to standing shoulder to shoulder with the best works of these modern comedy all-stars.