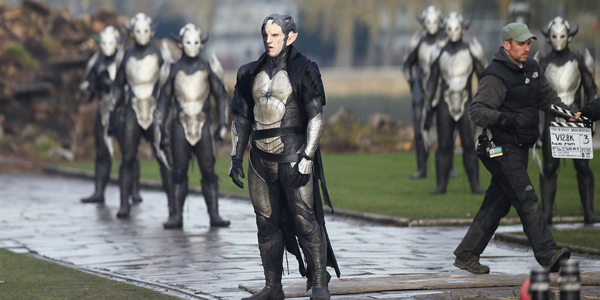 Two costumed group shots have leaked from the London sets of Thor: The Dark World, giving us our first look at the movie’s new villains.

We’ve known for a while that the main bad guys in the Thor sequel would be the Dark Elves, under the leadership of Malekith the Accursed, and now thanks to a few pics that have surfaced from the film production, we can see how these creatures will likely look on the screen.

Most of the elves are obviously Malekith’s army, but we get a shot of the leader himself, played by Christopher Eccleston, whose look is surprisingly faithful to the comics version, from the two-toned face to the star on his chest: 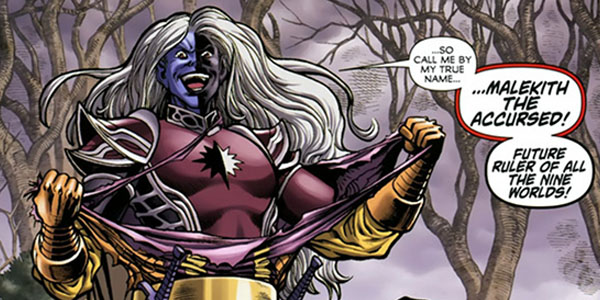 I really dig these costume designs.  I think they fit the designs of the first Thor movie, and the Chitauri in The Avengers nicely, while still having a fun, very comic book-y feel.  There’s no sense of these characters being “grounded,” which is also good– Marvel Studios’ biggest strength as a brand is their utter avoidance of any grim and gritty, realistic shackles binding their comic book movies, and the result has been something that feels more like a real comic series than any other adaptations in the past. 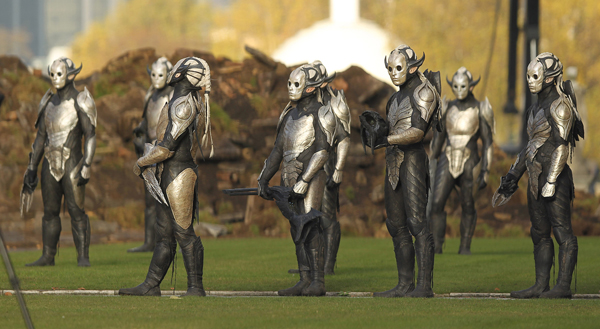 I’m one of the minority who really like the first Thor, and these pictures are already getting me stoked to see the sequel a year from now.