Thor Brings The Battle Between Worlds In New Trailer 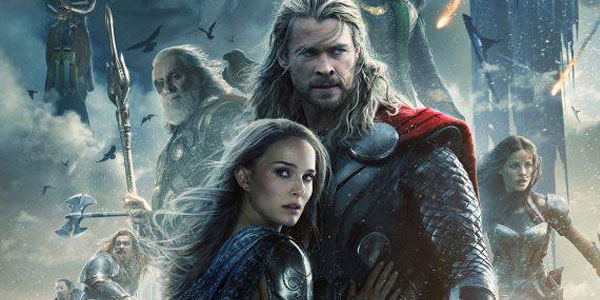 Thor: The Dark World continues to impress with the latest trailer.

That’s two in a row for Thor: The Dark World!! We got another very strong trailer as part of YouTube’s Geek Week today, and it continues to suggest we’re all going to get what we hoped for come November– some big scale, epic action worthy of the lords of Asgard.

The new trailer really plays up Loki’s role in the sequel, and it looks like Tom Hiddleston is once again bringing his A-game, getting a downright Hannibal Lecter vibe in his condescending, barbed attitude toward his new would-be allies.  We also get treated to lots of brief moments of battles that suggest a much grander scale than the first Thor movie, and more world-traversing, too, with fights set throughout the Nine Realms.

I’m very happy by what we’ve seen so far– I’m stoked to see Natalie Portman back, since I still believe she and Chris Hemsworth have more on screen chemistry than any other Marvel movie romance… and I’m equally glad Idris Elba gets to drop that silly helmet for a little bit when he returns as Heimdall.

If there’s one thing the new trailer is lacking, it’s a clear definition of the Dark Elves who serve as the bad guys this time out.  We see a few glimpses, and Christopher Eccleston’s Malekith loomed heavily over the poster released last week… but if the good guys are teaming up with a villain like Loki to face this new threat… I think they need to prove the villains mean business.

I guess there will be plenty of time for that between now and November.  And while the villains seem to stay vague in this new trailer, the heroes and allies of the movie really stand out, and that’s definitely a good thing.  Check out the latest trailer below: