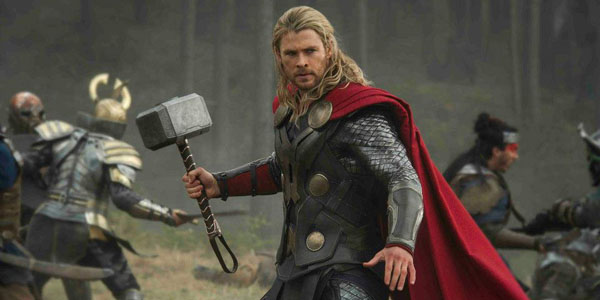 The first teaser trailer for the new Thor movie promises a bigger scope, more fantasy, and no SHIELD interference.

I think I’m in the minority when I say I really like the first Thor movie. Yes, it’s got enough flaws to establish it will never be the number one Marvel movie, but Chris Hemsworth and Tom Hiddleston are perfect as godly brothers Thor and Loki, Hemsworth has great chemistry with Natalie Portman’s Jane Foster, and at its core, the mystical realm of Asgard is packed with as much cinematic potential as the space faring Guardians of the Galaxy.

Sadly the first movie was roped down with continuity building for the benefit of The Avengers, but Marvel has long promised Thor: The Dark World would be a much more stand alone adventure for the God of Thunder.  And it looks like one hell of an adventure!  Based on this mere few minutes, we’re seeing some major devastation on both Earth and Asgard… and the hint that we’ll finally be seeing some real, epic fantasy battles on Asgard (the first movie squanders its biggest battle scenes in the first act).

We already know Hemsworth and Portman will have a good spark together, and I’m looking forward to seeing Sif and the Warriors Three once more.  I like that this first trailer doesn’t rush us in too much– we barely see Christopher Eccleston’s Dark Elf Malekith, and I see no signs of Algrim or Kurse.  Instead we get a build to Loki’s big reveal– going full on Hannibal Lecter in his prison cell– which is a great scene.  Loki’s had just enough screen time, and done just the right amount of bad shit for him siding with the heroes to feel like a legit “desperate times call for desperate measures” circumstance, and Thor’s gritty words to his brother are delivered with the perfect mix of gravitas and comic book flair.

One of the major elements of Marvel’s “Phase Two” will deal with the heroes’ evolution past The Avengers.  I like that what happened in that movie seems to have had little impact on Thor– he already knows about epic battles, aliens and everything else that shook Tony Stark– but I’m curious what echoes of those events will have an impression on the Thunder God. I’m certainly excited to find out!