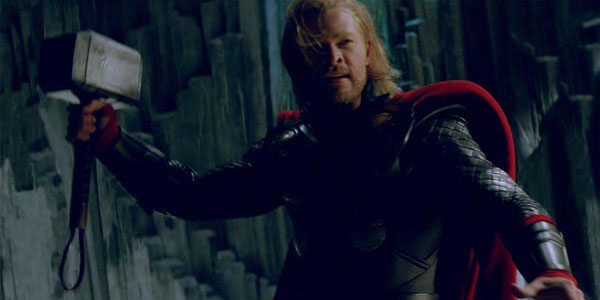 The Summer movie season officially kicks off this Friday with THOR, the latest super hero blockbuster based on the Marvel Comics hero! Thor was awesome (check out our review here!), and it follows the path set by Iron Man and The Incredible Hulk, building toward next Summer’s The Avengers, which will unite all the heroes together! We had the chance to interview the cast of Thor and director Kenneth Branagh before the premiere in Hollywood– so let’s jump right in with the star of the show, Chris Hemsworth!

Chris Hemsworth is amazing the star of Thor, playing the titular God of Thunder. He’s teeming with charisma, on screen and off, and this movie’s going to catapult him onto the a-list! Here’s what he had to say when we sat down with him:

Bill: It’s definitely a big week for you, because not only is Thor coming out this Friday, but on top of that, I heard Cabin in the Woods just got picked up?

Chris Hemsworth: It did, I’ve heard the same thing, that Lionsgate will be taking care of it now. It’s very exciting because we shot that before Thor actually, and it’s been caught up in its own sort of business but now it’s coming out, which people are pleased to hear.

Bill: Definitely! I haven’t seen it yet, but from what I hear that was originally the movie that was going to be the star-maker for you.

Chris: Yeah (laughs) Thank you! It’s kind of a Benjamin Button effect, it’ll come out when Thor is out, so I’ll get younger as the next film [comes out], and then Red Dawn, which we shot years ago.

Bill: Nice. One thing I really had to know, with this movie, Thor was great– fantastic movie– but what’s the bigger ego trip, playing a super hero, or playing a god?

Chris: (laughs) They’re both kind of interesting, to get involved in. The trick for us was to try and justify that ego in some way, and work out the truth behind it, where did it come from… I think his motivation is he’s born into this success, this kingdom and he’s the prince of the universe. That’s certainly going to play with anyone’s sense of ego.

Bill: Absolutely. I know The Avengers has started shooting, have you done any film for that yet?

Chris: No, I start shooting in about a week or so. The rest of the guys are down there in Albequerque, I’m looking forward to getting on board.

Bill: You were on stage at Comic Con last Summer along with the guys, how’s it been meeting with Robert Downey and Chris Evans?

Chris: It’s great, we’re all really excited. They’re actors I’ve watched for years, and I’m really looking forward to not only getting on set with them, but also the characters they’re playing– Iron Man, Captain America, Hulk… I think it should be pretty iconic.

Bill: Cool! Between Thor now and a couple of years ago, you played James Kirk’s dad in the Star Trek remake… is it a coincidence, or do you dig doing these kind of nerd/ genre sort of movies?

Chris: (laughs) I’m a nerd, that’s right! You know, I love big epic fantasy stuff, especially ones that have a good, sort of truthful story or some heart to it. And I feel very lucky to be a part of them. You know, I audition for many different things, and those were the ones I got picked for so it hasn’t totally been up to me, in the decision making.

Bill: You were great in both of them, especially in Thor. A lot of people who see this are gonna ask, so I’m just gonna ask the question you’ll probably answer a million times today: how do you get into the “godlike” physique that you’re in, in the movie?

Chris: You get a good costume, and you also hit the gym, and eat a lot of protein. Very clean, strict diet, which is rather boring, and exhausting over six months, but I looked at the comics and the character was huge so I had to make an effort.

Bill: What’s it like to go into a store and see your face all over the place? Some people like Iron Man or Spider-Man at least have masks, but with Thor, there’s toys and stuff, and it’s just you, like three inches tall?

Chris: It’s kind of strange, whether it be the toys or the billboards and things, every time you see them there’s a sort of “oh my God” moment– what is that?? (laughs) And it’s very surreal and you have a bit of a laugh about it. I think having a sense of humor with it all is important. It doesn’t really make me feel any different about myself, but my friends certainly find it funny, that’s for sure!

Bill: Thanks a lot for sitting down with us! Once again, the movie was fantastic, and I think it’s gonna find a huge audience.

Chris: Absolutely! I hope so, thanks very much!