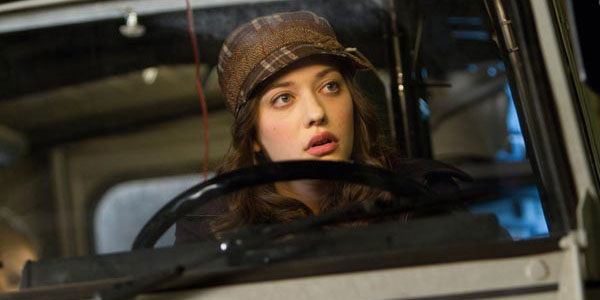 Not everybody in Thor is a mythic God, what’s great about the story is Thor getting grounded in the “real world” as well. This is where he meets Jane Foster (Natalie Portman) and Jane’s assistant Darcy Lewis, played by the delightful Kat Dennings. Kat talked about what it was like to join the Marvel Universe… and mishaps with her taser scene. Check out the full interview…

Bill: We just saw the movie last night, and it was awesome– it was really good.

Bill: I’ve been a big fan of you for quite a while, you’ve done some great work– I absolutely loved you in Nick and Nora’s Infinite Playlist…

Bill: What did you find different about doing a movie of this scale, because a lot of your other stuff has been smaller scale, more reality-based, and Thor is this huge fantasy epic?

Kat: I’m just lucky they hired me, I still can’t believe it! I always wanted to be in a Marvel movie, and Thor is kind of the ultimate super hero, because he’s not even just a super hero, he’s a god. If you’re gonna do a big one, do this one– do Thor! I’m blown away by the movie, and I knew it was gonna be good, but it was incredible! I was blown away when I saw it.

Bill: Nice! Was it cool to work with Kenneth Branagh directing?

Kat: Yeah, he’s an acting saint! He’s someone I always wanted to work with, and I didn’t think I ever would. I can’t believe it– the more I think about it– I’m so lucky!

Bill: Your character Darcy provides some awesome scenes of comic relief, what’s it like to be the funny character when you’re opposite people like Stellan Skarsgard and Natalie Portman?

Kat: Really fun, actually, because I, unlike everybody else, didn’t have to keep a straight face, and I could sort of say what I was thinking. Darcy’s kind of speaking for the audience, because if a huge, gorgeous dude in a cape comes up to you, you’re gonna be like “Oh my God! Who are you??” and I’m the person who gets to say that, so it’s lots of fun.

Bill: Darcy was hilarious, but she also did, like you said, ground the story really well. Were you bummed you didn’t get to interact with the fantasy/ Asgard side of things?

Kat: Yeah, I wish I could, but they were so sweet to me– they gave me tours of the Frost Giant sets and I got to see all the cool costumes… but yeah, maybe in the future, Darcy can go to Asgard, that would be hilarious! (laughs)

Bill: Fingers crossed, hopefully there will be a sequel, because it definitely deserves it, this thing’s gonna be a hit. It’s gonna be huge.

Kat: Whoa, well at least it’s [The Avengers] like a supplement to this, and then you get to see everybody together– that’s really exciting!

Bill: One thing I’ve really gotta know– in real life, do you think you’d have the guts to taser a god?

Kat: Uh, yes!! Because I tased myself on set by accident!!

Bill: No kidding! So it was a real taser?

Kat: It was a real taser, and we were filming an insert on the last day, of my hands tasing Thor, and it bounced off– my aim is just really good– and it hit me.

(laughs) So… yes!! I’ve been through it, so I can definitely tase anyone!!