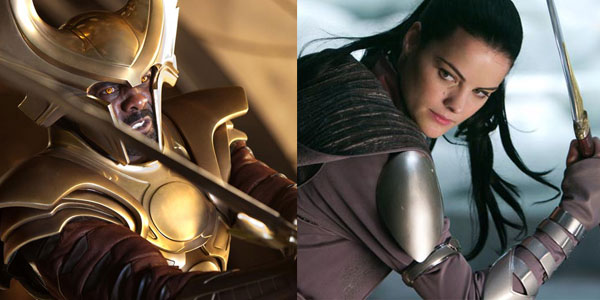 It takes a certain kind of badass to play the strongest female warrior or the gatekeeper of Thor’s homeland of Asgard, but both Jaimie Alexander and Idris Elba are certainly up to the challenge as the mythic warriors Sif and Heimdall. We sat down with both of them, to talk about the new movie, what it’s like to be an action figure and more!

Bill: Jaimie, your character Sif is a lot more action-oriented than some of the other characters you’ve played in the past. What’s different about training for a role, and doing a role that’s a warrior, instead of somebody more normal?

Jaimie Alexander: The training was a lot of lifting weights, running, stunt training, and making sure I was flexible so I didn’t break myself in half… but I loved it, and it’s such a big part of Sif, the physicality, so it was a lot of fun to get in shape for it.

Bill: Idris, your character, Heimdall, has a really distinct look, with the armor, and the glowing eyes and everything… was it easy to act in a really elaborate costume like that?

Idris: No, that helmet was HEAVY! (laughs) The sword was heavy, and it was 45 minutes to an hour to get the armor on, and once you’re in it, that was it, so it was really restrictive. My character doesn’t really emote, you don’t see him moving too much, he’s just really still, so I didn’t have to do much underneath that armor. The eyes were contact lenses which we designed, because my character can see all things and hear all things, so we wanted to do something with the eyes to make that bigger.

Bill: Yeah! Heimdall had my absolute favorite shot in the movie, where he’s standing on the rainbow bridge, overlooking the stars and the cosmos, I was like “wow, that is a great shot!”

Idris: The special effects in this film were amazing! (to Jaimie) Your fight sequence with the Frost Giants was wicked.

Jaimie: Yeah, it was a lot of fun!

Bill: How did you both come to your roles? Were you fans of the comics, or was it just something that came up?

Jaimie: I’m definitely a comic book fan. I didn’t know the whole story about Thor, so I had to go back and revisit it, but I auditioned, and my tape was sent to Kenneth in Sweden, awe had a Skype conversation, and I got the role… (to Idris) Unlike Mr. Elba over here!

Idris: (laughs) Kenneth gave me a phone call– I was at my house chilling– the phone rings and it’s Kenneth Branagh! I love Kenneth Branagh as an actor and a director, so I had a meeting with him and he told me about the role, and that’s how I got the job.

Bill: Well, it was nice to see you as a good guy role in the movie. I’m used to seeing you from The Office still, as the villainous Charles Miner–

Idris: No, no! Everyone got my character wrong on The Office, he was a good guy, he was a union guy– Charles Miner, a real worker!

Bill: Yeah, he seems a little by-the-book, and it doesn’t really synch with weirdo’s like Michael Scott, I guess. (Laughs)

What’s it like, having an action figure of yourself?

Jaimie: Oh my gosh, it’s awesome! I have four brothers back in Texas, so they’re pretty excited about it. And I have a mini-me now!

Idris: I haven’t even seen mine!

Jaimie: (to Idris) Yours is pretty epic, it’s awesome!

Idris: I have to go see that!