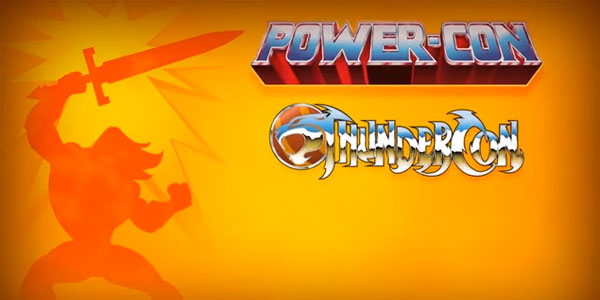 Power Con had a menagerie of new characters. Unfortunately, not being there gives one a perspective not found with the in-crowd seeing each new discovery with rose-colored glasses. I do enjoy the Masters of the Universe line as a whole, but I have come to the realization that the toys will never come out the way the Four Horsemen had intended. While I do love what was revealed, I do have some initial misgivings on the reveals– I will say it is not love at first sight, but rather cautious optimism.

First let’s address the elephant in the room: Castle Grayskull will be up for metered pre-order! This is amazing news! The only caveat is that they stated that if every sub buyer buys the castle, then they are already set for production. However there are those like myself that bought extra subs in the interest of saving the line. I do love this line, but I do not need 4 Castle Grayskulls. In addition, many don’t have the space or the funds for such an expensive piece. One can only hope online retailers and the cherry-pickers come out in force to help us get this essential piece in the line in production for Fall 2013. 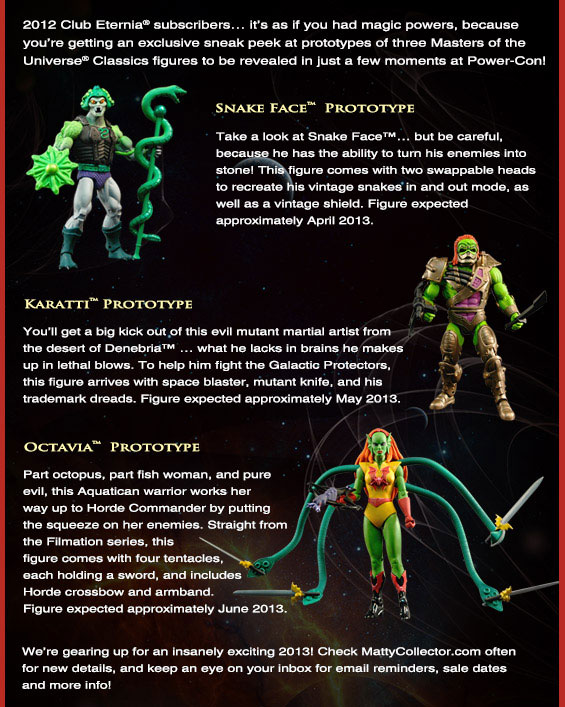 On to the figures. Snake Face is the newest member of the Snake Men faction seeing representation in MOTUC, sadly even eclipsing the New Adventures characters be way of releases. He does have all the essentials in gear– the signature snake staff, his snake shield (though somewhat smaller than many had anticipated, albeit highly-detailed), snake torso armor that spills forward along with his snake-striking alternate head to petrify any foe foolish enough to gaze too closely! There is a nice green wash over his slate arms. I am not sure about the one-piece torso armor, if it’s molded, or if it’s just another plastic overlay over a base buck. I don’t see too much room for error, but I will be watching the orientation of the snakes winding up his forearms for potential swapping. Because if I don’t catch it now, it will be “my fault” when it winds up in my hands.

Secondly, Karatti joins the Evil Mutants to overwhelm the lone Flipshot. He does look pretty fantastic, and his asymmetrical body armor, braided head, green skin, and signature gun and knife are brilliant updates to the original. As nice as he is, I do worry that they went to the Trap Jaw well one too many times. Even now I find myself searching for a way to give the New Adventures new base legs, maybe slimmer ones that would allow to give uniquely tooled wrapping (thigh guards and shin guards at least) for all the New Adventures characters. As he is, I understand the strategy of integrating the New Adventures characters, but maybe it’s time for some additions to the New Adventures tool bank.

Lastly, Horde Sea Captain Octavia joins the ranks with a first-ever action figure rendition. She looks very Filmation, and I have yet to figure out if that’s a good thing or not. I know I don’t enjoy the lack of custom detail– her gloves have no ornate detailing and her skin lacks the scaly texture I could envision being reused for Scorpia. I can only hope the female pelvis is finally fixed. But her pluses do outweigh the minuses. Her entire body could easily be repainted for a Horde Force Captain Adora variant. The Horde symbols on her tunic and boots add much-needed detail, and she is one of the few characters accessorized to the teeth. She appears to have ball-jointed tentacles, and I hope they are bendy like King Hssss, and each one can hold a sword (she has four thus far!) Each sword was fabricated to have Horde symbols on the hilts; an amazing touch, and the face sculpt is spectacular. She joins her male compatriots as the first Hordewoman with a crossbow. With the addition of a Horde armband, I can’t wait to see how all this will fit into the box!

I enjoyed what I saw but sadly, that moment is so fleeting these days. In the same event giving us so much to look forward to, the reality of Frosta’s swapped forearms (after two delays nonetheless), black plastic base bucks, and other questionable design choices, remind us that anything can happen once it makes it through the factory filter. For now, I will be watching the toys’ progress from show to show, and remind myself that 2013 is giving us a spectacular mix of much-needed characters from Filmation and New Adventures, and I hope more is to come for this year. My only desire is that this 2013 gives us more “Power” and less “Con”.