First Thoughts- Once Upon a Time in Wonderland 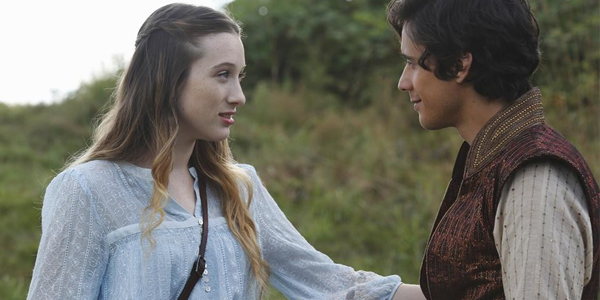 Alice in her classic blue and white dress comes home after spending time in wonderland, to find a family who thinks she is insane she travels back to wonderland to prove she is not insane, but in her time there she grows up and meets Cyrus the genie from Aladdin fame. They fall in love but the red queen has it I for the the young couple, and kills him, or so it seems. Behind the scenes Jafar is pulling the strings for something we don’t yet know. Alice returns home grown, and is thrown into and asylum. But the Red Queen needs her and send the Rabbit to save her. He enlists the Knave of Hearts to help him keeping him in the dark about the true plan.

The Knave and Alice set off to find Cyrus, but all they find is am empty Mad Hatter house and Cyrus’s heart pendent. It gives Alice hope, but Jafar is revealed to be playing everyone against each other.

In the second episode the audience is given the back story on Cyrus and Alice’s first meeting how they fell in love. Jafar is looking for the lamp, and a citizen of Agrabah has the lamp but to keep it away from Jafar, he wishes to the ends of the earth, which sends it to Wonderland and Alice. Although Alice has her wishes she decides not to use them freeing Cyrus in a way from his lamp. Until she uses them no one can take over and become a new master to Cyrus.

The show mixes the worlds of Alice and Aladdin but in some ways it seems forced. The main show, does a much better job mixing the fairy tales the coming together of these two worlds seems forced in someways. It does not flow as well as other mediums have done like Fables. The other issue that may take viewers out the story is everything is set in Wonderland, there is no real world like in Once Upon a Time. The CGI look of the whole show can be jarring at times. Judgement is still out on the show, but unless this show blends worlds much better it may not make it to season two.