Titanfall is the First Must-Buy Game for XBox One 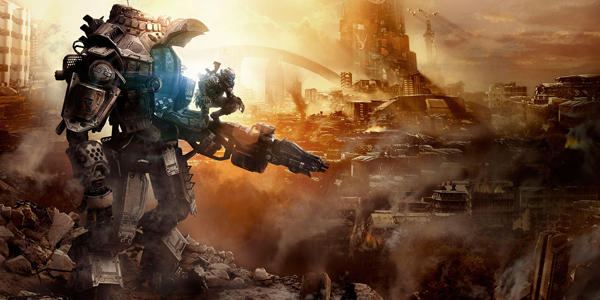 Respawn Entertainment, a studio founded by the developers who breathed new life into the Call of Duty franchise, has finally released its long-awaited, much-lauded, multiplayer-only title, Titanfall.  While it doesn’t necessarily reinvent the shooter genre, it’s been a while since a shooter has been executed so flawlessly.

Upon starting the game for the first time, players are greeted with a bland but informative set of tutorial challenges, which show off the skills their pilots possess.  What immediately stood out was the tremendous sense of speed and momentum that you feel racing around the environment.  Where sprinting in most first-person shooters is limited to a few seconds, it is unlimited in Titanfall, and substantially faster than I was expecting.  Coupled with jump jets for mid-air boosts, the ability to grip to and run across walls, and the fact that pilots can grip onto ledges to hoist themselves up and there is no part of the battlefield that isn’t easily accessible to you.  Going back to Battlefield 4 after a prolonged session in Titanfall was almost painful.  Soldiers seem to move as if plodding through wet sand and the entire experience, which I had been enjoying so recently, felt sluggish and dull. 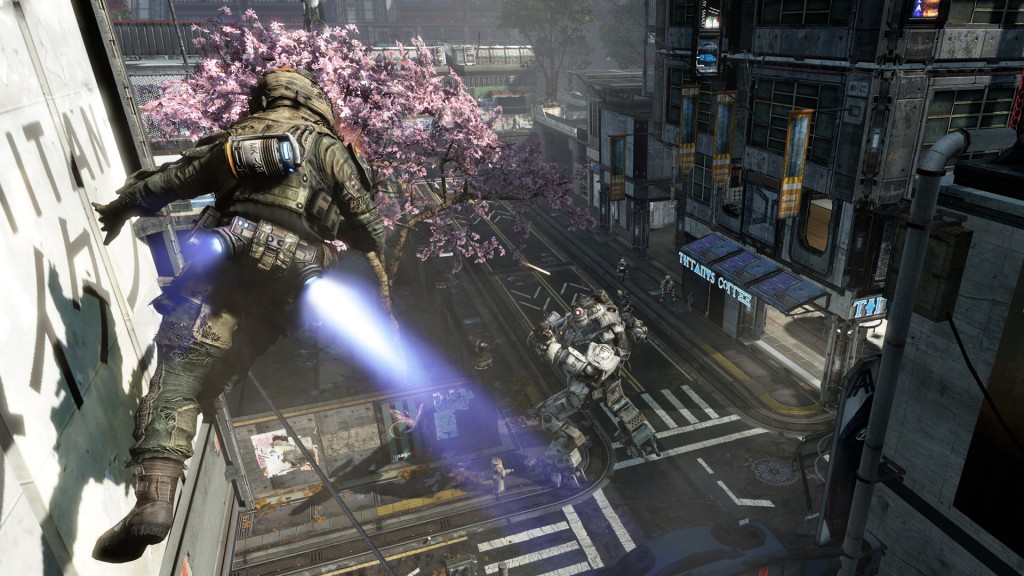 While the first half of the tutorial focuses on your pilot’s mobility, the second half gives you a taste of Titan combat in simulated scenarios.  The first time you initiate a titular Titanfall, the act of calling in your hulking mechanical exoskeleton and watching it crash to earth in front of you, it’s truly a sight to behold.  Upon touching down, your Titan will be enveloped in a protective shield for several seconds, giving you time to run over and climb into the cockpit.  Once inside, pilots are free you use the Titan’s powerful weaponry, their ordinance of rockets, and even their assignable special abilities (you start with a Vortex Shield that stops incoming projectiles and fires them back at the shooter, much like the “Return to Sender” vigor in Bioshock Infinite).  You can’t jump while inside a Titan, but they are still quite agile and able to use up to three boosts in quick succession (depending which chassis you are in) which allow them to dash quickly in one direction to cover ground or avoid incoming fire. 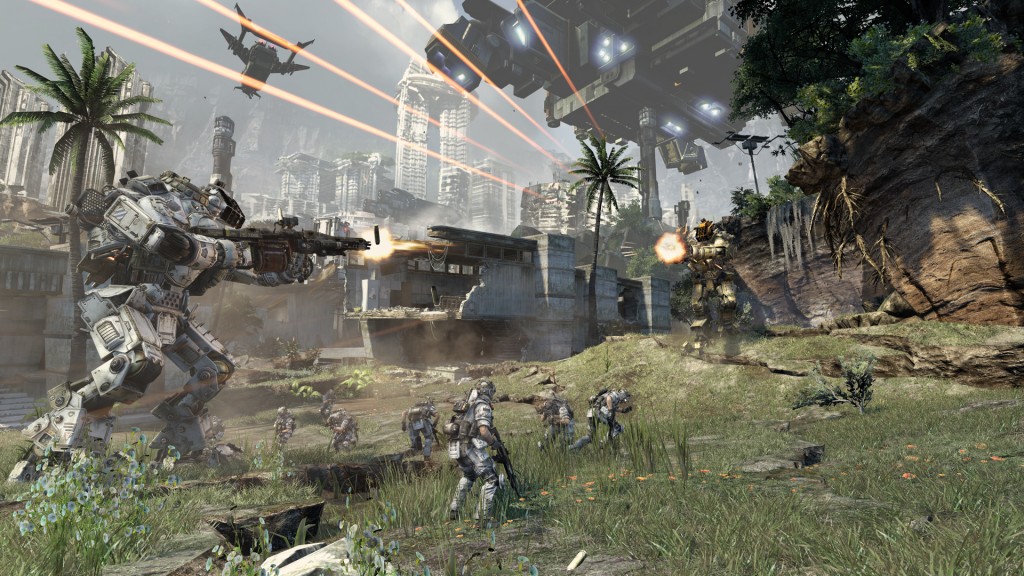 Once the training levels are concluded, you’ll be presented with the option to play the “campaign” or “classic” version of the game, however they’re both basically the same thing.  While the classic mode allows you to get into a multiplayer gametype of your choice, the campaign mode is a set of Hardpoint and Attrition matches which tries to provide a bit of background story regarding the struggles to the game’s two warring factions.  Really though, a thirty second explanation of why our team needs to hold three control points and a slightly extended deployment sequence doesn’t make a campaign.  There’s really no real narrative to speak of and no memorable characters – simply a string of connected multiplayer battles.  When you think about it though, other franchises like Call of Duty and Battlefield that feature fully thought out single-player campaign experiences continually miss the mark and fail to deliver any kind of engaging storyline or characters for their entire duration.  Titanfall clearly knows what it is and what it strives to be, and it’s hard to fault them for focusing solely on a stellar multiplayer experience.  Still, unlike the other licenses I mentioned, the universe that Respawn created here is intriguing enough that players will want to know more about it.  The campaign presented here is nothing more than a tease at something more interesting but the compelling multiplayer offerings are thankfully enough to offset the non-existent plot. 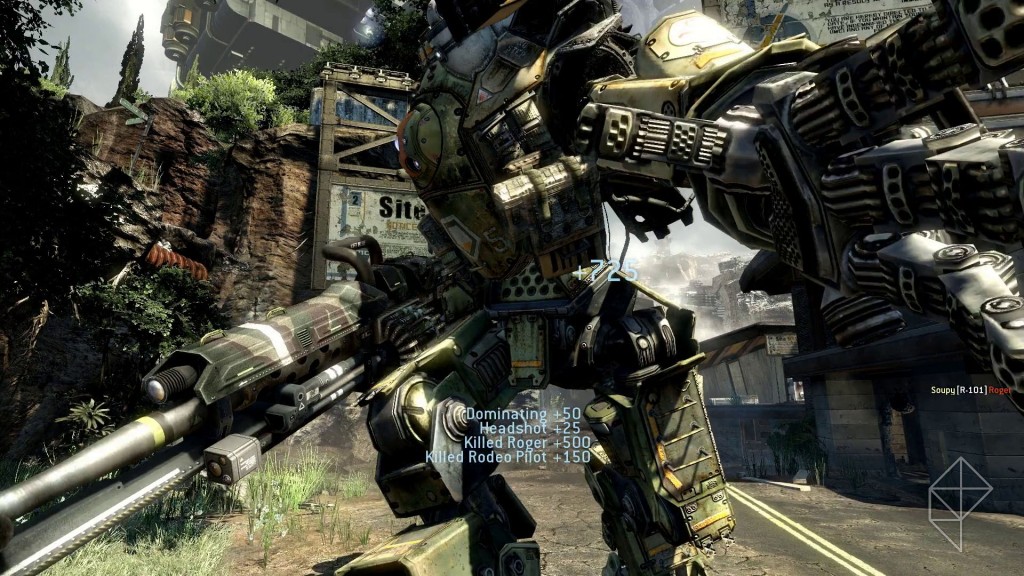 The maps presented in Titanfall are all roughly the same size and scope and are rather well designed to handle the task of accommodating both free-running pilots and huge mech battlesuits.  This is accomplished by using large outdoor areas and scores of small multi-level structures.  Each area feels expansive in its own right with no choke points or bottle necks – every level is clearly built to be traversed easily and to promote fast-paced combat in the open.  I wasn’t sure how I would enjoy the limited 6v6 matches, but it feels right in practice.  In fact, the inclusion of AI bots ensures that there is always opposition to contend with.  One of my biggest pet peeves in multiplayer shooters can be the lack of things to shoot, coupled with numerous quick, unsatisfying deaths.  Titanfall completely reworks the standard model by constantly spawning weak AI grunts onto the maps.  Drop pods will fall from the sky and you will see soldiers emerge to run around and take pot shots at your team.  These grunts are rarely a threat and are easily dispatched but serve a couple important roles.  First, they help create the illusion of a much bigger war and give an epic feel to each match, ensuring that players are always engaged and not simply running around for several minutes hunting looking for opponents.  Second, each kill shaves a tiny bit of time off the deployment of your Titan.  A short time after each match begins, a clock will count down from two-minutes but this can be sped up by killing enemies.  Grunts will award smaller bonuses than killing the pilots of other players (who are significantly more challenging to take down) but worth mowing through them for the experience points alone. 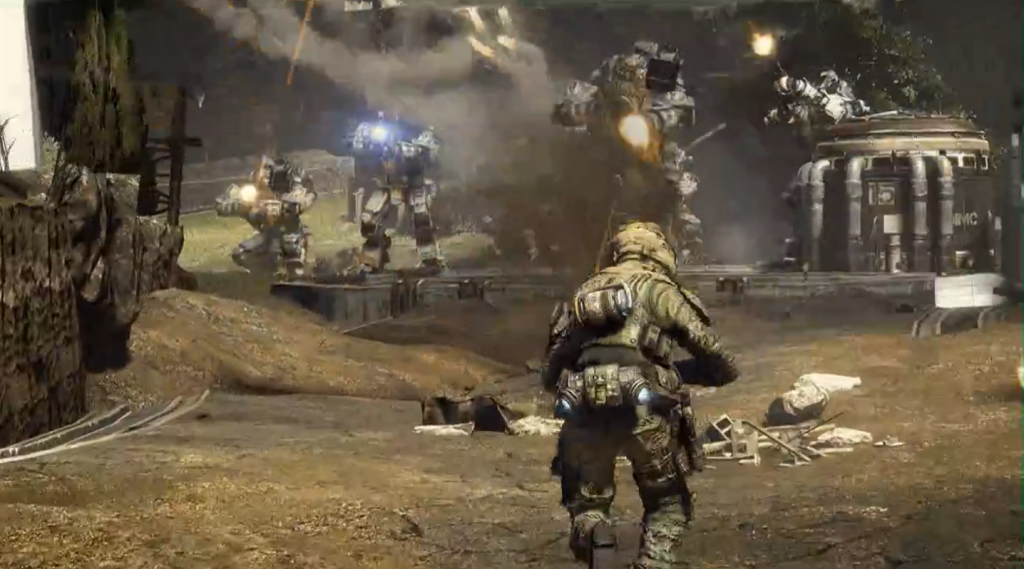 The fact that there are less human adversaries on any given map also allows for relatively safe spawning.  I can’t say I’ve gotten stuck in any loops of spawning in and being instantly killed by a sniper or other unseen, presumably camping, enemy.  Actually, you’ll a whole lot less in general as the interaction here is just different in a very positive, refreshing way.  Even if you get killed by every other human opponent you encounter, the fact that even the poorest performing players will be able to kill game-controlled bots and earn their time in a massive Titan is nice to know.  It’s also impressive that controlling both the pilots and Titans is equally fun in its own way.  I had thought while watching the announcement trailers that running around on foot would just be a necessary, albeit boring way to pass the time before you can climb in a Titan and tear up the place, but that’s really not the case.  In many instances, players may wish to refrain from climbing into their mech suit or simply not call on it altogether.  While the Titans provide unparalleled firepower and armor, they also paint a large target on you and it won’t be long before a combined assault will critically damage it, causing you to eject in a spectacular fashion.  Fortunately, you can actually order your Titan to go into auto-pilot and either follow you around or guard a location.

The arsenal and special abilities for both pilots and Titans is unlocked via earning XP and increasing your level while Burn Cards are earned by completing challenges.  Neither of these features are quite as robust as the upgradable weapons and perks found in many other shooters, but plentiful enough to give players a solid array of options.  The Burn Cards are rather interesting as they’re one-use bonuses that can be activated at the beginning of a round and when respawning, and are active only during that one life.  They offer semi-useful perks like wielding a more powerful, auto-targeting Smart Pistol or having slightly increased speed, but you can sometimes get killed before ever being able to use them – and then they’re gone forever.  Fortunately, the game throws new ones your way fairly often and there’s a limit to how many you can hold, encouraging players to use them frequently.  They’re a fun addition and don’t seem so powerful that they ever give a true battlefield advantage.  I also love that they are presented like actual collectible cards on the assignment screen (you can equip up to three burn cards to bring into each match). 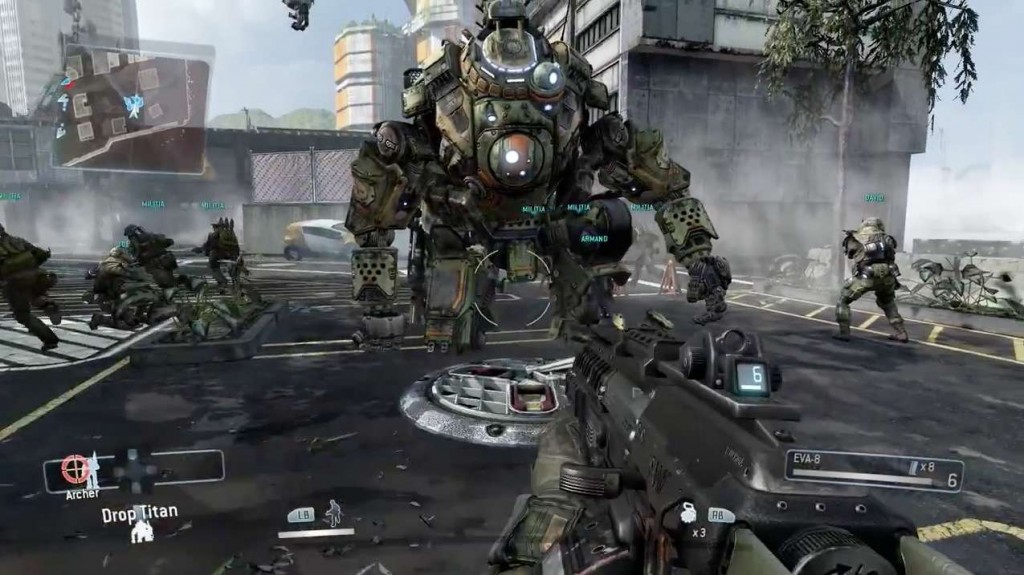 If there’s any opportunity for improvement here, it would fall in the lack of variety in the multiplayer modes.  For a title that is unapologetically multiplayer-only, there are only a handful of modes and most are very similar.  Sure, most people will stick to the area-control, domination-style Hardpoint, the deathmatch-based Attrition, or the old favorite, Capture the Flag, I’m sure the developers could have thought up some creative new modes to complement their innovative achievement here.  I will say that Titanfall offers one of the greatest Capture the Flag modes I can remember.  The fact that pilots can order their Titans to guard flags while making a run across walls and over obstacles to infiltrate their opponent’s base is pretty spectacular.

With DLC already announced, I’m sure new modes and unlockable items will be added and there is apparently a patch in the works to “fix” the resolution.  I can’t say that I have any problems with the visuals though – it’s not the most visually impressive game I’ve seen so far this generation but it still looks amazing and certainly nothing to complain about.  If they do up the resolution through future patches, it would only be the icing on the cake.  The bottom line is, Titanfall is a tremendous amount of fun and the developers at Respawn Entertainment have delivered one of the most exciting and creative shooters in years.  Even without the lore and a proper back story, the game still stands on its own as a truly must-have title for the Xbox One.