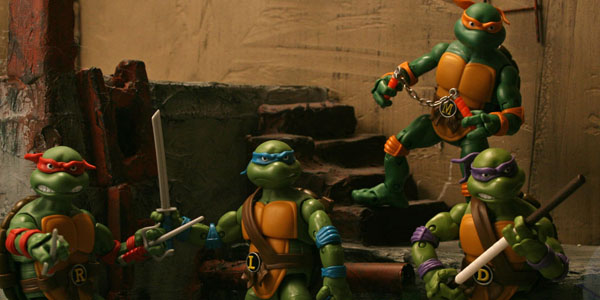 As part of Playmates’ relaunch of Teenage Mutant Ninja Turtles, the company has released not only an all-new line of pretty awesome 5″ figures, but a side series featuring 7″ versions of the Turtles in their classic 80’s cartoon looks.  Called TMNT Classics, this line sees Playmates take a page from other recent toy lines line Mattel’s Masters of the Universe and Bandai’s Thundercats, delivering some wonderfully engineered and highly articulated– but still totally oldschool– heroes on the half shell.
Unlike the more stylized modern figures, the TMNT classics see all four brothers share the same body, but with unique headsculpts, belts and, of course, their signature weapons. Each turtles features a different skin tone and colored bandanas and elbow and knee pads that match the original figures released in ’88.  The headsculpts on all four look great, as if they were pulled directly out of a VHS tape of the cartoon show, and the big eyes and agape mouths do a good job of packing quite a bit of personality into each mutant.

The TMNT Classics are quite impressive, however there’s definitely some positives and negatives to them.  Let’s start with what works: 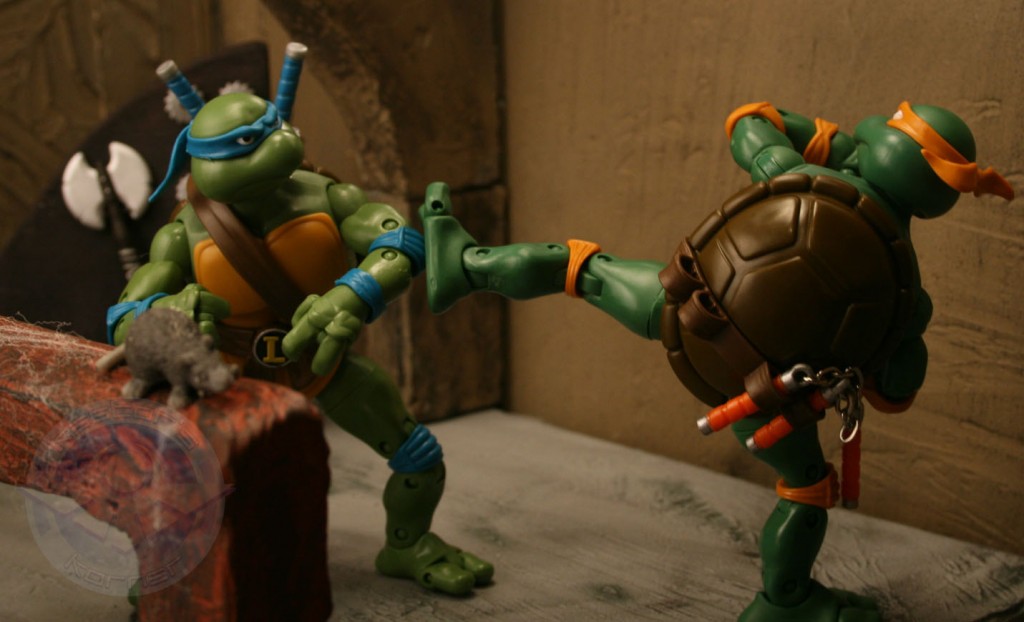 The new body created for these Turtles is absolutely fantastic. I thought the articulation was great on the modern era Turtles, but from an engineering perspective, those don’t even hold a candle to the Classics’ design. We get a ball jointed head, ball shoulders and hips, double knees and elbows, ball wrists (hidden wonderfully by the wristbands), socket ankles, hinged fingers and toes and a very nice ab crunch.  Boasting a total of 34 points of articulation may seem very mid-2000’s, but what impressed me the most about the Turtles is each moving part has a purpose. The hinged fingers almost turned me off from buying these figures– I had bad flashbacks about otherwise great toys like Marvel Legends, inhibited by hinged fingers that couldn’t grip their accessories. However the Turtles’ fingers hold firmly in place, and the inclusion of a hinger and swivelling thumb helps them grip their gear very tightly.  I had no idea how an ab crunch would work, considering the TMNT’s inhibiting shells, but not only does this joint lend itself to lots of dynamic ninja poses, it works with the solid shell as a coverall, making any hunch or arch look perfectly natural (well, natural for an anthropomorphic turtle, anyway).

While all the joints are sturdy, the brothers each include a sewer cover stand which look great on display and help support them in many poses. Aside from the bases, each figure includes his respective weapon, all of which are fully painted and look great. I’m especially happy to see Mikey’s nunchuku with an actual chain instead of molded plastic, and the fact that this version of Raph can hold his sai either by the handles or in the traditional between-the-fingers pose is a great touch.

I wish I could give these figures a complete pass, but there’s a few drawbacks to them, in spite of the cool retro look and brilliant design work. The main strike for me, personally, is the headsculpts chosen for each brother. While they are well-sculpted and full of personality, some of the faces don’t seem to fit the personalities of the characters, especially their 80’s cartoon versions. Mikey’s serious eyes and closed mouth look like they’d be better suited for the determined Leo rather than the Turtles’ resident party animal, and the hot-headed Raph may have received the most neutral portrait of the bunch, a far cry from his typical angry demeanor.

The Turtles’ arms and legs also look too slim compared to the heads and bodies as well, which takes away from the stocky look of the ninja teens of the cartoon. In the package the figures’ proportions looked way more wonky– like humans wearing Turtle costumes– but it’s still noticeable even when they’re posed on display.

The biggest killer here, and a haunting throwback to last year’s excellent but tragically short-lived Thundercats Classics, is the scale. Playmates went for a roughly 7″ scale for these Turtles, which really doesn’t put them in common scale with any other figures on the market (unless you count the afformentioned Thundercats).  It’s not a deal-breaker, but it’s too bad these guys didn’t clock in at a scale more like the new line, in which case the 5″ Turtles could comfortably fit in with any MOTU/ DC Universe/ Marvel Legends collection. Bandai realized they made their Classics figures too big to be compatible for many collectors’ tastes, and by the time they corrected it, they were too late. I wish Playmates had learned from the other company’s misstep and made a better scale choice for their line. The trade off is, there’s a definite heft to these figures that makes them feel totally worth the price tag… and makes them lots of fun to play with.  I think i can forgive the scale choice here as long as Playmates keeps in mind this is a collectors’ line– if we get a Shredder or Rocksteady and Bebop, they need to make them in scale with the Turtles, not the exact same height. And unlike their feline fellow 80’s cartoon stars, the TMNT line delivers all four brothers, straight out of the gate, which is a definite step up from Bandai’s two-per-wave strategy. 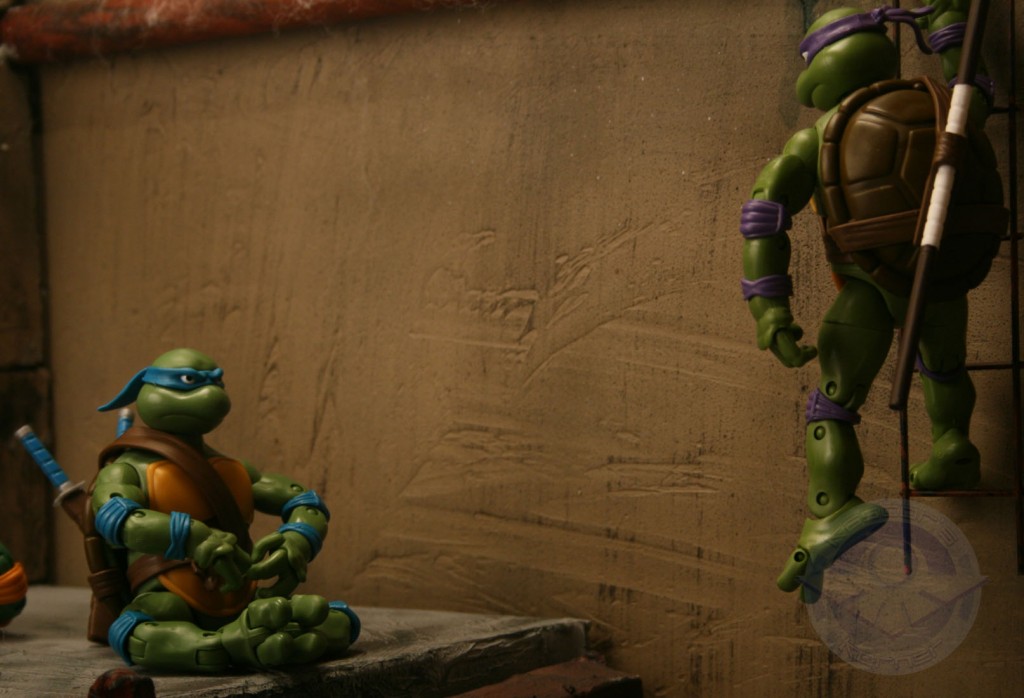 Overall the TMNT Classics are outstanding. I had decided to skip on these retro figures after I discovered how cool the Turtles from the modern line are, but I’m glad I changed my mind. The Classics line have a great throwback feel, combined with a great modern articulation structure that really works wonders for them.  Other companies have struggled with their collector-driven sub-sets, but after checking these figures out in person, I’m really hoping Playmates can play their cards right and keep this line going strong. 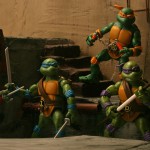 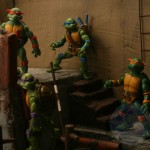 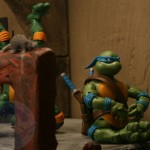 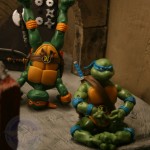 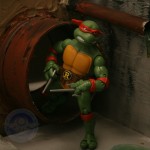 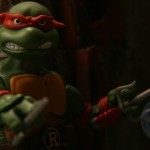