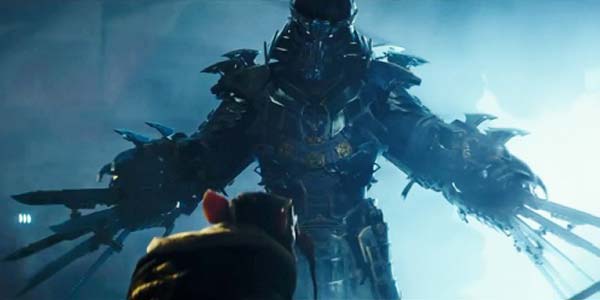 At least the Turtles aren’t the only ones suffering from over-design.

I’ve been fairly lax on covering the new Teenage Mutant Ninja Turtles movie, mostly because, quite frankly, my expectations are so low I’d likely bump into the Technodrome if I paid closer attention.  Michael Bay’s involvement– and the annoying slow-mo peppered liberally in the trailers– all but ensures the movie will be a nonsensical mess, with no developed characters or entertaining visuals.

And the Turtles look awful.  The latest photo which I saw over on Badass Digest shows off The Shredder, with his ludicrous amount of blades and knives and sharp things coming off every direction of his body.  It is– literally– the textbook definition of “more is more” over-design.

I’m a little torn in my sentiments about this movie overall, because the TMNT fan in me wants to cry foul at this movie’s busy, ugly aesthetic and the threat that the Transformers crowd is behind this movie.  But the entire Turtle empire is built off a comic book created to make fun of Frank Miller, so despite what it’s become as a mass media commodity since then, it’s hardly the most sacred of cows.

I feel more comfortable settling in as staunchly against the designs themselves.  While bad art design doesn’t necessarily make or break a film, one thing I CAN credit to the Ninja Turtles is a history of strong character design.  From the delightfully detailed Playmates toys in the 80s, the sleek and visually eye-catching reboots and some solid practical Turtles in the Jim Henson movies, TMNT has typically looked good, despite how silly the premise behind it was.

It’s not the silliness that has me hating on this Ginzu Shredder.  It’s the fact that I can’t help but think Bay and his cronies actually think this looks cool.  And I can’t imagine anything more lame than that.