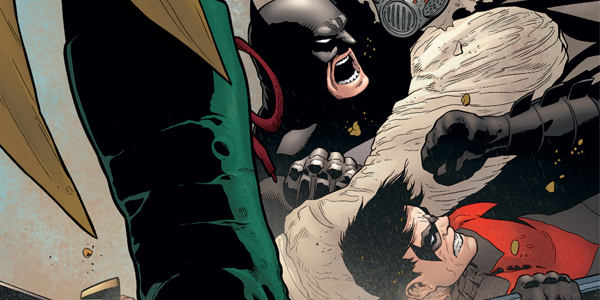 If you do not have Batman and Robin on your pull list, no matter if you love or hate the New 52, you need to add it and track down the other 22 issues.

For those of you who do not know, this book has been interesting even before Flashpoint (the turning point towards the New 52). The Batman and Robin book as taken a change in the title since the death of Damian Wayne, there have been guest stars on this book (Red Robin, Red Hood, Batgirl, Catwoman, and now Nightwing) trying to help Bruce cope with the passing of his son.

This issue did not disappoint as Alfred is once again struggling to get through to Bruce, trying to get him through yet another loss. For those of us whom remember Bruce took the death of Jason Todd horribly, remorseful about it for decades, and looking at is as his greatest failure. The writer of this book, Peter J. Tomasi, has been at the helm since the beginning of the New 52 arc and has been able to replicate if not make the hurt we seen Bruce and Alfred going through seem real. 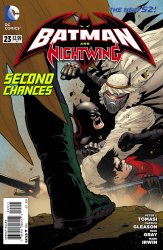 We see Bruce in the cave attached to a virtual reality machine that has run through 46 failed attempts at a way to save Damian. Just as Bruce was finishing trial 47 Nightwing was called to the cave by Alfred to talk him down. As Grayson knows all too well Batman at times will not be talked down and decides to join him in the machine and sees what he could have done as well. To see that outcome pick up the book at your local comic shop, but the pain you can see in the art by Patrick Gleason and teamed up with the words by Tomasi it’s a one-two punch of awesome! The end of the book we see Alfred as he puts himself in the machine after Batman and Nightwing walk off, and you see a scenario like a “what if” take place on the night Alfred failed to keep Damian in the cave. Alfred has placed blame on himself for Damian’s death more than Bruce has and the art and writing will bring a Bat-fan to tears when you read and see how it plays out. Also how will Bruce react when he watches the whole thing on the screen?

Batman and Nightwing #23 is in your Local Comic shop now and if they have run out ask if they can reorder it for you!