Crystal Dynamics’ Tomb Raider Reboot is a Work of Art 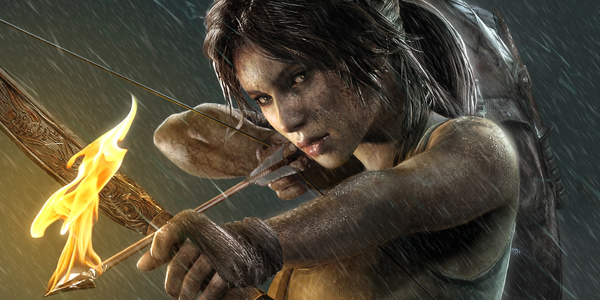 Having spawned ten games and two motion pictures, Tomb Raider is one of the most recognizable and successful video game franchises of all time.  Over the course of its seventeen-year existence, Lara Croft has zigzagged across the globe, exploring uncharted territory and finding adventure wherever she travelled.  Though the series has aged gracefully, the team at Crystal Dynamics realized that Tomb Raider was in need of a fresh coat of paint and set out to reinvent the franchise from the ground up.

The results could not have been better.  When we saw last year’s playable build of the game, we knew that they were onto something special, but the finished product absolutely blew me away in terms of both presentation and gameplay.  After a long string of overly-hyped recent releases that completely failed to deliver, the level of polish applied to Tomb Raider is a welcome sight.  The development team’s painstaking attention to detail is immediately clear as Lara regains consciousness following an edge-of-your-seat intro, which perfectly sets an ominous tone that doesn’t let up for the game’s duration.  And while the graphics don’t necessarily make the game, I honestly can’t think of the last time the visuals in the game really floored me like they do here.  If it’s any indication, my wife, who was intermittently watching me play through the game, often mistook the actual gameplay for pre-rendered cutscenes.  The lighting effects alone are the best I’ve seen on the current generation consoles.  But before I get too far into the technical aspects of the game, let’s touch on the intense experience Crystal Dynamics crafted for the reboot. 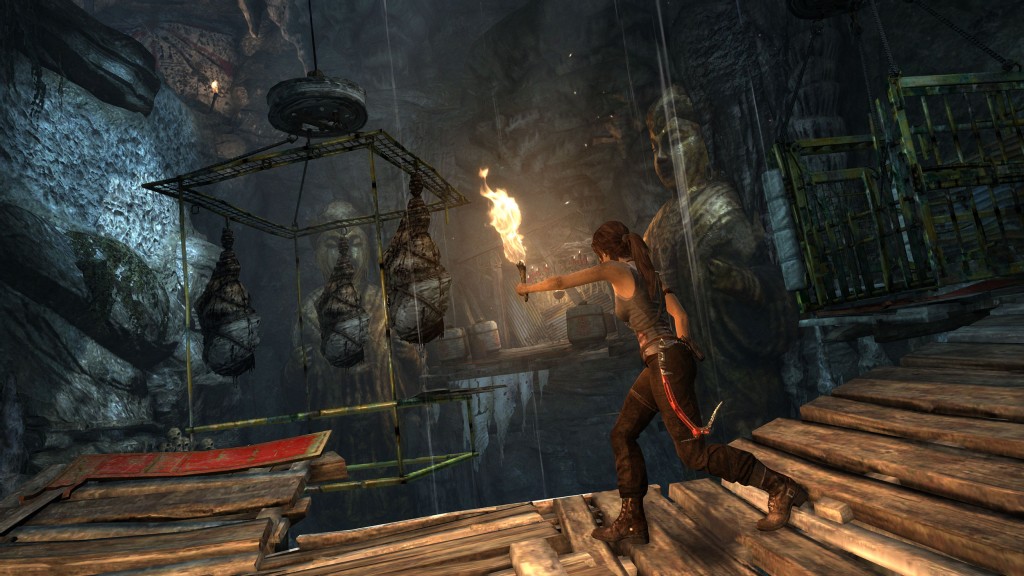 Essentially, Tomb Raider tells the story of a young Lara Croft.  Set long before all the previous games in the series, this novice explorer is following in the footsteps of her parents and, while still inexperienced, is fiercely determined to prove herself.  As she and a large crew sail in search of the lost nation of Yamatai, a devastating storm tears their ship apart.  After narrowly escaping the sinking remains of the vessel, Lara finds herself washed up on unfamiliar shores, only to be quickly knocked unconscious by an unknown assailant and strung up to rot in an underground tomb.  This is just the first small piece of the nightmare scenario that she pushes herself through in a desperate fight for survival.  The trauma she endures throughout the game’s story can be heart-wrenching, thanks in a large part to the tremendous voice-acting, fantastic visuals, and a perfectly paced narrative that really lets you connect with the characters. 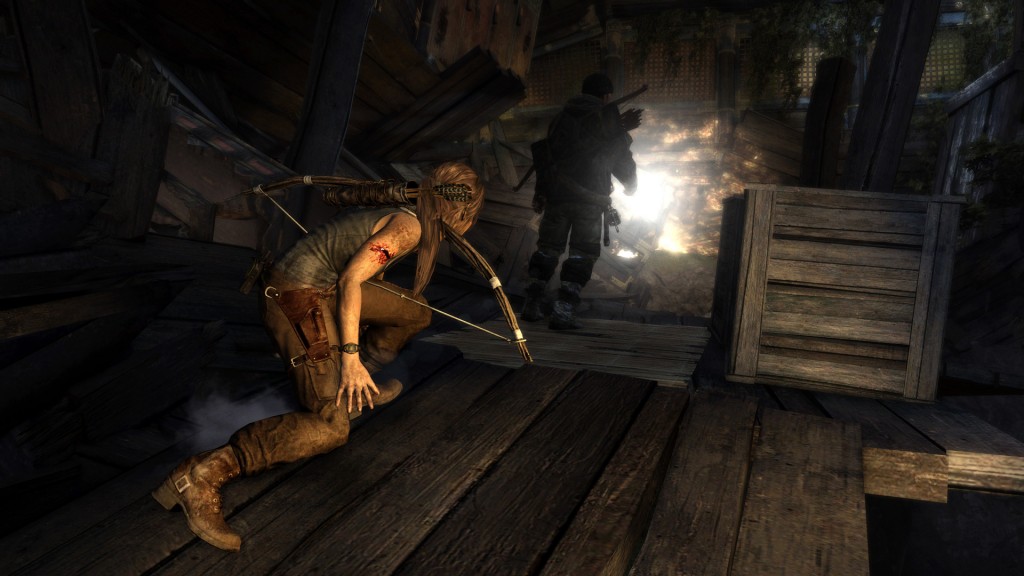 Upon making a daring escape from the aforementioned cave you find yourself in, Lara’s first act is to start a fire to ward off the cold and search for food.  After finding a makeshift bow, you are able to first use it to hunt animals in order to bring some meat back to your camp site.  Each time you set up camp in the game, you are presented with options to build new weapons out of discovered parts or upgrading existing tools using salvage you’ve found.  The system is intuitive and works extremely well, giving players an added incentive to explore their surroundings thoroughly in search of collectibles.

Although visibly shaken, she begins to get her bearings and venture off in search of any surviving crew members.  Whether navigating across the crumbling, decades-old wreckage of airplanes, descending into the depths of the earth, or scaling 300 ft high radio towers, the game constantly keeps the pressure on.  The narrative cleverly baits you with tasks that actually make sense to your continued survival and escape from the island but, once you’ve accomplished them, they dangle the carrot a little further from reach.  Something is always happening to keep you motivated and to prevent you from feeling at ease wityh your situation.  I remember last year, earlier in the game’s development, some “concerned gamers” sparked a controversy by taking statements by the executive producer regarding this tension way out of context.  Having actually waited to play the game before weighing in on such nonsense, it’s easy to understand what he was getting at.  A number of scenes throughout, including the sequence in question, are meant to evoke a “fight or flight” response – and do so very well.  Through excellent direction and very deliberate audio cues, many of the perils Lara faces come at you with such shocking force that you feel as if you are right in the character’s shoes, fighting for your life.  You feel for her struggles because she’s such a believable and, frankly, likeable character.  You can see the shock painted across her face when she witnesses the islands countless horrors and the anguish and frustration as she clenches her teeth in the face of several devastating setbacks.  Through all the tragedy and triumph, the Lara Croft presented here shows a great deal of emotional vulnerability that simply makes her appear more human than your average video game character, but without ever feeling disempowered.  …and no, there is no “attempted rape scene” or anything that can be remotely conceived as such, regardless of what you’ve heard.  That said, there is a hefty amount of graphic violence with disturbing visuals — this one isn’t as family friendly as previous entries. 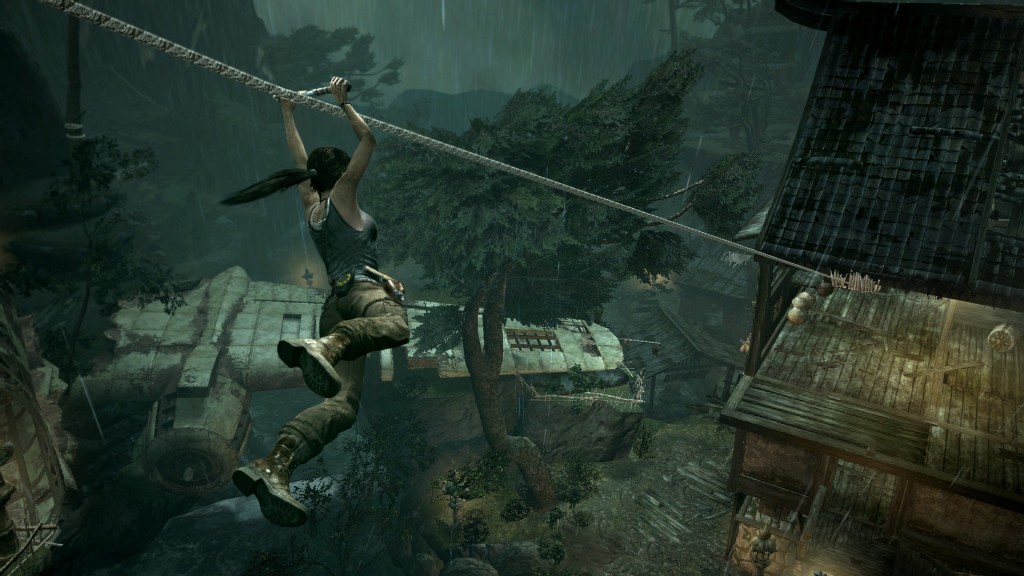 Fans of the classic Tomb Raider titles will still find plenty to enjoy here as well.  The island is open for exploration and can be traversed quickly by fast-traveling between discovered camps.  A bit of searching will uncover several optional tombs which each serve as their own mini-levels, complete with puzzles that must be solved in order to reap the treasures within.  Nearly every area in the game also hosts one or more challenges that have you searching out specific collectibles or performing a number of tasks to collect XP.  These experience points can be used to teach Lara new skills in three different categories.  For example, only a few hours into the game, I became more skilled at detecting animals around me, learned how to use a bow more effectively for greater damage potential, and honed my combat skills by discovering how to temporarily blind foes with a handful of dirt.  The tiered XP upgrade system ensures that Lara will slowly develop and learn useful skills as the story progresses.  Interesting relics are also scattered around the island.  Finding them will trigger a short examination in which Lara weighs in on the discovery as you are able to look at the object from all angles.  Sometimes doing so will reveal hidden engravings or information that will reward you with additional points. 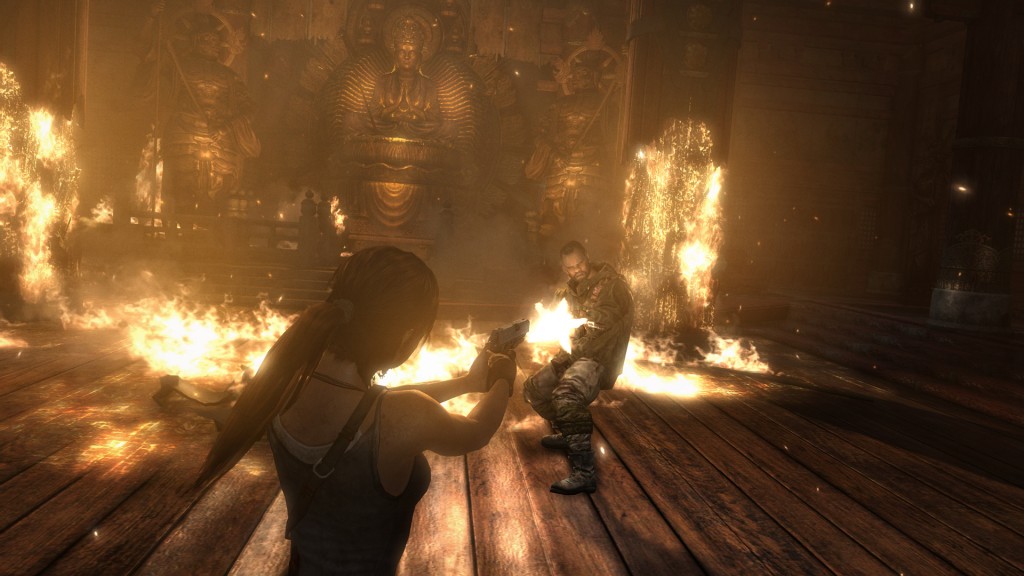 Even with the amazing graphics and engaging story, the best reason to give the game a try is the gameplay itself.  The controls are tight and super responsive with an intuitive and simple control scheme.  Quick-time events rely on the same button so you never need to pay such close attention to the prompts that you miss what’s actually happening on-screen.  I love the recoil present in the gunplay as well.  When Lara first picks up an automatic rifle, the gun jumps around quite a bit while firing – not so much that it’s impossible to hit anything, but enough that you feel like you’re firing a powerful weapon.  Like many other aspects of the game, skills and equipment can be improved to reduce these effects.  Using the bow and arrow makes great use of the game’s stealth mechanics, allowing you to silently kill enemies or shoot objects to make noise and create a diversion.  Speaking of stealth gameplay, I love the fact that Lara will instinctively take cover behind objects when applicable.  It works fantastically well and really helps to streamline the experience.

Basically, I can’t think of anything that Crystal Dynamics didn’t nail with this release.  The multiplayer component is lackluster, but it only serves as a tacked-on extra feature to grant a bit more staying power to the single-player package.  Overall, Tomb Raider has more than exceeded my lofty expectations and sets the bar pretty high for future games in the series.  I’d recommend you pick this one up ASAP – it’s likely to be one of the best titles released this year.