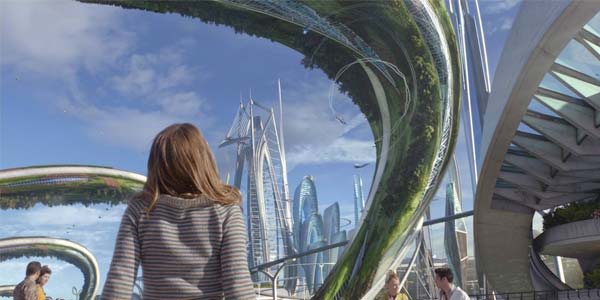 Watching Tomorrowland left my head filled with ideas based on the high concepts woven into the fabric of the film, beneath the surface of the unfocused, sort of dull story it sets out to tell.   Unfortunately, most of these ideas have been way, way more interesting than what we see in the movie itself.  Brad Bird and Damon Lindelof’s film is packed with heady themes and beautiful visuals, but fails to come together in any kind of satisfying, cohesive whole.  There are moments of absolute brilliance, and a handful of great performances by a strong cast, for sure, but these benefits cannot outweigh the lack of coherence that drags Tomorrowland down.

As this movie was being developed, Bird and Lindelof relied heavily on the profoundly annoying “Mystery Box” approach, but in the end it makes sense– this movie is hard to typify.  I mean, how can you boil down a story that is, in essence, an impassioned plea to dream of a more innocent future?  The convergence of retro nostalgia and the concept of tomorrow is great, and this clash seems rife with opportunity for an interesting science fiction tale, one with broader thematic concepts at play looking into what “the future” really even means.  But while Tomorrowland explores this a bit, it never fully commits, instead pulling back to leave enough time to set up and pay off an incredibly disappointing third act, which basically betrays much of what we’ve seen leading up to it.

Maybe it’s time to get a little specific?  Okay, here goes– the central concept of this film revolves around Tomorrowland, a utopia not unlike the ones dreamed up by Walt Disney himself, where the best and brightest minds of humanity could exist and think and create, unencumbered by the pitfalls and trappings of society (politics, money, war, bureaucrats, and other such usual suspects).  Talents like young Frank Walker are invited to Tomorrowland by a mysterious little girl named Athena… and we start the story with Frank’s entry to utopia, from which he is eventually ejected.

Cut to the modern day, and Casey Newton, a highly intelligent teenager who has made it her mission to sabotage the attempts to demolish one of NASA’s launch pads, becomes the latest Tomorrowland invitee, after Athena (still the exact same young girl) leaves her a pin which visually transports her to the city of tomorrow.  Casey’s search for answers about Tomorrowland leads her to an encounter with Athena, and soon enough an older, embittered Frank (George Clooney)… and establishes her as a target for homicidal humanoid robots that seem bent on stopping her (or at least Athena) from returning to Tomorrowland.

I don’t feel the need to recap any more plot than that, because A) no spoilers, and B) honestly, it really doesn’t matter too much, as the through line of the movie is incredibly loose and lacks a clear trajectory.  We learn the “shocking” truth about Tomorrowland in a scene toward the end, which leads immediately to the reveal of the villain, which then launches us directly into the finale and resolution… all in the span of, like, ten minutes.

That finale is the movie’s main failure.  While much of the movie is governed by some kind of cool themes– especially the importance of looking to the future with optimism instead of fear– the story is resolved not with words or thoughts or that all-important sense of hope that has driven our heroes, but with a fist fight between George Clooney and the bad guy, followed by a big ass explosion.  This is beyond terrible in every way possible, as it not only robs Casey (our protagonist, by the way) of her own heroic resolution, but posits that only another act of violence can correct what has gone wrong, even in the progressive utopia of Tomorrowland.

I would have been SO MUCH happier with a Star Trek-esque battle of wits, with Frank and Casey attempting to out-logic the (clearly flawed) belief system of the villain, leading to a resolution based on mutual understanding and a reverence for rational thought instead of punches and big CGI “splosions”… but maybe that would sell less tickets?

It’s a drag, because a smarter, less blockbuster ending would have underlined the themes of Tomorrowland, while separating it from its fellow blockbusters, offering something different than the CGI spectacle we’ve already seen in your Ages of Ultron and Jurassic Worlds.  In the end, despite some great performances from George Clooney, Britt Robertson and Hugh Laurie, and strong direction under the confident hand of Brad Bird, this movie’s uneven tone and intentionally muddled themes leave it fairly unraveled by the end.*

Aside from the less derivative ending I outlined above, I’d be equally fine with the movie standing behind its own convictions and delving into the idea that only through embracing the basest corners of human nature (violence) can we destroy in order to rebuild and advance.  But since Tomorrowland is a big budget summer blockbuster and not a low budget think piece, that layer of commentary is also non-existent in the film.  A friend who I saw this movie with remarked afterwards that she thought it would be way more effective if the story went incredibly dark, focusing on the conflict between Frank and his willfully superior rivals living in Tomorrowland, a look at the discrepancy between rational/ intelligent/ scientific advancement, and the perpetual conflict between individuals, which is seemingly inherent to human nature.  Can progress ever really get us past that?  I’m inclined to agree with her.  This also would have made for a vastly more interesting (if less box office friendly) version of pretty much the same movie… one that would have carried the themes Bird and Lindelof use as their starting points and carrying them to their logical, more challenging conclusions.

But at the end of the day, Tomorrowland is not that movie.  It’s a big budget, mid-summer contender for the “blockbuster of the year” crown… one that it ostensibly knows it can’t win.  Which makes its middle-of-the-road nature a true shame… given more freedom from the tropes of big budget popcorn movies, Tomorrowland could have been something fresh and intriguing, a sci-fi story whose themes and ramifications would have left us talking long after the credits rolled (see: Ex Machina).  But as it stands, what we get instead is, ultimately, likely to be the summer’s most forgettable contender.  Between the cast, and Bird and the intriguing themes at play..  it’s truly disappointing that mediocrity winds up being the final resting place of this utopia.

*One theme that remains intact, coincidentally enough, is the notion that ‘Tomorrowland’ would be ruined if its technological breakthroughs and advances were to be shared with the world at large; the weird Objectivist undertones of Bird’s ‘The Incredibles’ are very much expanded to this movie.  And it should be noted, while our heroes take issue with the lack of inclusion of the vast majority of humanity in regard to Tomorrowland’s breakthroughs… by the end, they seem equally disinterested in ‘going public’ with their new version of utopia.