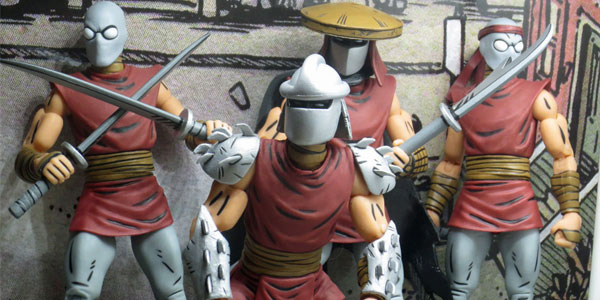 From video games and movies, to wild re-imaginings of iconic properties, 2016’s exciting variety of action figures was diverse and awesome. Here’s the best of the best.

I probably don’t have to tell you this, but 2016 kind of sucked. So it seems more important than ever to celebrate what was good this year, and one of the things I appreciate is how many amazing, creative, fun, and perfectly rendered action figures we were treated to. Everyone, from the smaller toymakers to the Big Two, released some incredible toys in 2016, and I’m making my picks for the ten best.  These all-time greats are some of my favorite figures, and have already become permanent fixtures in my collection.  Here’s why: 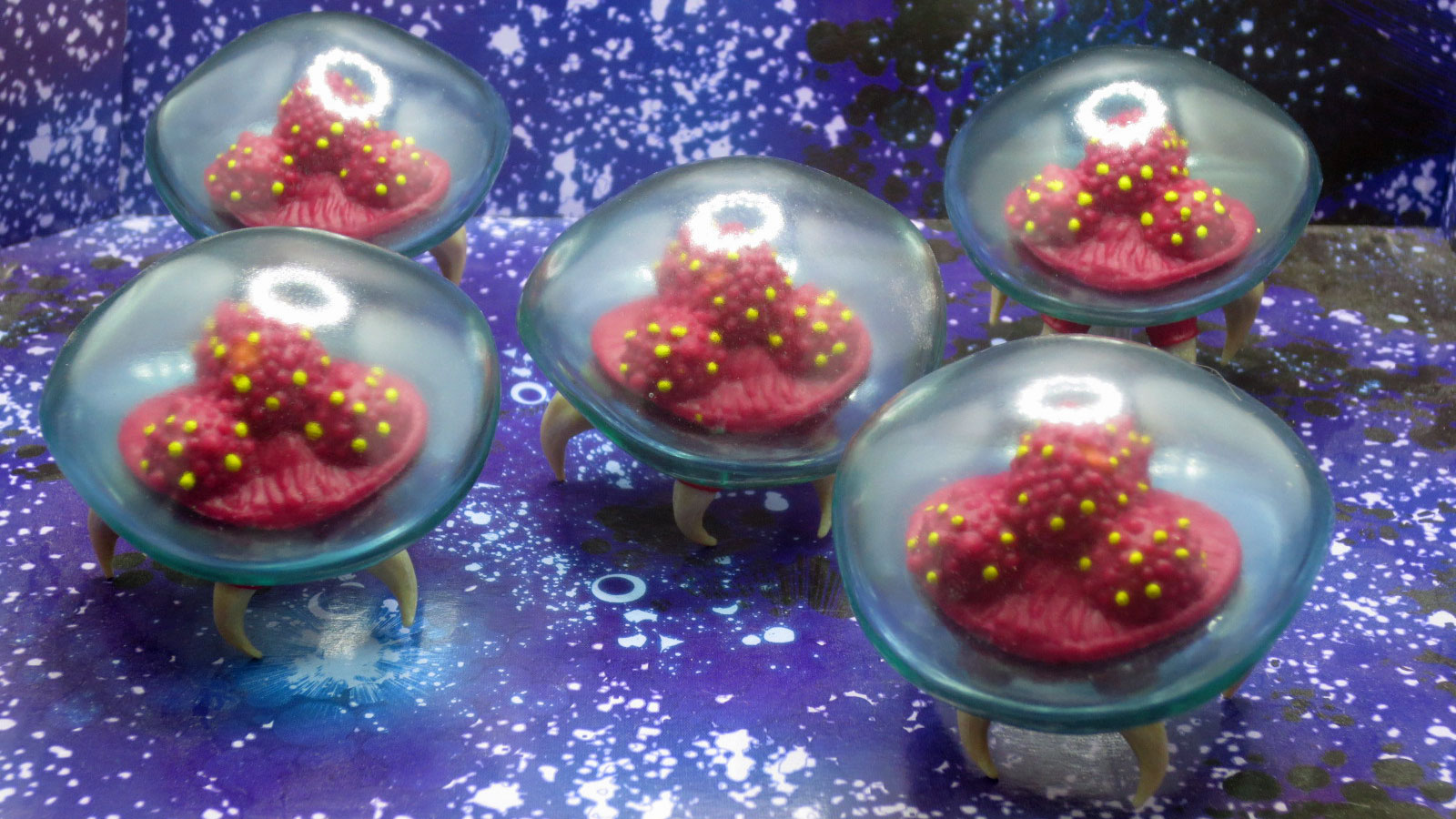 I used to consider Jakks Pacific’s World of Nintendo collection a nice companion piece to S.H. Figuarts’ high end import line, but 2016 was the year Jakks eclipsed Bandai Tamashii Nation in every way.  There were a ton of great releases, from the perfectly-realized Star Fox crew, to a multitude of new classic bad guys for Marion to fight, and more… but it was the new 2.5″ scale Metroid that was the big winner.

This creature is simple in design, with no articulation and only a few paint apps, but it’s a perfect rendering of its video game counterpart.  From the rubber green dome that makes up the top of the Metroid, to its four claws stemming from a sinewy body, this toy is exactly as creepy and cool as it should be.  Factor in the display stand, allowing your Metroid to float, and a price point of $5 or less, the Metroid was easily the most addictive army builder release of 2016.  To this day, if I find a Metroid on the shelf at the store… it’s probably coming home with me. 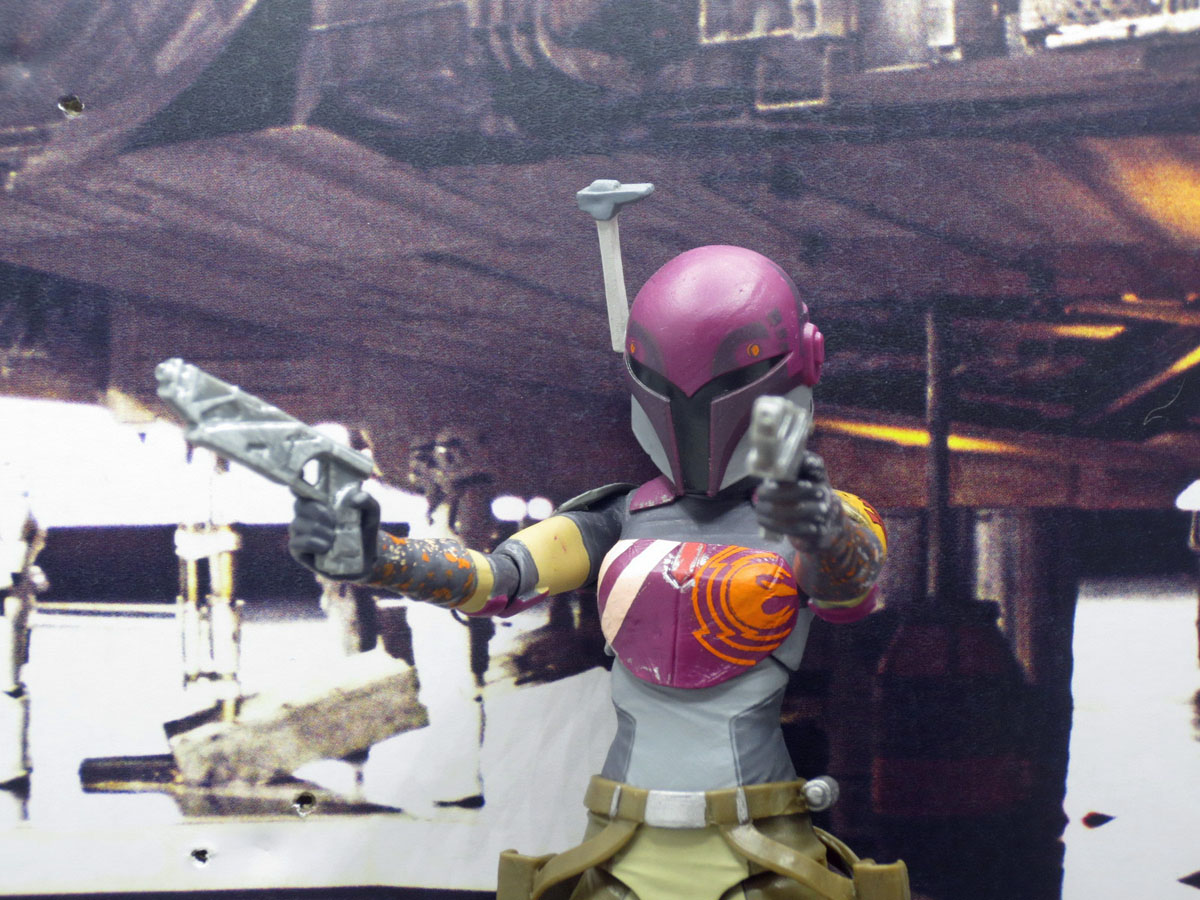 The Black Series had a good year in 2016, drawing from the Original Trilogy, The Force Awakens, Rogue One and Rebels to release some great 6″ scale renditions of modern Han Solo, classic C3PO, Ahsoka Tano, Director Krennic, Darth Revan, and so on… but if I had to pick the very BEST figure in an overall winning year, it would be Sabine Wren.

Our Mandalorian Rebel is adapted perfectly from her animated appearance to the realistic aesthetic of The Black Series, she’s loaded with great accessories– a pair of blasters with working holsters, a detonator, and a removable helmet!– and packed with useful articulation.  But it’s Sabine’s paint apps that give her the edge.  With loads of rich details in the tampo work of her armor and the graffiti paint splatter that adorns her costume, Sabine stands as the perfect counter point to anyone who argues Hasbro’s paint work is sub par.  Now, if only every Black Series release could sport this kind of great paint detail… 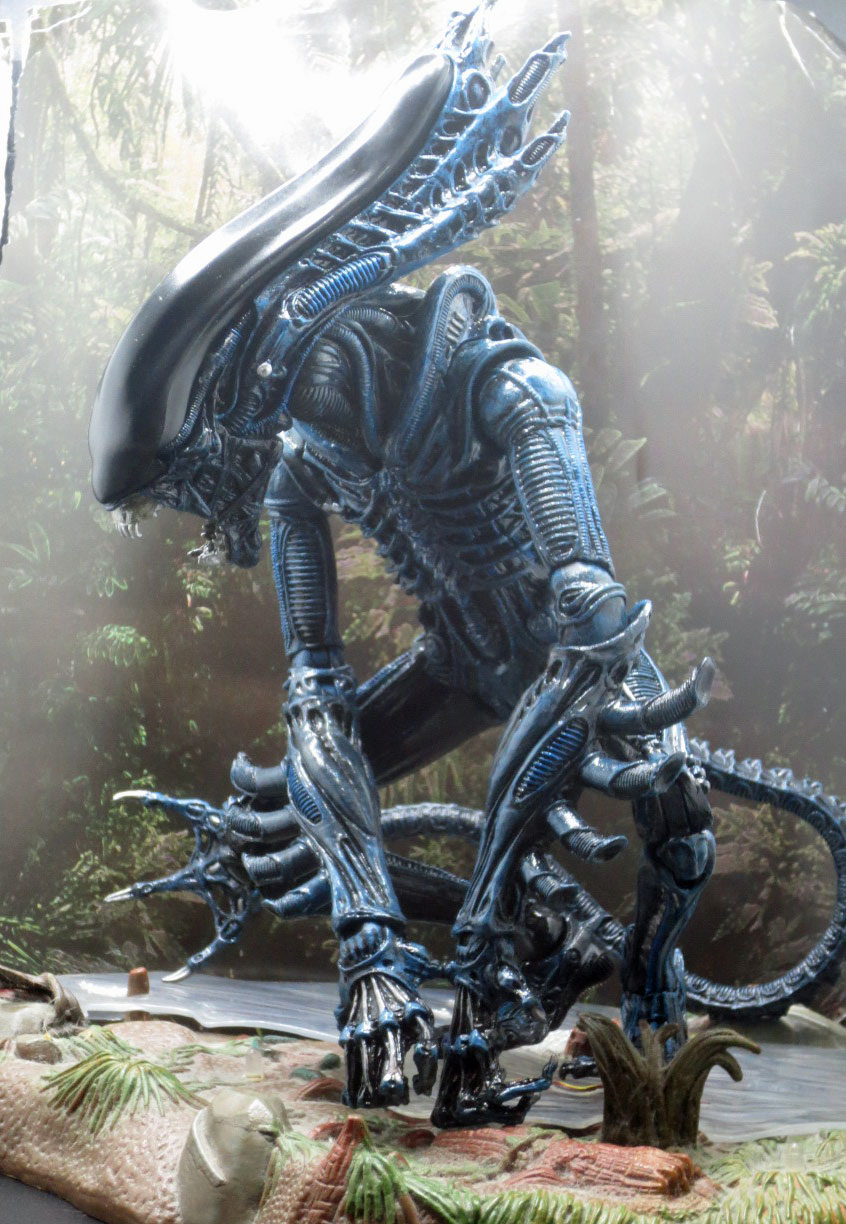 Another big winning toy line of 2016 is NECA’s Aliens collection.  It’s probably not a big spoiler that this series will make our Best Toy Lines list later this week, but for now let’s look at the Gorilla Alien, only recently released and already securing a spot among the best figures of 2016.  Part of the premiere wave of Kenner-inspired Aliens figures, the Gorilla has been anxiously anticipated since the top of the year… and the final product not only meets but exceeds those expectations.

The Gorilla makes perfect use of enough Xenomorph tooling to maintain continuity, along with new sculpting that dramatically changes the silhouette and proportions of this creature. It’s new headsculpt is a thing of beauty, as are the cool details worked into this figure, such as the anatomically correct crooked fingers with enlarged knuckles (as seen on real life gorilla skeletons, due to the weight they support on their hands), and the alternate black and clear domes, which give this Alien two unique looks, while also showing off even more wonderful detail on the ape-like skull beneath.

This figure is a masterwork in parts reuse, and the very best Xenomorph toy released this year. 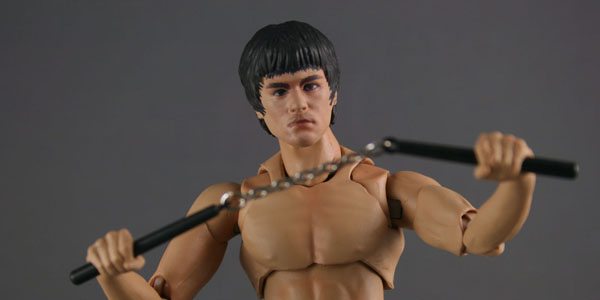 It floors me that there are so few really great martial arts cinema action figures out there. Sure, I loved the Bruce Lee minifigures, and NECA came very close to making their Shaw Brothers toy line a reality… but it wasn’t until S.H. Figuarts released their Bruce Lee toy early in 2016 that one of the icons of martial arts was truly given justice in toy form.

Bruce Lee is flawless, with two stunning portraits of Bruce Lee, a sculpt packed with realistic detail despite his simple shirtless, black panted appearance, and an incredible range of motion thanks to the (predictably) brilliant articulation design.

On top of this, Bruce is FUN! He’s got lots of alternate hand poses, and a number of weapons as seen in his greatest big screen fights.  Jay Q already released our official Top 10 Import Toys of the year earlier in the week, but Bruce Lee is so incredible, I had to bend the rules so I could include him here. 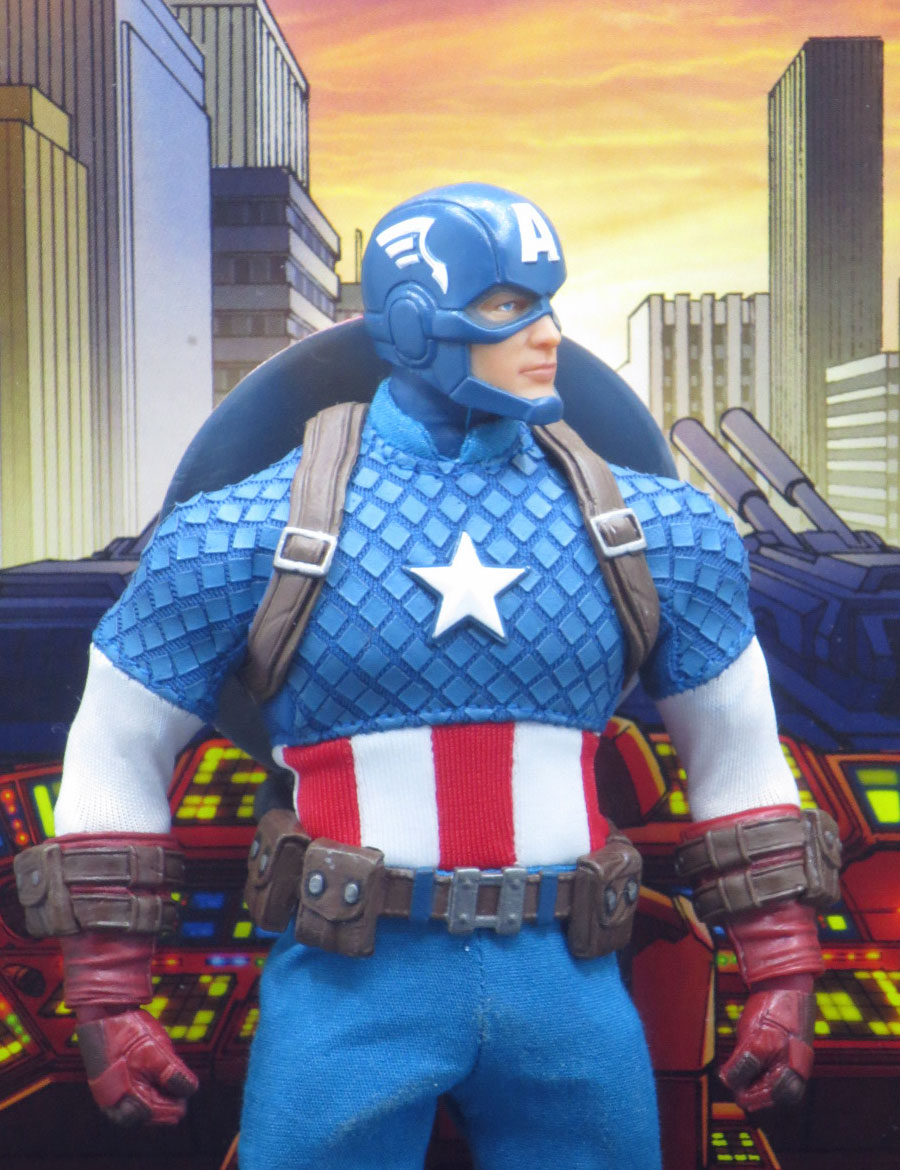 Mezco’s One: 12 Collective grew in a big way this year, adding Star Trek, Universal Monsters, Hannah Barbera, Marvel, and more to their previously released, unique take on the DC Universe.  And they dropped a lot of great figures in 2016 (with lots more on deck for the new year)… but the stand-out was, without a doubt, Captain America.

Cap is the perfect realization of Mezco’s approach to the Marvel Universe. He isn’t 100% accurate to the source material, and that’s by design.  Instead he takes Cap’s most iconic aesthetic and reimagines it into a real-world costume, upping the militaristic elements and muting the red, white, and blue colors while staying true to the original concept with an intricate pattern of chain mail armor on the upper torso, and– of course– that famous shield, which affixes to the figure’s arm or back thanks to a very innovative use of magnets.

I feel that Mezco’s Cap is the ultimate make-or-break decision maker as to whether you’re a fan of their One:12 aesthetic or not. But either way, it’s hard to deny he’s one of the best looking toys released this year. 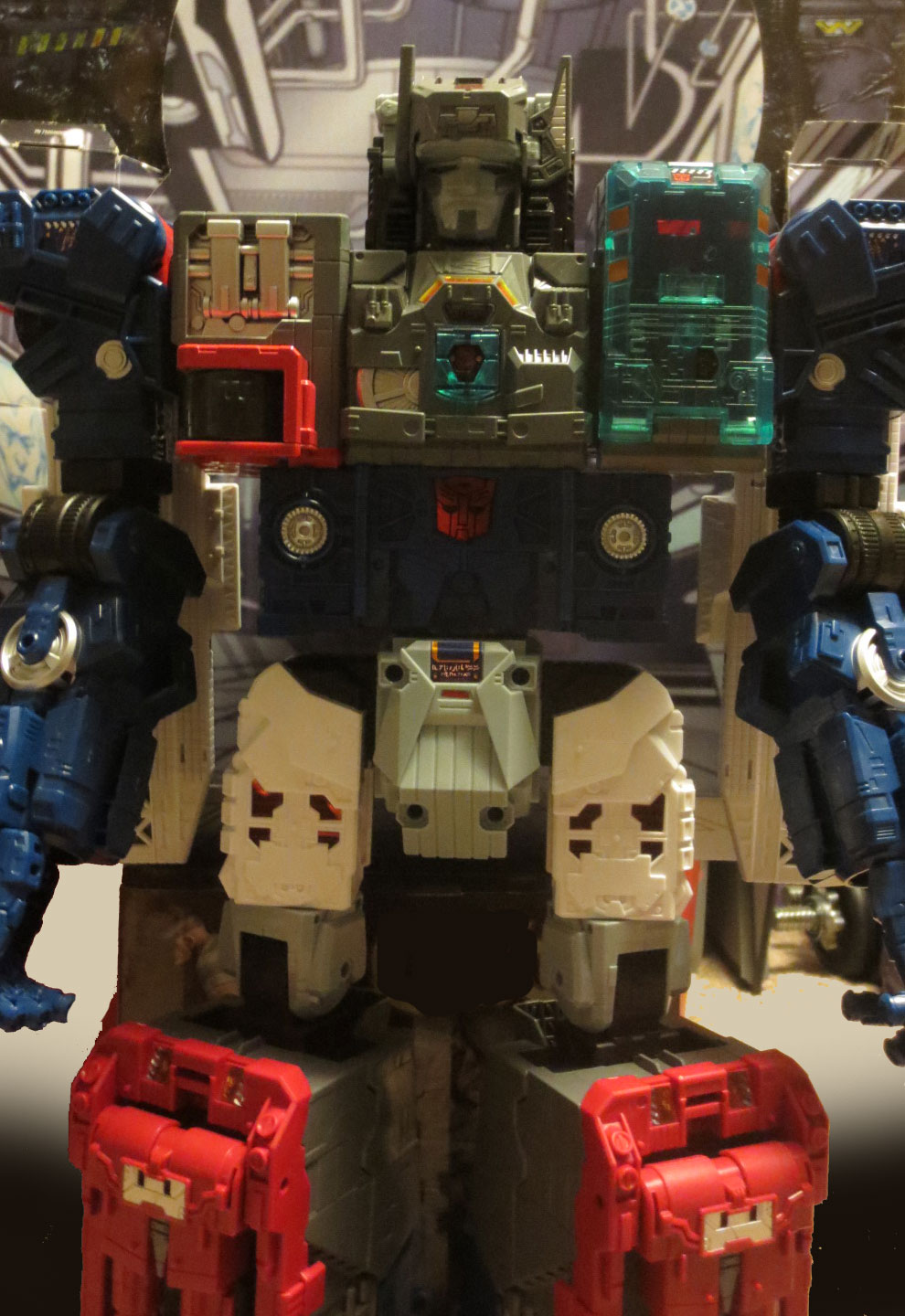 I’m not gonna lie, there were a LOT of awesome Transformers in 2016.  Hasbro’s Titans Return concept included some great left-field choices, alongside excellent new versions of classics like Soundwave, Hot Rod, and Blaster.  There were so many virtually perfect figures in this line, I decided to simply opt for the biggest to join this list.

That would be the new Fortress Maximus, a towering Titan measuring in at two feet tall, and jam packed with incredible G1-faithful detail, and lots and lots of play features, in both robot and city mode.  The sheer size of this toy is beyond impressive, but the fact that Hasbro connected him so perfectly to the Titans Return theme, while creating a toy perfectly playable in any of its various transformation modes, clearly earns Fortress Maximus a place in the Top 5 of 2016. 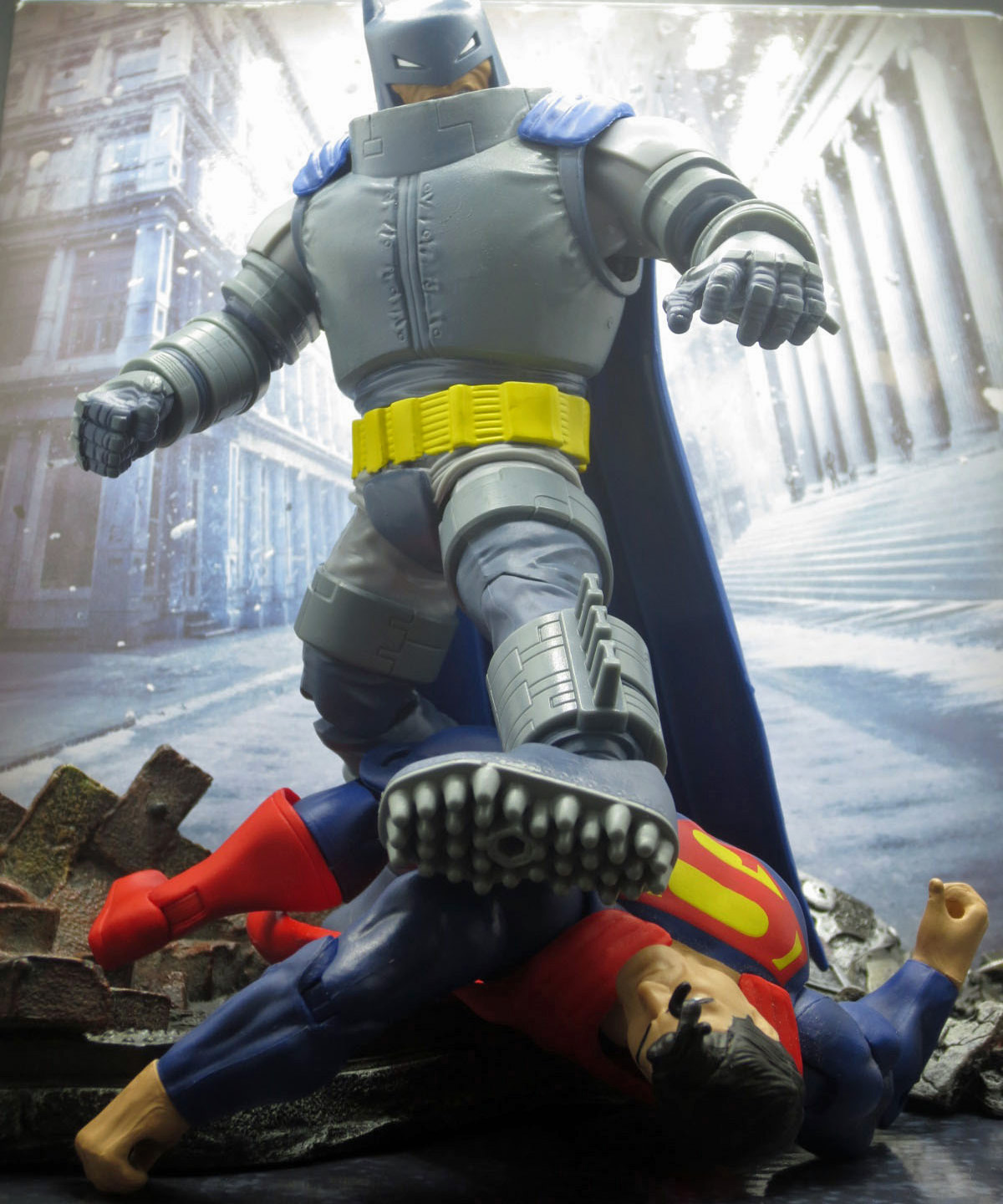 There have been a lot of great toys capturing the unique art style of Frank Miller over the years, but not until Mattel and the Four Horsemen has that formula been perfected to this degree. The Miller-inspired Dark Knight Returns figures within Mattel’s DC Multiverse are my favorite sub-set of figures since forever, but the armored Batman, from the miniseries’ epic final issue, is the king.

We’ve seen Mattel reuse the Horsemen’s MOTUC bodies to emulate Miller’s stocky art style before, but Armored Batman adds a wonderfully sculpted overlay of body armor to the torso, making this figure not only even more massive but also a perfect 3D adaptation of the original artwork. Extra tooling in the arms, legs, and the perfectly sculpted Miller Batman head left this figure feeling refreshingly unique in a toy line that has, many times in the past, been left stale due to rampant parts reuse.

But the Armored Batman doesn’t just serve as a perfect adaptation of Miller’s art. Because he was sculpted by the Horsemen, he also manages to retain a continuity within their work, making him fit in perfectly with both Miller’s style, and their own. That’s no small feat. 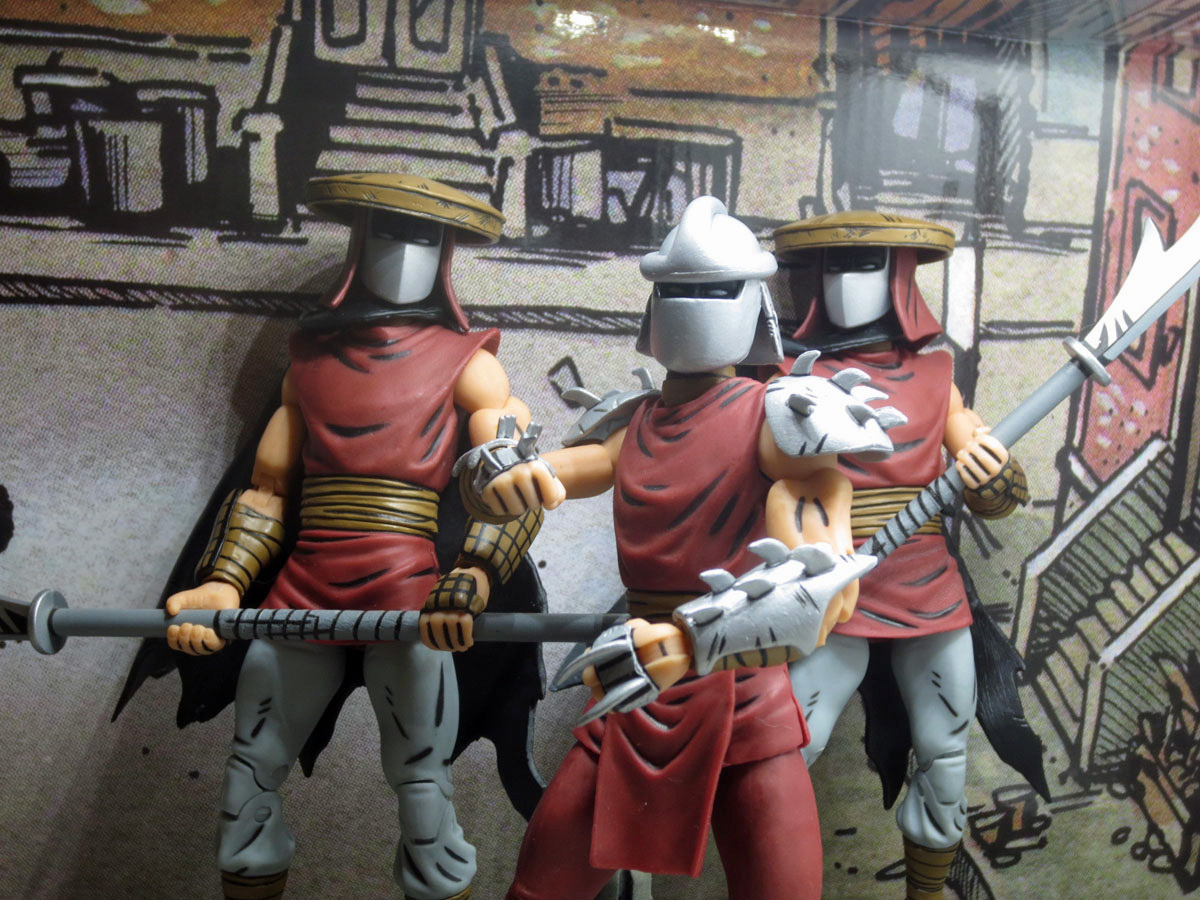 How many ways are there, in which to appreciate this figure?  As a long-lost relic of the past, an abandoned prototype NECA took ten years to make a reality?  As a perfect adaptation of the ink-heavy artwork of Mirage Studios’ original Teenage Mutant Ninja Turtles?  Or simply as the best iteration of The Shredder released in toy form this year?

Regardless of where you begin, the end result is the same– NECA’s Mirage Shredder is an outstanding figure. Perfectly in scale with their Mirage style Turtles, Shredder (along with his Foot Clan minions) finally closed the circle for NECA’s long-lost toy line.  And with loads of articulation, alternate hand poses, lots of weaponry, and an ink wash-inspired paint app, The Shredder seems every bit the equal of NECA’s Turtles, all-timers in their own right. 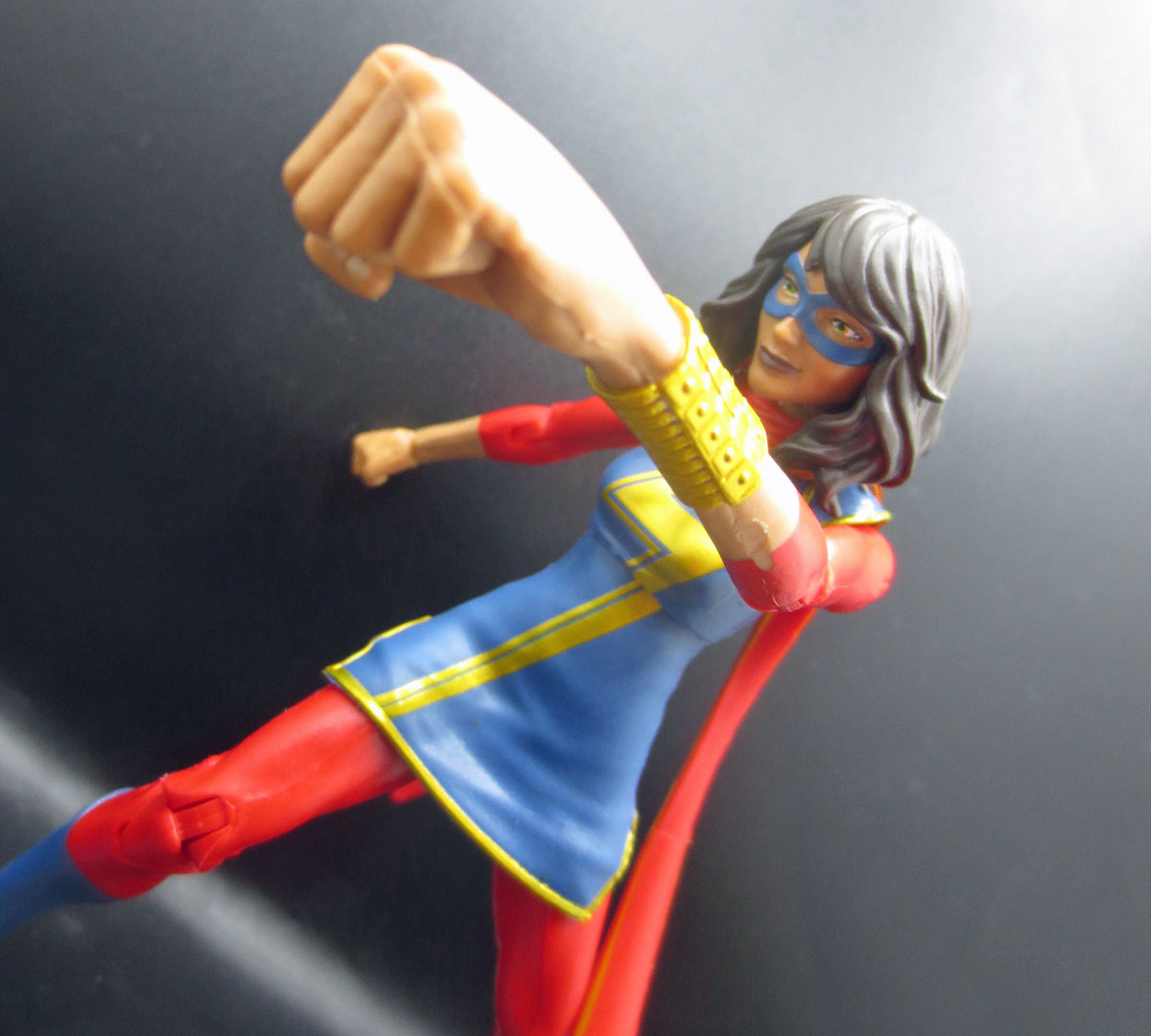 The last three figures on this list all followed a common theme. They are perfect toy interpretations of comic book characters.  But Hasbro’s Ms. Marvel edges out Shredder and Batman, thanks to her perfectly character appropriate accessories.

Using the Spider-Girl base body, Kamala Khan sports a great new portrait (I absolutely adore her mirthful half-smile), her bracelet, and two alternate oversized hands, which can easily swap out at her elbows to represent her Inhuman morphing ability.

These additional parts make Ms. Marvel feeling unique enough, but it’s important to also consider her context– this is an action figure of a teenage Muslim girl who has carved a unique place for herself in the Marvel Universe thanks to her great comic series, targeted at both male and female readers.  In that respect, Kamala’s existence in Hasbro’s Legends toy line not only feels good, it feels like validation, proof that the geek universe has a place for more than angry white dudes.  I can’t think of anything more empowering than that. 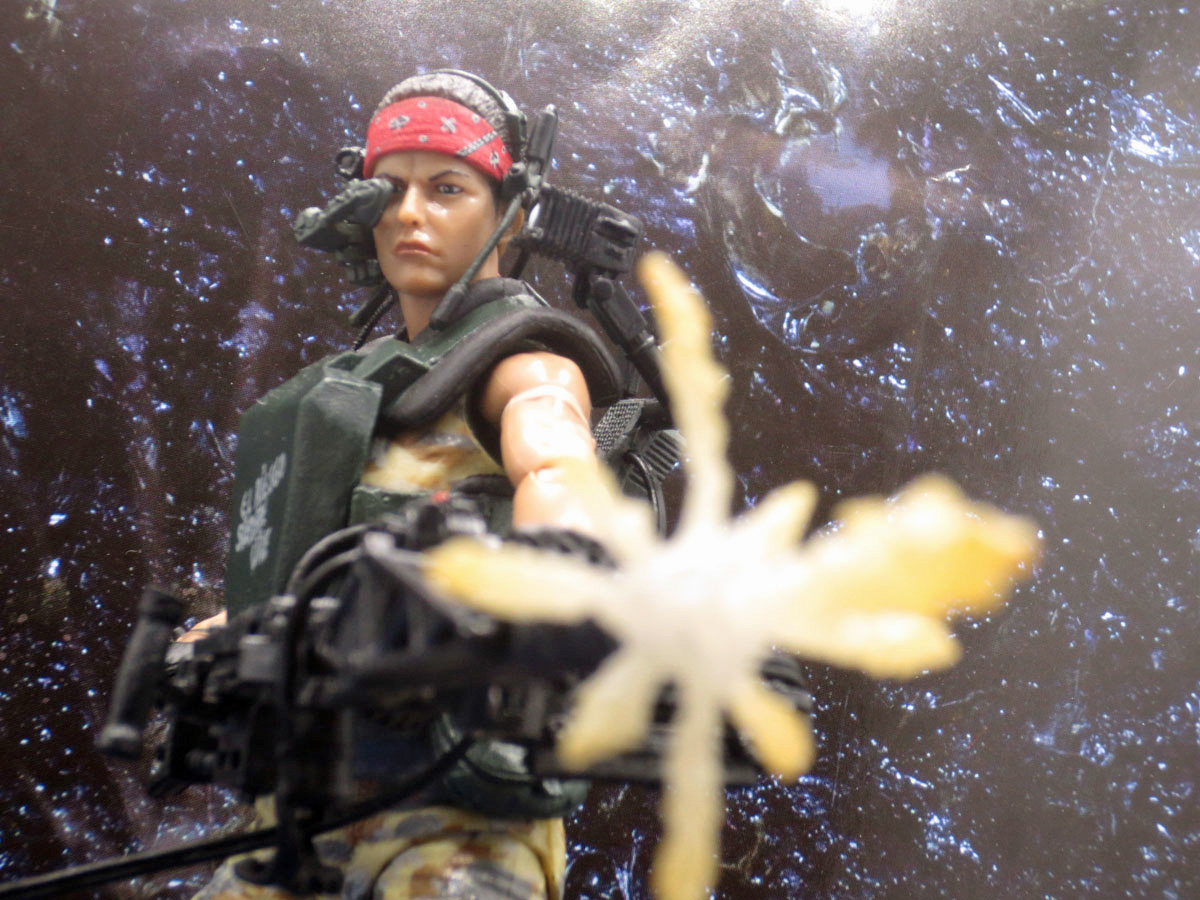 I know what you’re gonna say– of course, an Aliens figure gets the top spot… it’s from your favorite movie, ever. And yes, you’re not wrong, but hear me out.  Aside from Sigourney Weaver’s Ripley, Vasquez is one of the most iconic characters from James Cameron’s movie.  And, aside from Ripley, she’s been the most-wanted figure in NECA’s toy line since it made its debut.  Not only did 2016 finally see the release of Vasquez in toy form, but she was even better than we could have hoped for.

Whether it’s the intricate, highly detailed armor of her Smart Gun rig, or the spot-on portrait of Jeannette Goldstein, NECA positively nailed it with this figure.  She’s uncannily screen accurate, down to the smallest of details, remarkably well articulated, fun to pose and play around with, and perpetually cool looking.  The craftsmanship, detail, design, and likeness on this figure are so next level great, she transcends her already-awesome source material.  Pvt. Vasquez is so good, there’s really no way she can’t be considered the best action figure of the year.