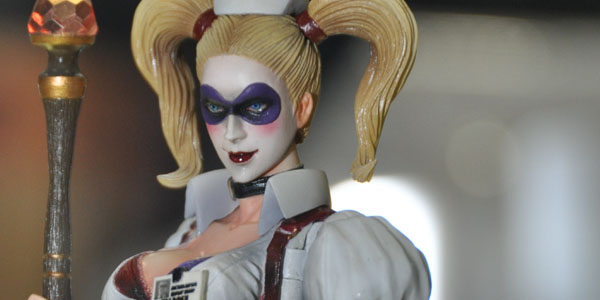 Square Enix/Play Arts Kai has a well-earned reputation for their quality output and fanatical attention to detail.  Without hesitation, I can tell you that their showing was what I personally was most looking forward to at Toy Fair 2012 and they did not disappoint.  Grab a towel and start drooling with anticipation of this year’s lineup. 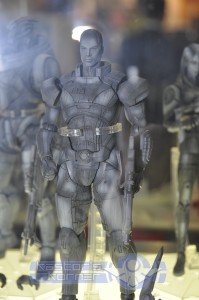 Let’s start with Square’s biggest reveal – prototypes of three figures pulled straight from Mass Effect 3.  Even in their unpainted, raw state, Commander Shepard, Garrus Vakarian, & Ashley Williams look incredible.  Although they are still pending licensor approval, they should have no problem getting the go-ahead with sculpts like these.  The level of detail in present in the armor, facial structure, and accessories on all characters is nothing short of astounding.  The right side of Garrus’ face looks to show minor scarring from the injuries he sustained in the second game.  Even his eyepiece is slightly separated from his face, sitting over a visible eye, when it clearly would have been easier just to sculpt it as one solid build (as it is on the Big Fish Toys version).  Square truly strives for an excellence that sets them apart from their competitors – in hindsight, Bioware should have really approached Square to make their figures in the first place.  While there are no plans to include helmets or breathers for the characters, they will include game-accurate weapons and alternate hands.  If the first wave does well (and I don’t see how it can’t) a female Shepard may also be in the works and, given the look of the new redheaded canon model, that figure is sure to be a knockout as well. 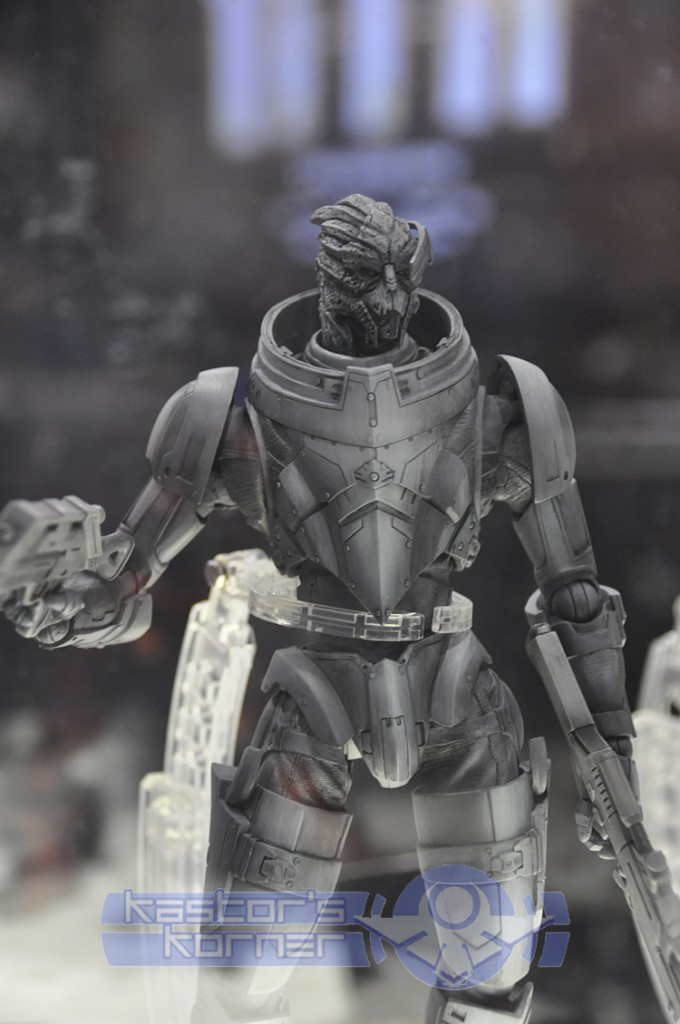 Next up, we have the newly unveiled Wave 2 for Square’s Arkham City-inspired Batman figures.  Complimenting Joker from the initial wave, Harley Quinn looks fantastic, featuring an out-of-this-world paint job and all the articulation and posability you’d expect from a Square/Play Arts product.  She’ll come packaged with an interchangeable hand and jewel-topped staff, but way cooler is the inclusion of a Scarface puppet!  The designers really nailed the look on this one, right down to her mischievous smirk.  Converse to Harley’s slender frame, their Armored Batman figure is a beast.  Covered in heavy armor plating and sporting a decked-out utility belt, he looks incredibly formidable.  Luckily, the extra bulk doesn’t look like it impedes the flexibility of the ample articulation the figure offers.  Packaged with an extra hand, batarang, and grappling gun, Armored Batman looks incredible and the paint job Square went with gives the gloves & gauntlets a decidedly weathered and battle-damaged look – like Bats has just finished beating the hell out of an army of henchmen.  Really cool stuff – be on the lookout for these this Summer.. 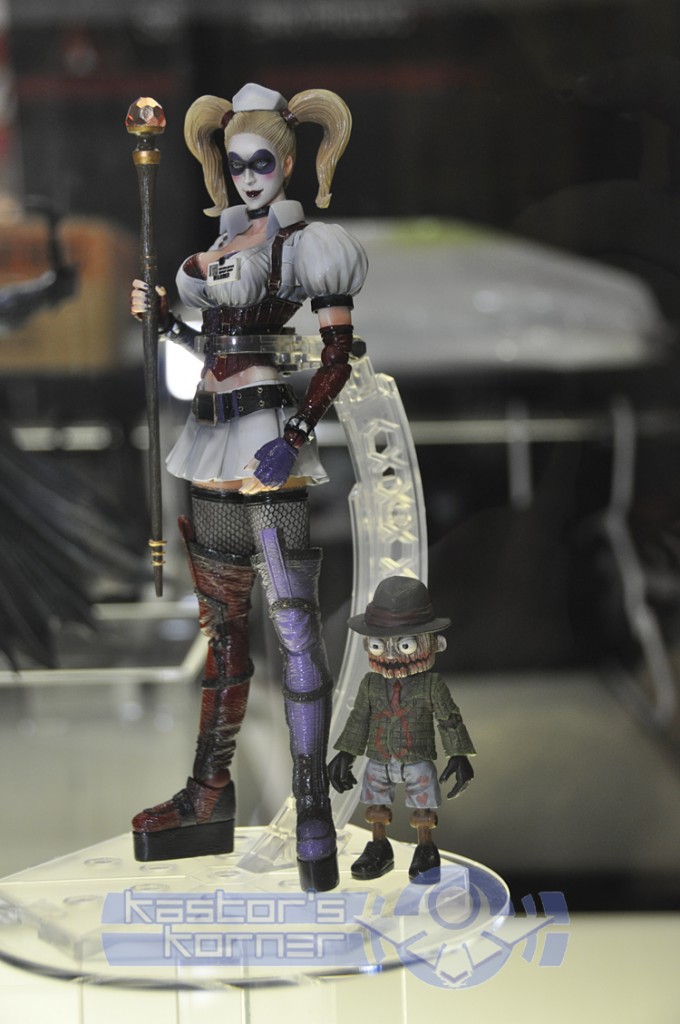 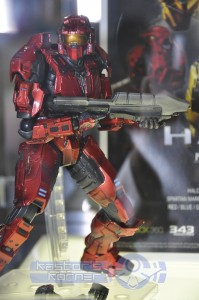 Square showed off some new Spartans from their excellent Halo line, this time with a “Red vs. Blue” theme.  As with their previous iterations of Master Chief-inspired Spartan figures, Square’s dedicated sculptors have produced such realistic, fully realized products that the armor covering them is actually more detailed than the textures presented in the original game.  Although more intricately rendered than their on-screen counterparts, their take on the Halo Universe has never come across as forced – rather their additions only make the overall design richer.  Aside from the aesthetics, no other Halo toys on the market can compare to the awesome flexibility of Square’s Spartans.  Regardless of which weapon you outfit them with, they can cradle or aim it in virtually any way a real person could and, even without one of their slick stands, the Spartans are easy to stand up on almost any position thanks to their solid, broad feet.  In addition, I should point out that there will also be a gold-colored Spartan that will be released as a Diamond USA exclusive. 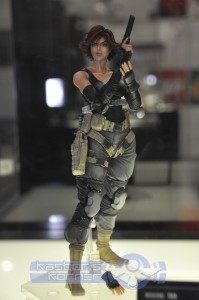 Metal Gear Solid, the most beloved title in the Metal Gear series, will be getting three incredible figures.  First, the Cyborg Ninja, who easily sports one of the coolest designs in the world of gaming.  Square got this spot-on.  Sporting his trademark sword and a glossy finish, it looks like he stepped off the screen and into the real world, albeit nine inches tall and at a much higher resolution.  Solid Snake will get a figure, this time as the younger, less haggard version that appeared in this game, complete with iconic headband and classic sneaking suit.  He’s bursting with muscle, endlessly posable, armed to the teeth, and loaded with detail.  The padded areas of his suit were so well designed that they look like they’ll have some “give” if you poked at them.  Rounding out the line is Meryl Silverburgh, who was sculpted with the exact cute and cocky expression that fans would expect.  Again, this figure is loaded with very usable articulation and demands to be played with.  The fine detail in the straps and buckles practically makes them look like real fabric.  Square actually worked closely with Yoji Shinkawa, character designer of the Metal Gear Solid series, who provided much insight as well as access to his design sketches.  From what we saw behind the glass at Toy Fair, it absolutely shows they went the extra mile to make these figures something special.  Now if only we can get them to make a Psycho Mantis figure… 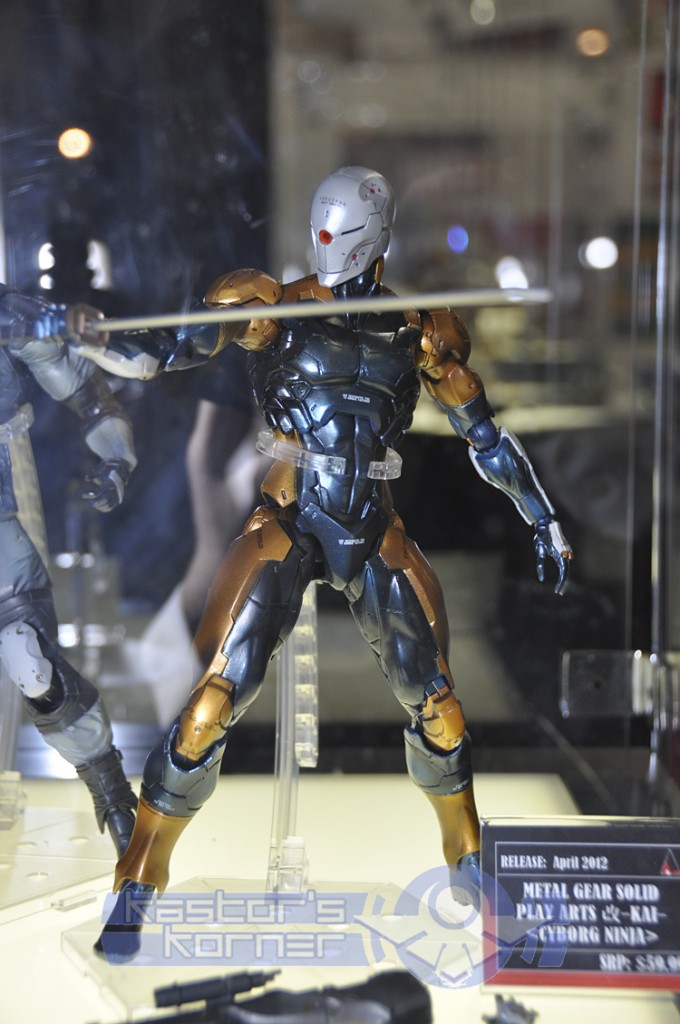 Final Fantasy had a large display, showcasing a number of different items at a variety of price points.  As one can imagine, Square’s prohibitive price point may keep some buyers at bay.  Their answer was to create awesome collectibles at an awesome value.  Mini-towels, mugs, bottles, and jewelry were on display along with some great mini figures.  The new Creatures Kai line looks fantastic, specifically their Marlboro design, which features a staggering amount of detail for a mini.  There were also Trading Arts Minis 2-packs with interchangeable faces shown.  Each squat character gets one alternate look and one blank face so the buyer can add their own DIY expression (such a cool idea).  Lightning and Serah from FFXIII-2 were displayed and look top-notch as well.  From their clothing to coloring to packaged accessories, everything is 100% game-accurate and incredible-looking.  Rounding out their FF area were a couple wall scrolls based on Square’s properties.  While more expensive than bootleg versions, the quality is endlessly better with a sturdy print material that’s much cleaner than simple cloth.  The hangers are also made with metal bars instead of plastic.  Basically, if you value the quality of your wall art, you want the real deal.

Next, we were shown Wave 2 of the Street Fighter line.  Hopefully any fan of the game is already familiar with Square’s sweet Ryu and Chun-Li figures that are already on the market.  Akuma looks monstrous (even larger than Ryu) and reuses no parts from prior models – it’s a 100% new sculpt.  The temptation is surely there to simply slap a new coat of paint on existing parts from Ryu seeing as their body type and garb is so similar, so I applaud their dedication to making unique pieces.  Adored with his large beaded necklace and rope bracelets, this figure just looks like he’s bursting at the seams with raw power and ready to jump up and deliver a Zankuu Hadouken to your face.  Cammy was shown taking full advantage of one of Square’s nifty stands while delivering a Cannon Drill.  The accessory that snaps onto her foot giving the illusion of a twirling energy field is a stroke of genius and looks brilliant.  All her trademark clothing is well-represented and great detail and her flowing braids give the figure a great sense of movement.  Given the rich character roster from the Street Fighter franchise (especially now including their crossover with Tekken) the sky is the limit as far as continuing with future waves, but Square has nothing further set in stone at the moment. 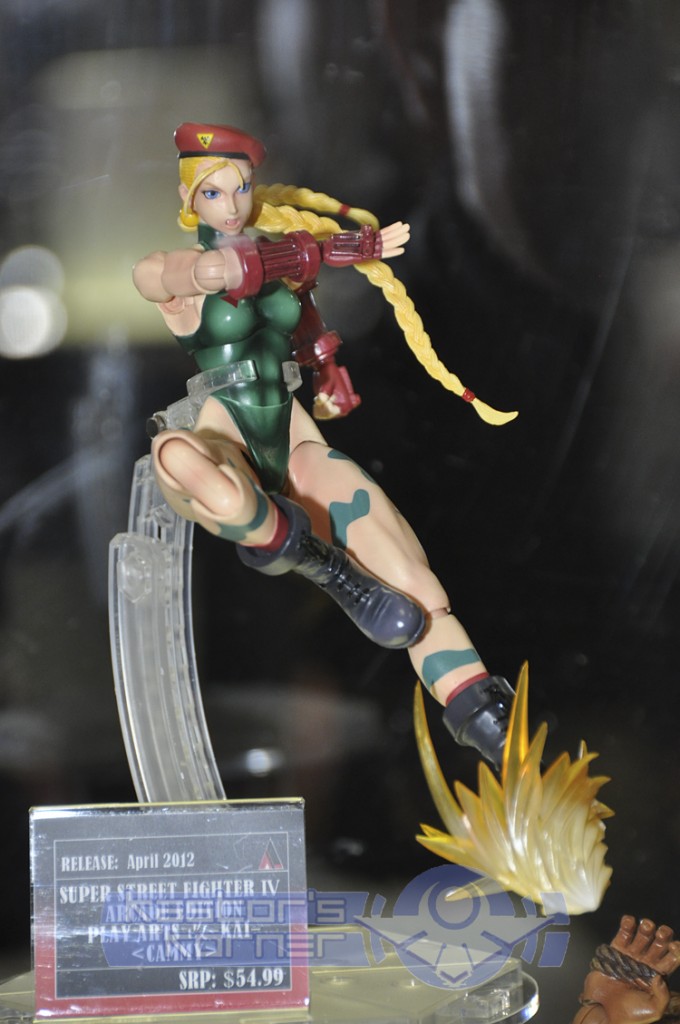 Finally, figures for Kratos and Nate Drake were displayed, pulled right from Playstation-exclusive titles God of War 3 and Uncharted 3, respectively.  At this point, it would be redundant to advise of the quality of the figures but, as the gallery photos show, each is game-accurate and loaded with articulation, allowing fans to pose their favorite characters any way they see fit.  The chains hanging from Kratos’s weapon are a great touch to an already stellar build.

Square Enix/Play Arts Kai’s Toy Fair 2012 lineup shows off several incredible pieces from a company who really knows its stuff.  It’s a testament to the skill and determination of their sculptors and designers that their toys look and feel as good as they do.  They may cost a bit more than other figures on the market but, as the saying goes, you get what you pay for.  Check out their existing lines at Square’s US online store.  Many of the items described above can even be pre-ordered now from BigBadToyStore.com