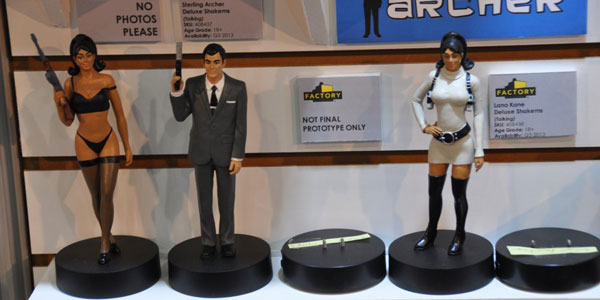 Factory Entertainment made a splash with several new lines on display at Toy Fair, including a multi-format product line based on Archer, the funniest show on television.

Factory Entertainment landed the merchandise license for Archer, the hilarious FX animated series focusing on Sterling Archer and his dysfunctional secret agent friends at ISIS.  Factory will release a series of plush dolls, 6″ action figures and Shakems motion statues (think bobbleheads, but without the super deformed proportions).  As an added bonus, the Shakems’ bases include a voice chip, so each statue will speak several memorable (and hilarious) lines from the show… in the actors’ voices!

On display at Toy Fair were the first three Shakems– Archer himself in his grey suit, Lana Kane in her sweater skirt, and a variant Lana in her lingerie, which will be the company’s first San Diego Comic Con exclusive.  The statues looked pretty good, at about a 7″ scale, and should look great in any display. Plush dolls include Sterling and Lana, along with the wee baby Seamus (yes, he even has the Archer tattoo embroidered on his shoulder), and Pam’s HR dolphin puppet, which is a must-have for any fan of the show.

A 3D concept of the first 6″ figure was also on display.  Archer himself will be the first release, but Factory plans to release as many figures from the crazy cast of characters as possible– Each is planned to have a minimum of 18 points of articulation and character appropriate accessories.  Archer will come packing his gun with silencer, the freak out bag and a decanter complete with glass.

For future figures in the assortment, Factory is feeling out who the best choices would be.  While Lana seems obvious, their feedback has shown even greater demand for other iconic characters like Krieger.  They are considering a fan poll to let fans of the series vote on who deserves the toy treatment following our hapless hero, which sounds like a great idea to me!

In addition to Archer, Factory also showed off their other licensed products, including Game of Thrones.  Based on the HBO series, Factory will release plush dragon eggs and dire wolf pups, as well as sigil pillows, shaped like shields, which include the coat of arms and family phrase of each main house in the fantasy series.

Factory Entertainment had a great display, and their 2013 products are filled with cool potential. I can’t wait to see how the final products turn out… and I’m dying to add some of these pieces to my collection!

The Archer products launch with the Shakems and plus in July (right around Comic Con) and the 6″ figure should follow shortly thereafter. 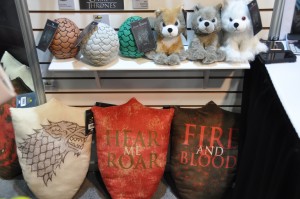 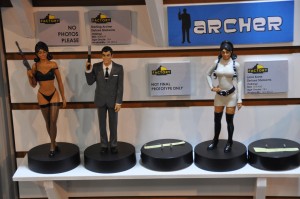 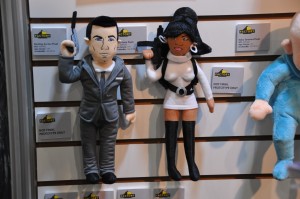 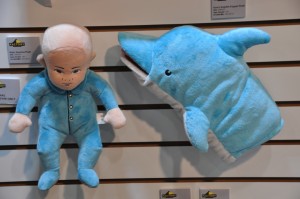 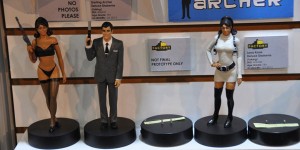