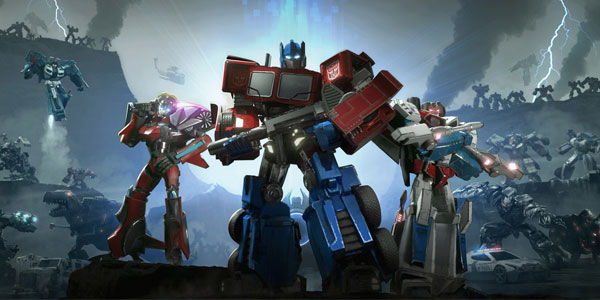 The new mobile app game from Kabam and Hasbro brings the Transformers universe together, and these robots are ready to fight.

To quote Mike, while their Marvel game was like a first child, Transformers is like its younger sibling, one who received nothing but tender love and care from its creators.  The end result is awesome– Forged To Fight is the most ambitious Transformers game of all time, incorporating characters from G1, Beast Wars, comic books, Michael Bay’s movies, and Hasbro’s iconic toy line into a single continuity, based on a story Kabam developed with the team at Hasbro.

The game will feature a story mode, rolling out an ongoing tale of Optimus Prime crash landing on an alien world where his fellow Autobots and Decepticons alike are not acting as he would expect, leading to team-ups and clashes which no one sees coming.  But not unlike Contest of Champions, the main feature of this game is the one-on-one combat, which can pit a vast array of Autobots and Decepticons against one another in combat.

I had the chance to play the versus mode of the game, and can attest that it provides a solid challenge, while the controls are straightforward and smoothly operated. A 2D combat arena didn’t work for this game and these characters, so a deeper 3D backdrop was developed, allowing your Transformer to dodge as well as block, attack in both close quarters (with fists) or at long range (with blasters).  It wouldn’t be Transformers if these guys didn’t transform, and Kabam made a very smart choice by featuring vehicle modes as signature special attacks each player can perform.

One thing Kabam took advantage of with this game was the fact that its player avatars are robots, meaning as combat continues, your character and its opponent both degrade, revealing damage, exposed wires, electrical sparks, and more.  This is a luxury they couldn’t afford in a game centered on humans (traditionally filled with blood and guts instead of wires and circuits) but Kabam took full advantage of the degradation feature in the world of Transformers.

As far as I’m concerned, this original game is a must-download on day one.  The concept of including every major iteration of the long-running Transformers franchise into this game makes things exciting and unpredictable, as players amass their armies of Robots in Disguise, and the combat functionality is smooth and straightforward, while spotlighting the perfect amount of damage and devastation to ground this game in all the right ways.  And Kabam already confirmed that the game will continue to grow, even after launch, with more stories and new characters being added to the mix.

You can read more about Transformers: Forged To Fight below, as well as watch a trailer for the game.  The mobile app is rolling out now around the globe, and will be available for free in the United States at TransformersForgedToFight.com this Spring.

Transformers: Forged to Fight will give players access to nearly every phase of the Transformers franchise history, challenging fans and players to assemble the ultimate team of Transformers. Players will be able to collect iconic characters from every Transformers generation, including Autobots and Decepticons from the animated series and Paramount’s blockbuster films, as well as fan-favorites from the Transformers comic book series and Hasbro’s massive catalog of figures.

In TRANSFORMERS: Forged to Fight, explore an epic new universe where multiple realities collide to form a massive planetary battlefield. Players will assemble a team of Autobots and Decepticons from across time and space to fight against a world of corrupted Transformers and their villainous overlords. The game features amazing visuals, intense one-on-one battles, meaningful robot to vehicle converting action and deep RPG elements. Transformers such as Optimus Prime, Bumblebee, Megatron, Starscream and Grimlock will level up over time, unleashing powerful new abilities and devastating robot-vehicle attacks.

The game is being developed by Kabam Vancouver, the masterminds behind longtime chart-topper MARVEL: Contest of Champions and will roll out in the App Store and Google Play in Spring 2017.