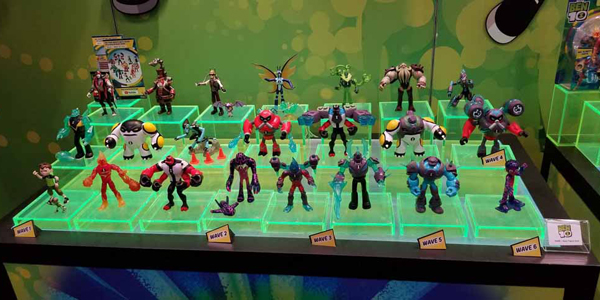 There was a lot more than Teenage Mutant Ninja Turtles at Playmates’ Toy Fair showroom this year.

2020 is going to be a very interesting year for Playmates. While the past half decade saw the majority of their Toy Fair showroom dedicated to Teenage Mutant Ninja Turtles, this year’s display was much more diverse, with no new TMNT product to be seen (more on that shortly). Instead what we did see was some new products for Ben 10 (including the first, ever Omnitrix watch that actually tells time), a second wave of Power Players action figures, role play, and more due out in the Fall, and some all new lines.

One I think is definitely worth highlighting is Miraculous: Tales of Ladybug & Cat Noir, which Playmates is taking over from Bandai America, and based on the showcase at Toy Fair, the Ladybug license is now in much better hands. Playmates showed off a full line of well sculpted and highly articulated 5″ action figures and 12″ dolls based on the animated series, which is finding a new home with Disney. I’ll admit I’m not too dialed in to this show, but the toys looked really cool!

As I said earlier, no new TMNT product was on display, apart from some previously released Rise of the Ninja Turtles toys already at retail. The reason behind this is Nickelodeon, who apparently have a new iteration of the Turtles waiting in the wings, to be announced this Spring. I’m sure whatever that is will be supported by a toy line later in the year, but the impression that I got during my tour of Playmates’ booth at Toy Fair is, Rise is pretty much done at this point.

Frustratingly, the most intriguing stuff Playmates has cooking this year was off limits to press. There’s apparently a bunch more product in the works for the Godzilla vs. Kong toy line, which is presumably being hidden from the press to prevent movie spoilers. And even more interesting, Playmates will be launching a toy line based on Billie Eilish, including 6″ action figures and 10″ fashion dolls, designed after some of Billie’s most iconic music video looks. Unsurprisingly, Billie herself has apparently been very hands-on with the development of this toy line, and while I didn’t have the opportunity to see the prototypes at Toy Fair, I’m definitely interested in checking them out when they get revealed.

As near and dear as TMNT is to my heart, seeing a range this diverse of toys and properties out of Playmates made this one of my most exciting visits with them at Toy Fair, ever. Check out photos from their showcase below!\