The Toy Fair Dilemma: The Collector Brain vs The Dad Brain 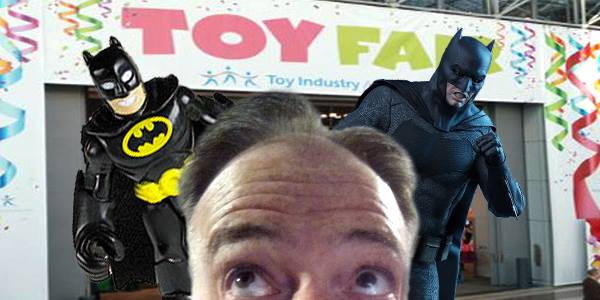 Two minds in one head are gonna make me explode.

This has been my tenth Toy Fair, and as always, I loved it. But, I find things are really changing when it comes to how I feel about all the toys themselves. Becoming a dad four years ago totally changed my perspective on how I look at Toy Fair.

When I went to my first Toy Fair, I was just starting up my own geek website. I wanted to see if I could cover the event better than the other sites out there. I was full of piss and vinegar, and I was pretty excited– for the first time ever, I was going to see all these toys before anyone else! It was an amazing experience, with a definite learning curve.

Over the next couple of years, I made better contacts, got into more booths, and saw some really cool stuff. I wanted to buy everything there, and for a while, I did buy a lot of it. At the time, I had a room in my place that housed all my collectibles. It didn’t please the wife that much, but heck, I’m allowed to have some fun.
It wasn’t until my son was born in the summer of 2012 that things started to change. Before I knew it, February 2013 rolled around and things started ramping up for Toy Fair again. And as I was preparing for the event, setting up my appointments, I was still as giddy as I was for my first Toy Fair.

Toy Fair opened up that year with Hasbro’s presentation of their collectibles lines. As is usual with Hasbro, after the presentation, we were allowed to roam around the rest of the showroom and check out their other brands. The funny thing is, instead of hanging out in the Marvel part of the showroom, I found myself spending more time in the Playskool area. I was more interested in seeing the kid toys than anything else. It was really weird… I told my friends that I got stuck in “dad mode.”

But, it didn’t end there. After I made it through all my appointments that year, I had some time to walk around the Toy Fair floor, and once again, I found myself checking out baby and pre-school toys. I ended up taking pictures of those toys, not to report on, but to show my wife some of the things that I thought would be great for our kid.

And ever since then, I can’t get out of this dad state of mind! I know there’s still a collector inside me somewhere, and I still see stuff I want to get for myself, but it’s always overwritten by the “dad brain.”

Maybe when my kid is older, I’ll start getting that collector mindset back. But for right now, no matter how much I get excited for Toy Fair (and can’t wait to see all the stuff I want to add to my collection), it’s really the toys for my kid that I’d much rather spend my money on right now.