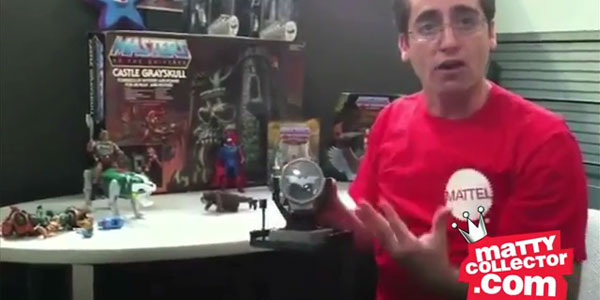 Matty Collector brand manager Scott Neitlich is back with a new YouTube update, and this time he’s showcasing Snake Man-At-Arms and the Griffin (both available in the next few days), as well as the completed Batsignal from the Dark Knight Rises Movie Masters.

The “Build a Batsignal” concept being tied in to the six-figure Dark Knight Rises Movie Masters is pure win, and I’m anxiously awaiting completing the Dark Knight’s signature display piece as soon as possible.  There’s four pieces floating at retail now, packed with Catwoman, Alfred, Bane and the Batman rehash, with the final two pieces on their way along with GCPD Officer Blake and the sixth figure, whose identity remains a mystery.

We got to see a prototype of the full signal at Toy Fair, but this is our first look at the final production model, and Neitlich shows off how it works as well… Not only does the signal look cool– perfect for your movie or DC Universe shelf– but it lights up… There was a rumor that it projects the signal as well, but Neitlich doesn’t go into that in this demo, so whether it’s powerful enough to cast the sign of the Bat on your wall (or fridge, or cat) remains to be seen.

Either way, it’s a cool demo, and one that has me more intrigued than ever by this set… almost as intrigued as that Castle Grayskull box in the background.