Toys R Us Is Leaving Its Flagship In Times Square 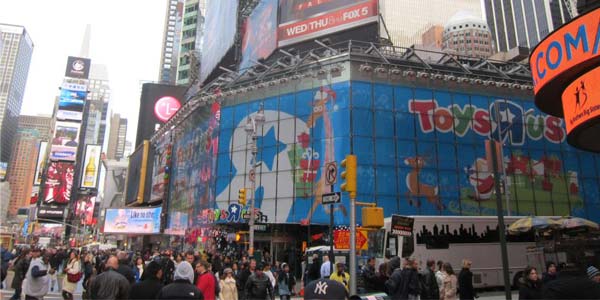 “The world’s biggest toy store” may get slightly smaller in 2016.

If you’re a toy collector visiting Manhattan, chances are– like a moth to a flame– you’ve felt the magnetic sway of Toys R Us Times Square.  Sure, logically we all know its 110,000 square feet contain the same stuff you’d find at any other Toys R Us (only slightly more expensive, because, Times Square).  But it’s an experience all the same, a trip definitely worth taking.

I only made two purchases ever at this store. I found Hasbro’s Marvel Legends two-packs when they air shipped a small “preview wave” of them to Times Square during New York Comic Con that year.  And way before that, I scored the full set of Marvel Legends Series 10, immediately dropping my other plans so I could double back to my hotel room and build my first Sentinel.  My at the time, soon-to-be girlfriend was amused (oh, to be young and naive).

Aside from those fluke finds, I never visited TRU Times Square intending to treasure hunt.  It was always about the experience of seeing a toy store that BIG.  It was seeing the neon lights of the full-size ferris wheel in the center of the store.  Paying my respects to the life size Tyrannosaurus Rex that hovers over the action figure section, the tyrant king of collectors.  It’s the flagship store for Toys R Us, and they really took that term to heart with designing the place.

I’m a little bummed that Toys R Us’ lease ends next February.  I always make it a point to try and stop in during Toy Fair every year… but by the time Toy Fair hits in 2016, TRU Times Square will likely be gone.  I think it’s safe to assume– based on the anemic state of the toy industry overall– if Toys R Us moves the flagship to a new location near Times Square, it will be a smaller storefront.  I’m hoping if that IS the case, they bring some of the fun tourist-y theme park charm of the old location along with them.  If not, well… dibs on the Tyrannosaurus?