With Marvel Agents of S.H.I.E.L.D. introducing us to this version of the Ghost Rider, I wanted to read up on him to better know what we are going to see this season. 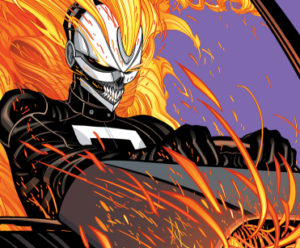 This comic is an example of how to take a well known character and change him for the better. Ghost Rider has always been interesting, but the biblical tones along with the long character history made it hard to keep up with. With this series, we are introduced to a brand new Ghost Rider without so much baggage.

Robbie Reyes is a teenager in high school, he must look after and support his wheelchair-bound little brother, Gabe, in the absence of his parents, and work an after-school job at a body shop. They live in a crime-ridden neighborhood in LA (which in and of itself changes the entire dynamic of the comic), gangs operating on every street corner, drugs and guns everywhere, while Robbie spends each day telling himself he’ll get them out there. One day Gabe is beaten up by some thugs from Robbie’s school and his electric wheelchair gets stolen. It becomes the last straw and Robbie knows he has to do something drastic to get them out of that neighborhood. He steals a souped-up gangster car and enters an illegal street race with a big cash prize that is enough to start over with a new life. Robbie ends up stealing the wrong car. There are bags of a new pill (created by the evil Dr Zabo) in the car which his private army of mercenaries hunt and kill Robbie for. As his life drifts away from him, Robbie’s pain and rage calls out to a kindred spirit – the Spirit of Vengeance!

The spirit he uses for his powers is mysterious and interesting, setting up a great subplot of who it actually is and why it picked Robbie of all people. Writer Felipe Smith really went above and beyond to give us something special. The enemies and story Robbie faces feel fresh and different from the escapades of Johnny Blaze, and though Robbie is worried about these powers, he enjoys them as well. The enemies he faces give him the perfect challenge and aren’t over the top, end the world enemies, keeping the street feel of the story. And the art by Tradd Moore is phenomenal. The over the top style fits the character as well as the location, with colors and designs resembling street art found throughout LA.

I hope they stick to some of the material for the show. This TPB was a nice read and a nice change of pace, JQ gives this a 7/10.