TPB Pick of the Week: American Dream- Beyond Courage 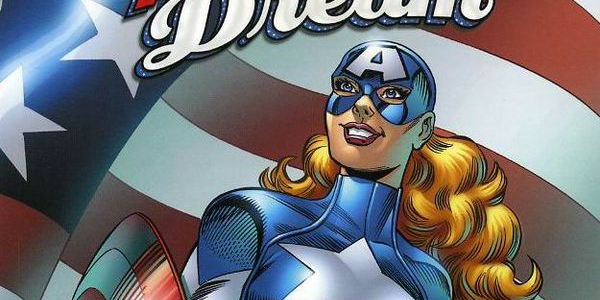 When looking at the TPB rack this week I noticed a blonde female Captain America and grabbed American Dream- Beyond Courage to take a look. So what better way to spend the Forth of July weekend than with a Captain America book.

The American Dream was created by Tom Defalco and Brent Anderson. The issues collected in this TPB were drawn by Todd Nauck and there is nothing bad to say about his art. So before we hit the back story of the book let me tell you some about the American Dream.

Growing up as the niece of S.H.I.E.L.D. Agent Sharon Carter, Shannon Carter idolized Captain America and was hired by Jarvis to give tours of the Avengers Mansion when it was a museum. Her strength and agility come from intense physical training and when a New Avengers Team was being form she was determined to join up. When she helped save the Avengers from a darker version of the them from a parallel world, Captain America deemed her worthy to wear the costume and gave her the shield of the evil Cap. Before gaining the shield she used disc much like The Amazing Ricochet used.

This TPB collects issues 1-5 of the quickly sold out mini series. As Shannon struggles to balance her personal life and her new superhero life, the hunt for her fiance takes her on a collision course with a new terrifying villain. Can Shannon find balance between herself and the American Dream?

After reading this I became interested in her origin and looked for back issues and although this character is not currently being used in the Marvel Comics Universe (she was recently used by Marvel Superhero Squad Online and voiced by Tara Strong), I do believe that she would be a cool character to reintroduce in a company that is struggling to find a strong female lead. American Dream: Beyond Courage gets a 7/10.